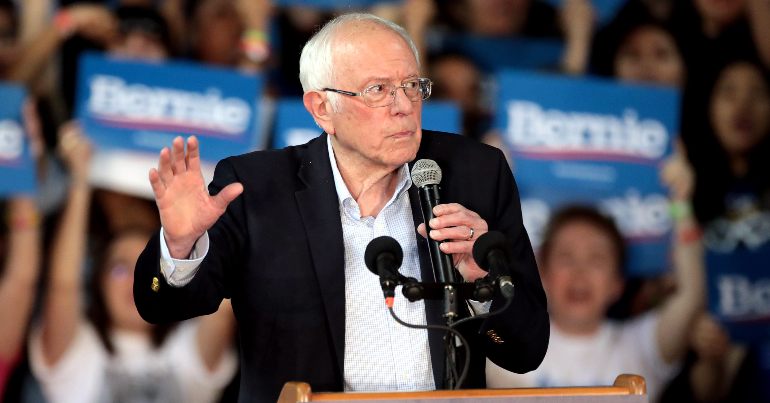 Bernie Sanders has withdrawn from the Democratic Party primary. This has prompted a fierce debate about what went wrong. While he clearly faced unfair disadvantages from the start, progressives must also accept that he made some unnecessary mistakes. And if we’re going to win victories in the future, we must learn from them.

Unfair from the get-go…

On 8 April, Sanders live-streamed an announcement online in which he confirmed rumors that he was suspending his campaign. He emphasized that the coronavirus (Covid-19) crisis was a large part of why he made his decision. And while he indicated that he’d work with establishment rival and presumptive Democratic nominee Joe Biden to face Donald Trump in November’s presidential election, he stopped short of unequivocally endorsing him.

As The Canary previously reported, the race was never a fair one. The favored establishment candidates had inbuilt fundraising advantages due to their willingness to accept corporate donations. Mainstream media coverage has also severely disadvantaged Sanders, with even purportedly left-of-center TV stations like MSNBC portraying him in a negative light.

…but also some unforced errors

However, there are also some crucial unforced errors that Sanders made throughout the campaign. One was his failure to connect with the majority of African-American voters, who ended up supporting Biden. The sad irony is that Biden has let the African-American community down throughout his political career. For example, he consistently supported of reactionary ‘law and order’ measures that have led to mass incarceration and have had a disproportionate impact on Americans of color.

African-American leader Jesse Jackson did endorse Sanders. But by that stage, it was largely too little, too late; and traditional African-American voters had largely mobilized around Biden. This strange affection for the establishment wing of the Democratic Party on the part of (mostly older) African-Americans probably has an element of ‘Stockholm syndrome’ to it. But it also probably owes in part to the fact that Biden and the Clintons have done more to court their vote. Rather than following suit, Sanders failed to show up at crucially important rallies in the US South – where many African-Americans live – as ‘Super Tuesday’ and ‘Super Tuesday 2’ approached.

The biggest blunder of all? Being too polite.

But all of this pales in comparison to Sanders’s biggest mistake of all – his unwillingness to aggressively attack Biden for his sordid political record. As Branko Marcetic points in his recent book Yesterday’s Man: The Case Against Joe Biden, Biden forged close relationships with corporate donors like DuPont Chemical and multiple credit-card companies, who bankrolled many of his election campaigns. Biden returned the favor by supporting so-called ‘pro-business’ deregulatory policies.

Sanders scarcely brought any of this up during any of the debates or his public addresses. Rather, he spoke of Joe Biden in largely positive terms just as he had with Hillary Clinton during the 2016 Democratic Party primary race. The reality is that neither of these figures were deserving of such treatment, especially when considering their records on foreign policy.

Both Biden and Clinton supported the disastrous invasion of Iraq, for example, which according to some estimates led to the deaths of millions of people. Also, they are both indelibly tarnished by their association with the sordid foreign policy record of the Obama administration (Clinton served as its secretary of state). This included supporting a coup in Honduras in 2009; a drone-strike campaign that dwarfed even that of George W. Bush; increasing troop numbers in Iraq and Afghanistan; and fawning treatment of the governments of Israel and Saudi Arabia – two of the worst human rights violators in the Middle East. But rather than going on the attack and calling Biden and Clinton out on this record, Sanders essentially put on kid gloves in debates and other public appearances.

Over in the UK, former Labour leader Jeremy Corbyn made the mistake of giving too many concessions to establishment political rivals and their corporate-media allies, tacitly accepting the premise that their attacks were being waged in good faith. And while Sanders responded to attacks better, he also failed to fully articulate his opponents’ motives – i.e. that entrenched power feared the threat that a genuinely progressive president would pose to the status quo.

On both sides of the Atlantic, Corbyn and Sanders have inspired and mobilised millions. But sadly, they both failed to win power. Rather than dwelling on that failure, though, we must learn from it. And the biggest lesson is that we must stop being so deferential to our enemies.