If you take a look at the 'Save The Sun' crowdfunder, all is not what it seems - The Canary 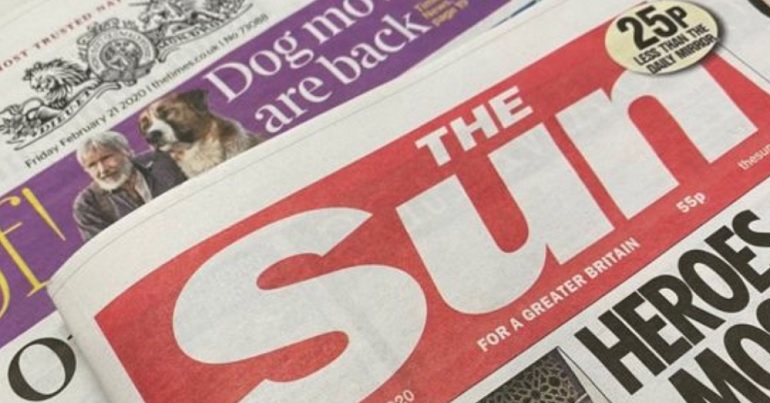 A crowdfunding campaign to “Save The Sun Newspaper” has raised thousands of pounds. But all is not what it seems. Because far from trying to help the beleaguered right-wing tabloid, it’s actually raising money for foodbanks.

As BBC News reported, the Rupert Murdoch owned paper is having problems. His company News Group Newspapers lost £68m in 2019. Some of this was down to a £26.7m legal bill over the phone hacking scandal. And BBC News also noted:

Daily sales of the Sun fell 8% to 1.38 million in the year to July, but it remains the UK’s top paid-for paper.

Meanwhile, the Sun on Sunday sold an average of 1.16 million copies a week, 111,000 fewer than the year before.

But since the coronavirus (Covid-19) pandemic hit, things for the tabloid seem to have gotten worse. The Sun‘s executive editor Dan Wootton was essentially begging people to buy copies of the tabloid:

Britain's brilliant newspapers provide a lifeline of trusted information for millions during this crisis. A paper costs less than a cup of coffee. Do your bit and keep journalism alive for future generations. #buyapaper

For many people, buying a copy of the Sun could be problematic. Not least because of its historical reporting of the Hillsborough disaster. Or its general support since 1979 for the Conservative Party (and Tony Blair). Then there was its treatment of the late Caroline Flack. And there’s a whole host of other problems with the tabloid.

But one person has had a genius idea not only to emphasise the contempt many people feel for the paper, but to do a good turn at the same time.

Simon Harris is running a “Save The Sun Newspaper” crowdfunder. But he’s done it with a twist. Harris has styled the crowdfunding page as a campaign to save the tabloid. But when you read down to the bottom, he’s actually raising money for foodbanks.

Harris at first gives the impression he will donate all proceeds of the crowdfunder to buying the Sun:

I will take every penny that is donated to this fundraising campaign and every day I will use it to buy copies of The Sun from my local store, and then deliver them absolutely free of charge to homes in my local area in South Essex. If other people follow my lead and set up their own fundraising campaigns, we could send their circulation through the roof in a matter of days!

But he foresees certain problems that could get in the way of this goal. They are:

During the lockdown, it’s taking ages to get my kids to bed every night, and usually by the time they have settled down my local Sainsbury’s is closed. If this happens on any particular day, I will donate the money to local food banks instead.

I don’t like rain, so if it is raining on any particular day I will donate any money collected to local food banks instead.

I don’t like sun or wind either, so if it is sunny or windy on any particular day I will donate any money collected to local food banks instead. I’m not fond of clouds either.

You get the idea.

Doing more than a “sh*t rag” ever has

If you actually think that I am giving that sh*t rag a single penny of this instead of donating the money to local food banks, you’re very much mistaken.

At the time of publishing, the crowdfunder had raised over £17,000 for Essex Coronavirus Action foodbank and support appeal. So, it seems a dose of humour, coupled with an inspired idea, can get results for those most in need during the pandemic. Which is surely a damn sight more than the Sun itself is doing.