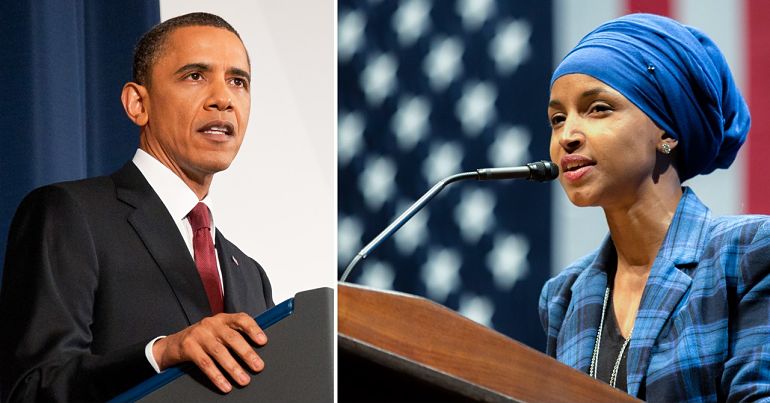 The “hope and change” offered by former President Barack Obama was a “mirage”, according to Muslim congresswoman Ilhan Omar.

She made the comments during a recent interview with Politico. Politico contrasted Omar, a newly elected US Democratic Party representative from Minnesota, with Dean Phillips, a wealthy businessman. Minnesotans also recently elected Phillips to congress, whom Politico characterised as a centrist and pragmatist.

Even Bernie Sanders, the self-proclaimed democratic socialist, and fellow ‘democratic socialist’ Alexandria Ocasio-Cortez have never dared to make such criticisms of Obama. But the former refugee from Somalia pulled no punches during this interview. According to the article, Omar ‘recalled’:

the “caging of kids” at the U.S.-Mexico border and the “droning of countries around the world” on Obama’s watch.

Obama “embraced” and expanded the drone programme, that philosopher Noam Chomsky called the world’s “most extreme terrorist campaign of modern times”. Obama’s government launched “ten times more strikes” than the previous administration of George W Bush. Somalia is one of those countries that continues to suffer as a result of the covert wars pushed by former presidents Bush and Obama and now by current president Donald Trump.

According to Politico, Omar critiqued the US Democratic Party as being ‘complicit’ in perpetuating the status quo. Omar said:

We can’t be only upset with Trump… His policies are bad, but many of the people who came before him also had really bad policies. They just were more polished than he was.

The smearing of the progressive-left

The political and media classes in the US have repeatedly misrepresented and smeared Omar as an antisemite, because of her critiques of the Israeli state and the pro-Israel lobby in the US. The smears and racism Omar has faced very much replicates the smearing of the anti-racist left in the UK.

Her latest comments about Obama and the Democratic Party are unlikely to win her friends among the ‘centrists’ in her party. But then again, anything short of renouncing her progressive values is unlikely to win her real support from the establishment Democrats.

It’s about results, not resolutions

She expressed frustration that many of her colleagues don’t seem to understand that Americans:

And she emphasised that:

we have to be willing to have those conversations.

Omar is clearly focused on major progressive reforms. Which is why the attacks against her by the political and media establishment will never end. It’s also why she’ll require continued support from the wider US population if the popular policies she supports are to become a reality.