Despite claiming he lied, the DUP is still asking Boris Johnson for help - Canary 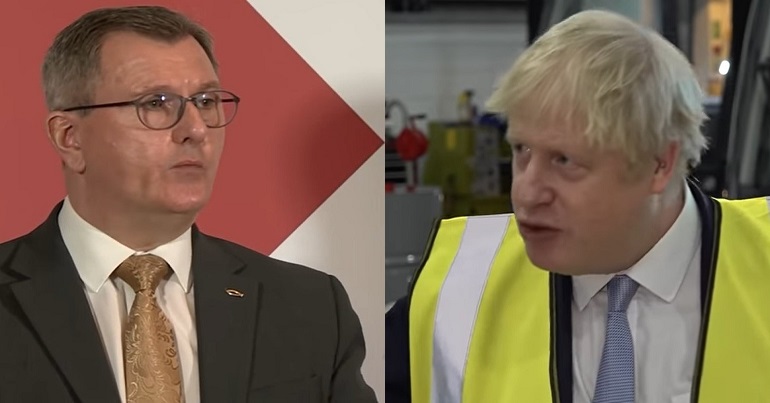 As I’ve argued before, there’s nothing that complicated about politics in the north of Ireland. Nor is there anything that complicated about the DUP’s latest efforts to collapse the power sharing government (called Stormont) in the north. Put simply, this is damage limitation for the DUP’s Brexit balls up and the notorious Northern Ireland Protocol (NIP) that followed.

This self-inflicted harm is costing the DUP quite severely. Brexit has weakened its precious union. And according to opinion polls, it’s losing voter support. This is support which it’ll want to regain ahead of elections in the north scheduled for 5 May 2022. The DUP’s response to this self-inflicted shambles? Appeal to a lying Boris Johnson, who it also claims lied to them over the NIP, for help:

BREAK: DUP leader Sir Jeffrey Donaldson urges Boris Johnson to “do what other PMs did” and prioritise the crisis in Northern Ireland, instead of being distracted by controversies in Downing Street. Watch full interview on @RidgeOnSunday @SkyNews. pic.twitter.com/oW1yiS10ri

The DUP effectively collapsed the government in the north when its first minister Paul Givan resigned on 3 February. And it may not even have the three months between now and May to put things right. To begin with, its current government partner Sinn Féin is calling for early elections:

Essential that parties work quickly to get legislation through the Assembly. Executive now unable to function. DUP action mean budget & health investment stalled. Limbo around lifting of Covid restrictions. In absence of functioning executive an early election must be called pic.twitter.com/2WFd6DSnh5

But even if those elections don’t come early, according to opinion polls, Sinn Féin looks set to become the largest single party in the north. Moreover, Givan’s resignation has serious consequences, because it means local government can’t approve future spending on schools and hospitals. Additionally, an official apology to victims of institutional abuse won’t now happen in March, as was initially planned.

A quick reminder on Brexit

Despite not being able to convince a majority of people in the north of Ireland to vote Leave, we can’t forget the sordid role the DUP played in promoting Brexit in 2016. And there were plenty of people to remind the DUP of this and how it’s now trying to avoid blame:

The reasons we are in crisis are

1. certain people pursuing a reckless Brexit with little regard to the impact on NI; and

To blame for instability in N.Ireland

The DUP who championed the hardest #brexit and collapsed the powersharing Executive https://t.co/6kHVc9RIWc

The DUP championed #brexit, they then rejected every iteration of it that would have limited its impact on our economy and communities – against the democratic wishes and best interests of people here.

The DUP owns Brexit and they own it’s consequences! https://t.co/RQoxbb5sue

The DUP’s Brexit position has been described as “a huge strategic error”:

Gavin Barwell, Theresa May’s former chief of staff says “It should now be clear to the DUP that supporting Brexit was a huge strategic error for them & unionism. It’s reduced support for the Union & it’s led to a border in the Irish Sea.” https://t.co/SXgjpFzkEC

But RTE‘s David McCullagh was on the ball in pointing out DUP contradictions to MP Gavin Robinson:

RTE interviewer asks DUP MP Gavin Robinson: Are you working for the other guys? 😁 pic.twitter.com/2detjNFyoi

There’s nothing new in the DUP collapsing Stormont. It last collapsed it in January 2017 when Arlene Foster refused to step aside pending an investigation into the Renewable Heat Incentive (RHI) financial scandal. And the absolute stupidity of the DUP appealing to a British prime minister isn’t new either:

The DUP lost two of its MPs at the 2019 general election. It’s currently performing poorly in the polls. And if those polls are reflected in the next Stormont elections, Sinn Féin will become, for the first time ever, the largest party in Stormont. It would then hold the position of first minister – also for the first time ever.

It could be too late for the DUP to undo this self-inflicted electoral damage. But appealing to a lying prime minister, when the mainstream English media appears to care so little about Stormont, reads like an act of desperation. It would serve the people of the north a lot better if the DUP dropped its Brexit rhetoric and helped tackle the serious issues that probably matter most to voters.