Loyalist rioting isn't at all 'complicated'. It's just history repeating itself. - Canary 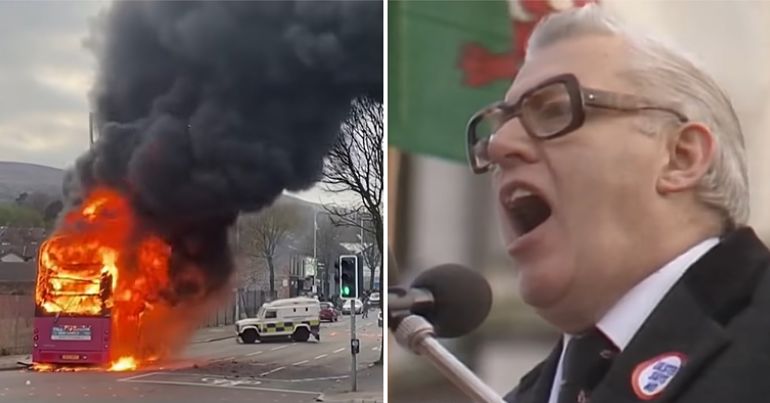 On 9 April, when writing in Byline Times about British loyalist rioting in the north of Ireland, Otto English (Andrew Scott) wrote:

The roots of the violence that flared up over the past week on the streets of Belfast are like everything else in Northern Irish politics – complicated.

And, given English’s approach to that article, you’d have to agree that politics in the north of Ireland is indeed “complicated”. Because before dealing with the “complicated” matter of loyalist rioting, English wrote four paragraphs (195 words) implicating Irish republicans in those riots.

Except that English is wrong. The riots have nothing to do with Irish republicans. And politics in the north is only as “complicated” as any other land mass. Because once you understand that politics in the six-county statelet boils down to the fact that neither loyalist nor unionist wants ‘Roman Catholics about the place’, it becomes a whole lot simpler. And independent media must be ruthless in exposing that.

“They don’t want a taig about the place”

The Social Democratic and Labour Party’s (SDLP) Alasdair McDonnell caused a stir in 2015 when he was apparently heard saying:

The DUP don’t want partnership – they don’t want a taig about the place. I’m sorry, it’s as brutal as that.

But these weren’t really McDonnell’s own words. Because as a member of the SDLP, McDonnell is a ‘taig’ (tayg is a racist term for an Irish Catholic). He was merely paraphrasing the words of Ulster Unionist Sir Basil Brooke. In 1933 Brooke apparently boasted to an audience that:

he had not a Roman Catholic about his own place

Because he apparently believed Roman Catholics were:

And Brooke’s mentality played a significant part in the makeup of ‘Northern Ireland’ since partition in 1922. Because that unionist statelet used gerrymandering to limit republican participation in democracy and to discriminate against them in housing and employment. So it’s the erosion of that mentality, since Irish republicans took a stand against it, which causes unionists and loyalists such angst today.

Because today, republicans are elected to office, even though election to that office is far from what Irish republicans ever stood for. Nonetheless, unionist and loyalists can’t stand it. Republicans no longer live in squalor or accept second rate jobs. Well, no more than anybody else does at least.

But, but… isn’t it complicated?!

There’s plenty of terminology to bandy about for those who like to complicate things. But really it’s lots of different words for two pretty simple sides of the argument. Some will disagree, but I tend to categorise as follows (not an exhaustive list):

I’m clear about which ones I chose, and I have my reasons, but ultimately they’re just words. English’s “complicated” article on the other hand is significant. Because it’s insulting. It’s insulting as it’s effectively telling the reader they’re too ignorant to work this out. It’s too complex for mere mortals, so stay away.

The exact reasoning behind this latest spate of loyalist rioting may be complicated. But this current period of unrest reveals an uncomplicated big picture – on the 23rd anniversary of the Good Friday Agreement (GFA) and after almost a century of partition – of British unionist repulsion at power sharing with Irish republicans.

Of course, if we want to get into the nitty-gritty of the Northern Ireland Protocol in terms of what it says about import quantities and documentation, then yes, it’s complicated. But so are most other international treaties. The north’s no different. Yet I seriously doubt any young loyalist who petrol bombed that bus did so because they were fed up completing colour-coded importation documents in triplicate and returning them to Brussels within 3-5 working days. Maybe it’s more to do with the DUP winning the Brexit vote but losing the Brexit result.

And it’s not just the north

It’s probably safe to assume that almost every land mass on the planet has “complicated” processes and politics. I mean, look at the UK. The UK prides itself on law and order yet it doesn’t have a single written constitution. It allows unelected people, in its upper house of parliament, to decide British laws.

Its duke of Edinburgh came from Greece, lived in London and had no say over what happened in Edinburgh. Maybe because the UK has enveloped itself in so many complexities, it assumes everywhere else is the same. Should we also avoid UK politics?

McAliskey believes social inequality was at the core of the conflict in the north of Ireland. And that social inequality remains today. McAliskey claims there are 370,000 people in the north (in a total population of around 1.9m people) living below the poverty line. So the underlying problem is still there. And anyway, the GFA has been problematic since the get-go.

While it set out a model for power-sharing between Irish republicans and British unionists, those power-sharing institutions have collapsed several times. And they’ve essentially collapsed because unionists hate sharing power with republicans. Just as they hated the 1973 Sunningdale power sharing arrangement or even the Anglo-Irish Agreement in 1985.

So whether it’s Sunningdale, the GFA or the Northern Ireland Protocol, it matters little to British unionists. They can’t tolerate sharing power with Irish republicans. And that might very well be the reason why young, working class loyalists are doing the dirty work of older, middle class unionists. It’s that simple.

The more complicated media outlets make the north sound, the more this suits the unionist agenda. We must keep calling it out.