With its new leader, the DUP seems set on self-destruction - Canary 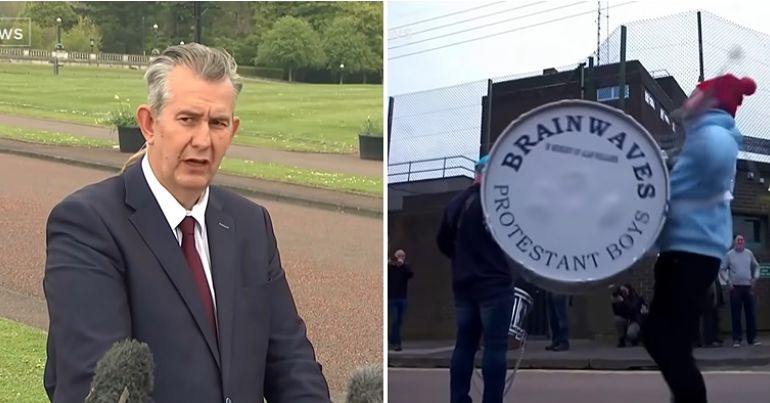 The newly elected Democratic Unionist Party (DUP) leader Edwin Poots has said the removal of the Northern Ireland Protocol (NIP) will be his number one priority. The fact his priority is at odds with the DUP’s government partners Sinn Féin doesn’t appear to matter. Nor the fact that it’s also at odds with two of the other five political parties in the Northern Ireland Executive.

Both the Social Democratic and Labour Party (SDLP) and the Alliance Party want the protocol to work. But I guess ‘democratic’ means different things to different people, given this debate has taken place several times over the last five plus years.

So as we approach the north’s contentious marching season, the DUP’s creationist leader-to-be presents a ‘new’ hardline policy. A policy that could see the 2021 marching season as the most violent in some time.

And since marching season is typically marred by some kind of violence, this may not worry the DUP faithful too much. But what should be worrying Poots’ believers is that the DUP’s 50th birthday celebrations could be the beginning of its own post-mortem.

The DUP’s roots are in “hardline Protestantism”. A similar hardline brand that used gerrymandering to prevent Irish republicans participating in democracy. It also discriminated against republicans in housing and employment. Indeed, the Northern Ireland statelet’s discriminatory pro-unionist/anti-republican behaviour since its foundation in 1922 was a catalyst for the north’s bloody 30-year conflict which caused:

just under 3,500 deaths and 48,000 injuries, the equivalent by population size of 125,000 deaths and nearly 2 million injuries in Britain, or roughly half the British death toll during WWII.

On the wrong side of public opinion

Just as it opposed several agreements beforehand, the DUP opposed the 1998 Good Friday Agreement (GFA). And it opposed it because it refused to share power with Sinn Féin. But, as announced this day 23 years ago, voters in the north overwhelmingly accepted the GFA. And 23 years on, the GFA forms the basis of the current power-sharing agreement, which the DUP is still a part of.

Similarly, when it backed Leave during the 2016 Brexit referendum, the DUP was out of step with the majority of voters in the north. And despite being on the winning side of that vote in the wider UK, it’s still unhappy with the result. Worse still from a DUP point of view, popular opinion indicates an increase in support for a United Ireland as a result of Brexit.

When the Northern Ireland Executive collapsed in January 2017, it further created shaky ground for the DUP. The collapse came from the DUP’s Arlene Foster refusing to step aside as first minister pending an investigation into the Renewable Heat Incentive (RHI) financial scandal.

Foster’s refusal forced Sinn Féin’s Martin McGuinness to resign as deputy first minister. The elections that followed led to Sinn Féin closing the gap on the DUP in the north’s Assembly.

Attempts to restore it in 2018 appeared to collapse when the DUP got cold feet on committing to an Irish language Act. This act would have protected the development of the Irish language.

Then, on 22 May, a LucidTalk poll predicted Sinn Féin would win the next Assembly elections. This would mean Sinn Féin, or any other Irish republican party for that matter, holding the first minister position for the first time in the north’s history. And while that would clearly be a democratic decision, it seems the DUP may not accept that either.

All of this is happening as we approach the summer. Followers of politics in the north will know that means marching season. A season when the unionist Orange Order marches through towns and cities in the north. A number of these marches lead to violence and intimidation of local Catholics.

And as the reality of the post-Brexit NIP dawns, the sinister face of unionism re-emerges. In what can only be described as a bizarre appearance at a Northern Ireland select committee, a representative of loyalist paramilitaries threatened a return to violence should the NIP remain in place.

And while this is in keeping with the loyalists’ March announcement to withdraw from the GFA, it sets a dark tone for the summer ahead. Because just as increased loyalist violence followed Belfast City Council’s controversial vote to limit the flying of the union flag in December 2012, the same could happen this year too.

A failed and dangerous strategy

So with this in mind, Poots’ hardline position makes little sense. Not least because there doesn’t appear to be a workable alternative to the NIP. But also because the DUP’s priority is to:

Yet the hardline position has had the opposite effect. If the DUP wishes to self-destruct then so be it. Not too many this side of the political divide will mourn that. But if it faced up to the north’s weakening position within the UK, then that could prevent us mourning something much more serious. It’s time the DUP woke up to that.