Labour claims the Good Friday Agreement as its ‘proudest achievement’. But it's failed to deliver for Northern Ireland. - Canary 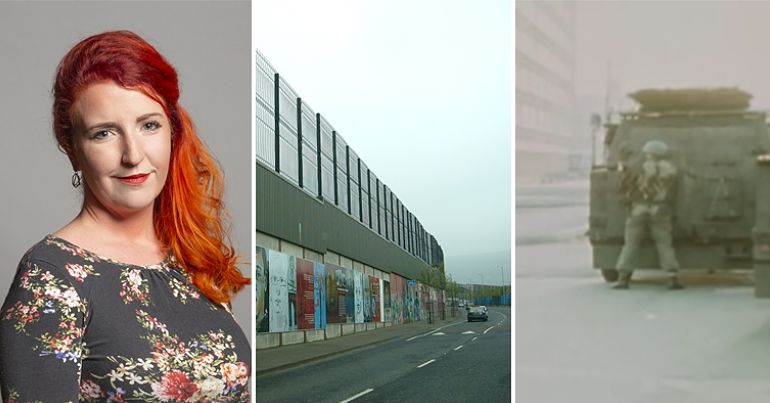 On 21 January, shadow secretary of state for Northern Ireland Louise Haigh, began Labour’s online education programme on the 1998 Good Friday Agreement (GFA). Haigh claims the GFA was one of Labour’s “proudest achievements”. In fact, she claims it was:

one of the most progressive political acts of the last century, bringing peace and power sharing after years of conflict and stalemate

The GFA marked the end of the 30-year conflict between Irish republicans and British crown forces. But in this first of four webinars, Haigh ignored that almost 23 years later, the GFA has failed to achieve much of what it promised. Furthermore, her “new education programme” ignores how the British state aggravated and led that conflict.

British role in the conflict

The first sign this webinar was going to take a revisionist look at the conflict was Tonge’s opening slide called “the pathway to peace”. Because it began with the 1973 Sunningdale agreement. Sunningdale was an attempt at power-sharing in the north which collapsed after five months following British loyalist opposition.

Tonge’s timeline completely omits republican concerns and the reason for the conflict in the first place. Republican paramilitaries – as they’d wanted since the war of independence – were fighting for a united Ireland. It ignores that the 30-year conflict was in part born out of the repression of peaceful protests beginning in 1968. These protests attempted to put the spotlight on injustices suffered by the Catholic and republican communities. But instead of addressing their concerns, they were violently attacked by British loyalists and members of the British police force.

His chosen timeline omits the British government’s policy of internment in August 1971. This policy targeted the republican community and, largely speaking, left loyalists untouched. It also omits the shooting dead of 14 innocent protesters by the British army in Derry’s Bogside on 30 January 1972. They were protesting internment. All of these took place place before Tonge’s timeline.

In an interview with the Irish News on 11 January, Haigh claims she was attracted to the Labour Party by Mo Mowlam. Mowlam was secretary of state for Northern Ireland when the political parties agreed the GFA.

She believes had Mowlam stayed in the position:

So, that could been seen as an acknowledgement that so much of the GFA remains unfulfilled.

But Labour’s track record in the north doesn’t exactly inspire. It was Labour’s home secretary James Callaghan who gave permission for British troops to be sent back to the north in 1969. Former secretary of state for Northern Ireland Merlyn Rees lifted the prescription against the terrorist Ulster Volunteer Force (UVF) in 1974 before the bombings of Dublin and Monaghan. Rees also attempted to criminalise the conflict by beginning the process of removing political status from paramilitary prisoners. This would later become the basis on which the 1981 republican hunger strikes were fought.

While people on the island of Ireland endorsed the GFA in two different referenda on each side of the border, it has failed people in a number of key areas. Because peace is not just the absence of armed conflict. And the kind of peace the north has today demonstrates the GFA achieved little other than decommissioning republican guns.

Because while loyalist paramilitaries later decommissioned in 2009, members of the loyalist community claim such groups are still armed. More importantly, the British army is still present and fully armed.

Policing and the PSNI

The GFA recommended an independent commission to investigate policing in the north. In 1999, the Independent Commission on Policing for Northern Ireland examined the role of the notorious Royal Ulster Constabulary (RUC). People from republican communities had every reason not to trust the RUC. But instead of recommending the disbandment of the RUC, the commission recommended renaming it.

The RUC became known as the Police Service of Northern Ireland (PSNI) in November 2001. And while the PSNI may be one of the most accountable police forces in Europe, it doesn’t follow that the rebranding led to greater public confidence. Justice campaigners for past killings in the north believe their path to justice has been blocked by the PSNI.

As reported by The Canary, the continuing case of the Craigavon Two demonstrates the lack of accountability on matters of policing and security.

Let there be no doubt

In that same interview with the Irish News, Haigh claims relations with the DUP are better now Corbyn has gone. It’s an odd thing to say given Haigh’s love of the GFA and the DUP’s contempt for it. But like so much of that first webinar, it’s probably not to be taken too seriously.

The guns of war are broadly speaking silent, but the words continue to bombard us.