There’s been peace in Ireland for over 20 years. But some Irish republicans claim they have ‘unfinished business’ - Canary 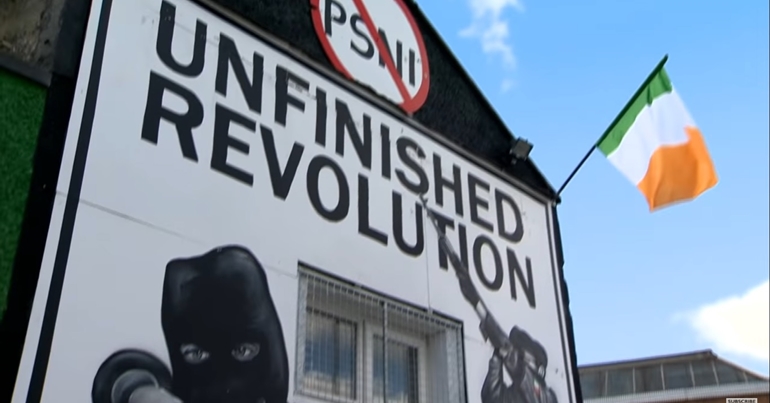 On 18 August, alleged members of the New IRA were arrested following an operation involving police forces on both sides of the border in Ireland. The operation, code named ‘Operation Arbacia’, also involved MI5 and revealed the New IRA was allegedly potentially planning “acts of mayhem”.

Operation Arbacia has dealt a significant blow to the New IRA and radical left-wing republican group Saoradh. But it also asks questions of the so-called peace in place for over 20 years. A delicate peace which an executive, established after the 1998 peace agreement, has tried to administer ever since.

The 1998 Good Friday Agreement (GFA) was overwhelmingly accepted through referenda on both sides of the border in Ireland. But at the time of those referenda, radical Irish republicans in opposition to Sinn Féin campaigned for a ‘No’ vote because the GFA still recognised British rule in Ireland. And while their voice was very much in the minority, they remain opposed to the GFA and all agreements that recognise British rule in the north of Ireland.

But they weren’t the only ones in opposition. The complexity of power sharing in the north means the DUP, which shares power in that executive with Sinn Féin, has not fully accepted the GFA either. Yet the GFA still remains the cornerstone of power-sharing and peace.

It would, however, be wrong to say there’s been peace ever since 1998. There hasn’t. Loyalist terror groups have launched sectarian attacks against Catholics. Radical republicans have attacked the British presence in the north a number of times. Republican paramilitaries shot two British soldiers dead at Massereene barracks in March 2009. Then later that month a separate republican group shot and killed PSNI constable Stephen Carroll. At that point, Sinn Féin finally drew a line between it and its former colleagues. Martin McGuinness labelled the radical republicans “traitors”.

For a number of radical republicans, McGuinness’ comment went too far. There could be no meeting of minds after that. For others though, that moment had already passed. Those who managed to live with the GFA, simply couldn’t tolerate Sinn Féin’s 2007 endorsement of British policing in the north. A police force that radical republicans believe singles them out.

Saoradh claims its members are stopped and searched by the PSNI at its party events. And even at the time of the murder of journalist Lyra McKee, Saoradh claimed the riots taking place at the time of her killing were as a result of:

the heavy presence of the PSNI, flooding into Derry at seven o’clock in the evening, into parts of the Creggan.

The comment appalled McKee’s partner Sara Canning. As The Canary reported, McKee was a journalist covering the riots at the time of her killing.

Since the formation of Saoradh, both the British and 26 County administrations in Ireland have directed an onslaught of harassment towards party members and supporters. This has culminated in another combined Crown Forces and British Military Intelligence raid on our party headquarters and other offices. It is clear that our party offices, our party members and our support base are being actively targeted in a futile attempt to remove Saoradh from communities in which we are visibly active. These Crown Forces activities, which follow encouragement most notably from Sinn Féin, the DUP and Alliance, will ultimately fail.

What is also noteworthy is the unbroken silence from certain other organisations at the State directed terror campaign against Saoradh members and their families. Certain Republican organisations, those who purport to be left wing, trade unions and human rights organisations that are usually and rightly so vocal regarding State repression in far off lands are strangely silent when similar oppression is inflicted at home.

But appalled as people are, the situation doesn’t appear to be changing.

The Canary asked McGlinchey if radicals believe the armed struggle is still the way to achieve a united Irish socialist republic:

the so-called ‘dissident’ [radical] republican base is actually a wide spectrum of organisations and independents who hold a variety of views on a current armed campaign, from outright support to outright rejection.

The organisations who continue to support an armed campaign see their actions as simply the latest in the long tradition of armed republicanism. They reject that their campaign is anything new and stress that there is a line of continuity back to the campaign of the Provisional IRA [PIRA] and even further back to previous campaigns.

In contrast, radical republicans have strongly asserted that altered conditions within the Northern Ireland state do not impact upon the republican campaign for sovereignty and emphasise that the IRA campaign was never fought for anything less than sovereignty. Radical republicans who continue to advocate an armed campaign have argued that the PIRA campaign did not fail, rather the leadership failed. When we understand this then we can understand why they may feel they could succeed where the Provisional IRA didn’t, even at the height of its campaign.

A chance for lasting peace

In an interview with the Irish News, McGlinchey said radical republicans:

Speaking to The Canary, McGlinchey added:

A key message coming from the base is that as long as there is partition and a British presence in Ireland then there will be those who will resist that. Another aspect to my assertion that they will remain a permanent feature of the Irish political landscape, concerns speculation that they will go away. I was making the point that the opponents of radical republicanism cannot wish them away.

So peace in Ireland is an uneasy one to say the very least. And there doesn’t appear to be a complete resolution just yet. Until such time as there is, there may well always be groups who engage in “acts of mayhem”.