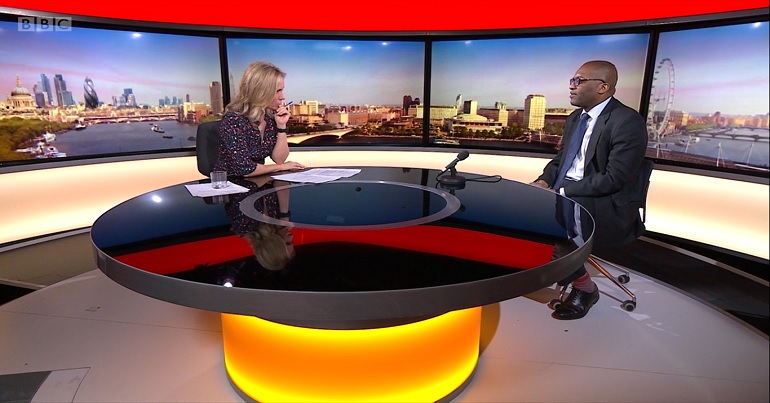 On Sunday 6 February, business secretary Kwasi Kwarteng appeared on the BBC‘s Sunday Morning. Predictably, he was asked about Johnson’s leadership and its “descent into chaos”. Kwarteng was also asked about the national insurance hike. As reported by The Canary on 28 January, both the Tories and the BBC have attempted to whitewash how severe this hike would be.

In response to a question from presenter Sophie Rathworth on the national insurance hike, Kwarteng said:

Look, I think the national insurance issue has been settled. We’ve identified the fact that there’s a huge backlog in the NHS, there’s a huge looming issue of social care and this is one way which we can actually foot that huge bill. There was a debate in cabinet but I think the prime minister and chancellor have been clear that the national insurance rise is something which is painful but necessary

But Kwarteng’s “painful but necessary” comment angered some people online. Especially as neither he nor his government colleagues would be feeling that pain:

Painful but necessary. @KwasiKwarteng You are prepared to let people go hungry and cold while you enjoy a £3,500 heating allowance, over & above salary. £81,932 + Minister's supplement £67,505. That is immoral.

If it’s going to be “painful but necessary” then suggest we all should share that burden equally by disallowing MPs from claiming heating allowances for homes or…ahem..stables via MPs expenses

To make matters worse, neither Kwarteng nor Rathworth mentioned the fact that money saved by withdrawing from the EU was supposed to pay for improvements to the NHS. So there should be no need for such ‘pain’.

Filmmaker Peter Stefanovic was among those who reacted to Kwarteng’s national insurance claims. Stefanovic said “Johnson’s government has just hiked taxes to their highest level in 70 years”. He also reminded us of Johnson’s 2019 promise not to raise taxes or national insurance. Again, this was something which Rathworth failed to point out:

Interviewer fails to point out Boris Johnson promised it would be funded by a massive Brexit dividend if we voted to leave the EU pic.twitter.com/eWG895Dr22

Not the only Brexit lie

And this wasn’t the only Brexit skeleton in the cupboard to come back and haunt the Tories. BBC Scotland‘s Sunday Morning presenter Michael Geissler actually did take a Tory to task. This time it was energy minister Greg Hands MP. They were discussing the rising cost of living in the UK, relative to other European countries. Geissler reminded Hands of a 2016 Brexit referendum pledge from Michael Gove. During that campaign, Gove said leaving the EU would mean the government could cut VAT on household fuel bills:

Martin Geissler – Michael Gove promised, in 2016, that if we voted to leave the EU VAT on domestic fuel bills would be scrapped.. where's that gone?

Martin Geissler – Why did he promise that then? #SundayMorning #Phillips pic.twitter.com/wu8icvTweZ

France and Germany have already taken steps to cut or slow the rise of household energy bills. But Hands claimed the UK still “compares favourably with the average of European countries”. This is despite some reports that prices in France have only risen by 4% compared to the UK’s eye-watering 54%:

#Phillips – In France energy prices have risen by 4% & it's 54% in the UK… what have the French got that we don't have, except maybe a better government?

Meanwhile Kwarteng continued to deflect the rising prices as a “global challenge”:

SkyNews: RT @RidgeOnSunday: .@TrevorPTweets: Where's the missing £850 per household going to come from?

Business Secretary @KwasiKwarteng says energy prices are a global challenge and the price cap will help with bills.#Phillips: … pic.twitter.com/DzPUPIIetW

Although Labour MP Bill Esterson reminded Kwarteng that the price increases are more a result of the choices Tories make than a “global challenge”:

Kwasi Kwarteng says the increase in energy bills is a global problem. In Britain, bills are going up £700, which is 54%. In France the government has intervened so bills are only going up 4%. The 50% difference in response is a British Conservative choice #notlevellingup

Choices such as spending £1.4bn on “a fantasy military space initiative” while people can’t afford heating would be among them.

In decline for the wrong reasons

The BBC, on its flagship Sunday Morning politics show, had the perfect opportunity to call out Tory lies and take a stand for people bearing the brunt of these prices increases. Instead it ignored the opportunity, something that we’ve become all too familiar with on Sunday mornings.

Independent media, on the other hand, will continue to call out the Tories’ bullshit. And it’ll do so long after partygate becomes painful old news.