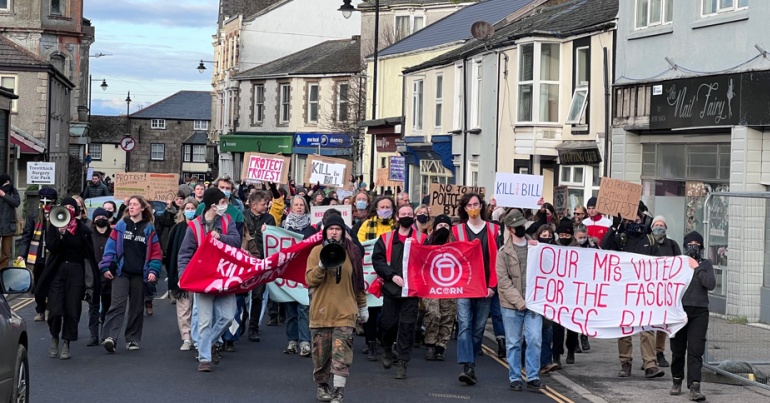 On 28 February, the Police, Crime, Sentencing and Courts Bill will return to the House of Commons. The bill suffered a series of defeats in the lords. But those defeats were never going to be enough to kill the bill. And indications from the Home Office now confirm that home secretary Priti Patel will try and reinstate some of the provisions dismissed in the upper house.

So it’s now time to take to the streets again and ramp up our protests against this racist and draconian piece of legislation.

As The Canary previously reported, it was always important not to get too excited about the defeats inflicted to the bill by the lords. Yes, the lords voted against amendments that would have introduced a raft of draconian protest offences, such as locking on. And these amendments, due to the fact they were introduced in the lords, cannot be re-added to the bill.

The lords also voted against the provision for criminalising protests that are too noisy. But as this was in the original bill, it can just be added back in. Now, according to the Guardian, ministers are to “continue fighting” for the protest powers.

Additionally, the lords didn’t amend the massive watering down of the threshold for prosecution for breaching conditions imposed on a protest. This key change in the wording of the 1986 Public Order Act means that a person commits an offence if they “ought to know” the conditions imposed by the police. In other words, you could be convicted of breaching a condition even if you didn’t know they’d been imposed. Currently, it has to be shown that a person knew the conditions were in force.

Many other protest provisions, such as ten-year sentences for damaging a statue or ten years in jail for actions that cause “serious annoyance”, were also left unchanged.

Even if all the protest amendments had been stripped from the bill, it would still be a racist and draconian piece of legislation. And it’s essential that we all remember that the bill isn’t just about protest.

As Eliza Egret previously wrote for The Canary in the wake of the lords defeats:

The bill will still criminalise the way of life for Gypsy, Roma and Traveller communities by making trespass with the intention to reside in or near a vehicle criminal offence. It will allow the police to arrest travellers, and/or confiscate their caravans or vans, which are literally their homes.

And as Egret points out, there’s a whole raft of other worrying proposals:

The bill will change the minimum age of receiving a life sentence in prison from 21 years old to 18 years old, locking up young offenders who are usually from the most working class and difficult backgrounds. On top of this, the bill will introduce secure schools, which the government describes as a “planned new form of youth custody”. Secure schools will, essentially, be prisons for children aged from 12 to 18 years of age, and they will be run by charities: yet more money being funnelled into the private sector.

When the bill was first introduced, it led to a wave of protests across the country, including the uprisings in Bristol. It’s time to ramp up that pressure again. We need to be noisy, disruptive, and seriously annoying. We need to be ungovernable.

We didn’t win our rights by asking nicely, and we’re certainly not going to keep them unless we make a hell of a fuss. The time for action is now. See you on the streets!