Here's a round-up of the strikes happening nationwide - Canary 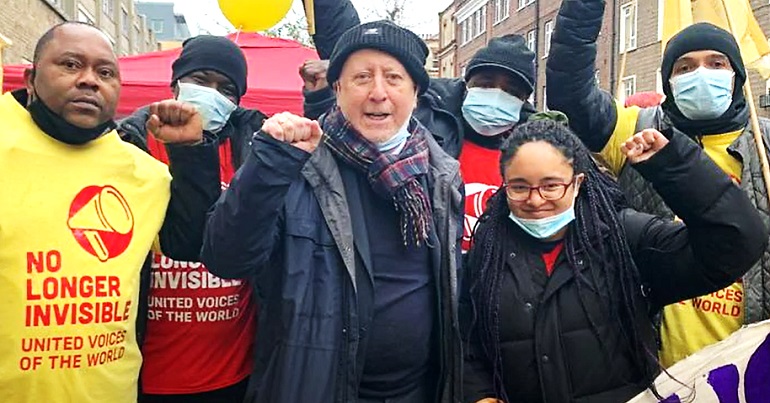 Amid the cost of living crisis, workers up and down the UK are fighting back. Various strikes are taking place. And one left-wing party has provided a round up of them.

Of course, the party showing support for all these strikes isn’t Labour; that would be too much to ask. Instead, it’s the Breakthrough Party, and on 23 February it tweeted a useful thread that detailed several current strikes:

Now they are fighting back & you just love to see it ❤️

Here’s a short 🧵 of all the strike action going on right now!

No sick pay for RMT workers

First up, and rail cleaners have walked out over pay conditions. Members of the RMT union are fighting for £15 an hour. Currently, bosses pay these workers either the minimum or real living wage. But as the RMT said, rising inflation means that for these people to avoid a real-terms pay cut:

Meanwhile, their employer Churchill made a nice profit last year and paid its directors a £3.8m dividend. Despite this, it can’t even be bothered to pay its cleaners sick pay. So, the workers have downed tools:

University staff across the UK are also striking. They’ve walked out over pay, pensions, and working conditions. Since 2009, the University and College Union (UCU) says bosses have cut staff pay by 25% in real terms due to “below inflation pay offers”. On Tuesday 22 February, bosses confirmed that staff would also see at least a 35% cut to their pensions. The UCU strike has seen over 50,000 staff at 68 unis walk out:

To top this off, the UCU is balloting staff over strike action at Staffordshire university. It’s over what the union calls bosses making a “two-tier workforce”. The university will employ new staff on different contracts to existing ones which will place them on a worse pension scheme. Meanwhile, around 1,500 workers from a group of private girls schools are also striking. Again, this is over pensions. They’re part of the National Education Union (NEU):

Our members aren't interested in @GDST's latest attempt to cut their pensions and make them agree a lesser pension. Picket lines strong and hundreds expected in Parliament Square at 1pm. #23together pic.twitter.com/k6HcjBM4l8

What a load of rubbish

Over in Coventry, refuse workers have been on a long-running strike. Again, it’s over pay. Labour-run Coventry council pays its refuse workers less than the going rate, and the council also makes staff work over 50 hours a week. The strike has been a damning example of how the Labour Party operates.

SKWAWKBOX said the council was a “scab“. It reported on Trade Union and Socialist Coalition (TUSC) candidate in the Birmingham Erdington by-election Dave Nellist. He spoke to Not The Andrew Marr Show about the strike, and accused Coventry council of spending £3m to try and break the strike:

Meanwhile, Unite has threatened to pull funding from Labour over its council’s actions. Keir Starmer simply sneered at the Coventry strike and Labour’s part in it.

Great Ormond Street is a world-famous children’s hospital, but bosses are giving outsourced security staff an unhealthy deal. United Voices of the World (UVW) union has been supporting them. It says the staff:

are denied the same annual leave, sick leave, and career progression as other NHS workers.

UVW calls this a “two-tier system“. But bosses are battering the striking workers. They got a court to place an injunction on the strike. This means staff could be fined or jailed for taking action outside the hospital. So, workers are holding a rally on Friday 25 February at 12pm. If you can, go and support them:

Bosses not delivering the goods

And finally, delivery couriers have been on a walk-out for over two months. The Independent Workers of Great Britain (IWGB) union has been supporting them. It involves people who work for Stuart Delivery, a subsidiary of DPD, that provides couriers for JustEat. In December 2021, it cut workers’ pay – slashing their delivery rates by 24%. This means couriers get a minimum of £3.40 per delivery, down from £4.50.

As IWGB said, for the bosses it’s different:

in 2020, Stuart’s highest earning director received a 1000 percent pay rise over the previous year to over £2 million

You can send an email to Stuart Delivery bosses here to show your solidarity with the workers.

General strike: everybody out?

With so many strikes happening up and down the country, and the cost of living crisis spiralling, it is time for collective action. As a minimum, more trade unions should organise actions. If they won’t, then workers should organise wild cat strikes. Moreover, surely the time for a general strike from all workers and unions is now: demanding as a minimum an end to government cuts and a national living wage of £15. Nothing less will do.