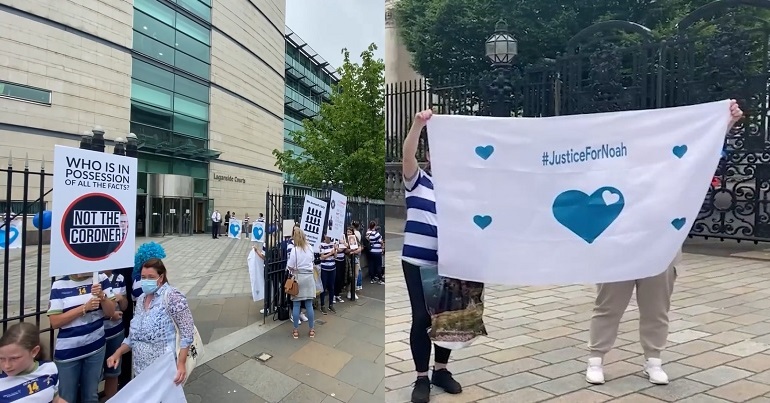 As reported by The Canary, 14-year-old Noah Donohoe disappeared on 21 June 2020. His body was found in a storm drain six days later.

The protest is to demand the chief constable releases files into Noah’s case. Justice campaigners believe these files are:

vital for us to get the truth we desperately need, to find out what really happened…

Campaigners have been forced to take action because the police are applying for a Public Interest Immunity (PII) certificate in relation to some of the files related to Noah’s death.

A post-mortem examination found Noah died as a result of drowning, and his mother Fiona Donohoe suspects foul play. While the police do not suspect this, a preliminary inquest last year heard the PSNI received several reports that Noah had been assaulted on the day he disappeared.

Fiona also believes the police are not doing everything possible to investigate the case. She said:

I as Noah’s mummy have, from the very start of Noah being missing, believed that the police did not use all their resources in finding Noah. This was confirmed when it emerged they had not paid anyone overtime while investigating his death. They did little, if any, forensics and any suspects that were brought to their attention were dismissed as not relevant.

Still waiting on a full inquest

Now, more than 20 months later – and despite the plan to hold it on 10 January 2022 – a full inquest into Noah’s death has still not happened. A Coroner’s Service spokesperson told The Canary:

An inquest date has not yet been confirmed but preparatory work is continuing, including in relation to identifying a suitable date and venue.

In November last year, barrister Brenda Campbell, representing Noah’s mother Fiona, said she needed more time to consider three expert reports and to review the findings into the police’s original investigation. Campbell questioned the quality of the material coming from the police, saying it’s a “constant source of concern” because some of the information is either illegible or the photocopying is poor. She said:

I would press to the court again that if we could have material in a legible format it would take a lot of heat out of the disclosure process.

What is causing most concern at the moment is the issue of the sensitive material.

That’s because the police are applying for a Public Interest Immunity (PII) certificate.

Some refer to a PII as a “gagging order“. If the police get this certificate, which could legally be challenged, it would mean some of this case’s “sensitive material” would be censored. A legal professional in the north of Ireland told The Canary his firm’s only dealings with PIIs was in terrorism cases. He said:

that’s why it’s so strange that this is being invoked here. It’s really really obscure

And while he added that a PII can be invoked in non-terrorism cases, it would have to be “pretty extenuating circumstances to get it justified”. The Coroner’s Office told The Canary:

As you may be aware, various matters (including in relation to sensitive information), have been addressed during the preliminary hearings, most recently on 8 February 2022.

Fiona Donohoe has also complained to the Police Ombudsman about the police’s handling of this case.

The campaign for transparency

Sinn Féin MP for West Belfast Paul Maskey has written to the British government and the head of police to raise his concerns about the application for a PII:

Today I met & gave my support to Fiona Donohoe.

I have written to the British Secretary of State & PSNI Chief Constable, to raise serious concerns on the PSNI applying for a Public Interest Immunity certificate to withhold evidence.

Additionally, Noah’s justice campaign team has started a petition calling for the release of these vital files. At the time of publication, it had around 280,000 signatures. The page reads:

My son, Noah Donohoe was an intelligent smart gentle boy. He was 14 years old and he was my only child and my everything.

I believe that someone harmed my Noah and that there have been serious and repeated failings in the Police investigation of his death. I will never get Justice for Noah if I do not get all the information. These four files are vital for us to get the truth we desperately need, to find out what really happened to my precious son.

I am asking you as the public, some of you as parents, to sign this petition so that Noah gets the justice he truly deserves and to place transparency and accountability where it should rightly be.