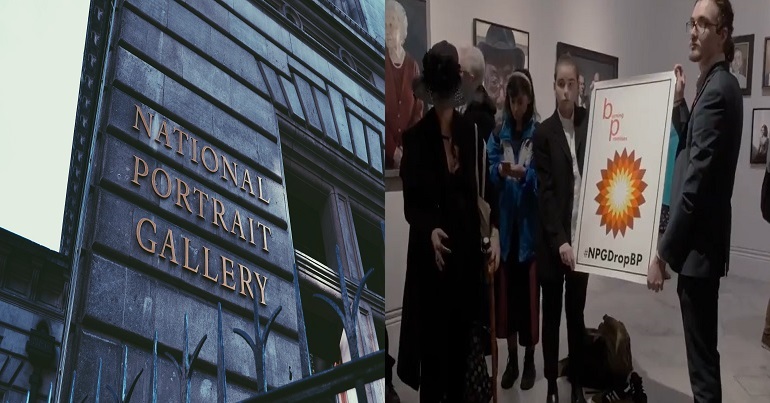 On 22 February, the National Portrait Gallery (NPG) announced its sponsorship with British Petroleum (BP) is at an end. The relationship with the multinational oil and gas company had lasted over 30 years. According to Culture Unstained, its termination is a result of “pressure from leading artists, campaigners and public”. The NPG said the:

partnership will not extend beyond December 2022, when their current contract comes to an end.

The Royal Shakespeare Company and the National Galleries of Scotland have already ended their relationship with the fossil fuel giant. This followed a threatened boycott from students and published scientific evidence on the dangers of the climate emergency.

The move is being hailed as a victory for years of direct action campaigning:

Fossil fuel research group Culture Unstained (CU) believes that the ending of this relationship is a result of “years of growing opposition to BP’s sponsorship of the Gallery”. The group feels the NPG announcement puts pressure on:

the British Museum to end its BP sponsorship deal after it was revealed just last week that the Director has already been seeking to renew the controversial partnership, and over 300 archaeologists came out in opposition to the renewal.

the tide is turning on the role of fossil fuels in public life.

This announcement is a moment for direct action campaigners to celebrate. It follows years of organising by activists against the involvement of a fossil fuel company with a cultural institution:

‘a truly national gallery for all’ cannot exist unless the promotion of a climate-changing company such as BP ends for good… https://t.co/yLJ5uoaPkL

In June 2019, artist Gary Hume wrote to the NPG demanding it end its relationship with BP. Hume wrote:

Either we distance ourselves from one of the world’s biggest fossil fuel producers and embrace the challenge of decarbonising, or we continue to give legitimacy to BP and its business activities that are seriously exacerbating the problem.

These direct action campaigns have severed the links between a fossil fuel giant and cultural institutions in the UK. But it’s not about saving cultural institutions from the scourge of fossil fuel companies. It’s about saving the planet. So several other organisations need to follow and divest from businesses that are slowly killing us and our planet.