Ukrainian president offers to arm anyone who will fight, as Russian assault continues - Canary 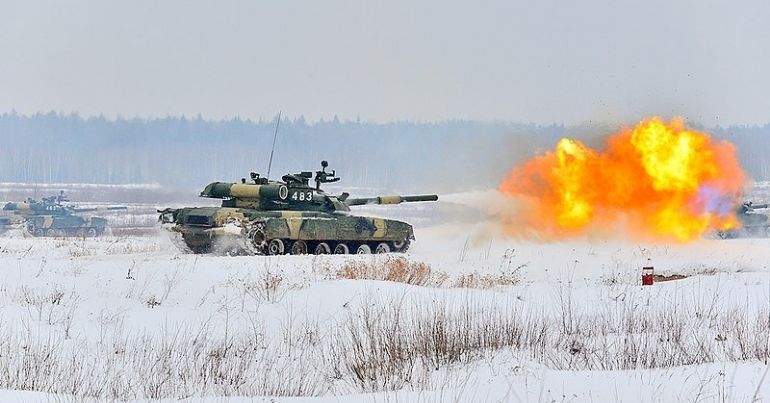 Citizens who want to fight Russia will be given weapons. That’s the promise of Ukrainian president Volodymyr Zelensky as the Russian assault on the country continues. Targets in Ukraine were hit early on Thursday. Months of posturing are now over.

Up to 50 people are reported dead, including civilians, as airstrikes hit targets inside Ukraine. Zelensky tweeted that sanctions would be lifted on all citizens, allowing anyone willing to defend the country by force to take part:

We will give weapons to anyone who wants to defend the country. Be ready to support Ukraine in the squares of our cities.

Russia’s vastly superior numbers are no secret. So, the idea of arming the population smacks of desperation. Western allies rallied to the Ukrainian cause. Among them Boris Johnson:

This is a catastrophe for our continent.

I will make an address to the nation this morning on the Russian invasion of Ukraine.

I will also speak to fellow G7 leaders and I am calling for an urgent meeting of all NATO leaders as soon as possible.

NATO chief Jens Stoltenberg also condemned the invasion, speaking of Russia’s “renewed aggression”. But while Russian ambitions have been the western focus, the alliance’s own expansion into Russia’s sphere of influence, which many critics cite as key context in the current situation, went unmentioned:

I strongly condemn #Russia’s reckless attack on #Ukraine, which puts at risk countless civilian lives. This is a grave breach of international law & a serious threat to Euro-Atlantic security. #NATO Allies will meet to address Russia’s renewed aggression. https://t.co/FPpyuzmUXD

Anti-war voices also made themselves heard. They included Labour MP Dawn Butler-Brent. She expressed solidarity with the Ukrainian people and with antiwar advocates. She also called for tough sanctions on British arms sales to Russia. The first layer of UK sanctions, aimed at only three individuals and five banks, were criticised as being weak:

Putin’s attack on Ukraine is unjustifiable and a breach of international law. The UK Government must immediately bring in tough sanctions on assets in the UK, and end military exports to Russia

Solidarity with the people of Ukraine and all those in Russia who want peace, not war

Amid reports Russian jets had been shot down, there were warnings about misinformation. One BBC fact-checker said a video circulating of Russian troops raising a flag in Ukraine was from 2014. And another of a jet coming down was actually from Libya in 2011.

This video does not show the shooting down of a "Russian fighter jet" in Ukraine. It is from 2011 when Libyan rebels shot down a government warplane bombing Benghazi. pic.twitter.com/jOp6X20gUd

And Ukrainians are also feeling the bite. With the country’s central bank placing limits on bank withdrawals, there are fears of economic turmoil.

US President Joe Biden promised his support. But as ground forces and air attacks rock Ukraine, a promise of more talks must appear impotent to many:

He asked me to call on the leaders of the world to speak out clearly against President Putin’s flagrant aggression, and to stand with the people of Ukraine.

But the overall financial impacts of the conflict began to show straight away. Russian stocks plunged as the fighting started. Al-Jazeera reported the Russian currency had hit an all-time low against the US dollar. The effects this will have domestically aren’t yet clear:

Russia's currency has plunged to an all-time low against the US dollar after Putin launched a full-scale invasion of Ukraine.

Confusion reigns in Ukraine. And in an age of misinformation, it is hard to get a picture of what is happening on the ground. Yet, it is clear is that Vladimir Putin feels confident enough to launch strikes within Ukraine. This could mean international rivals no longer view the US and its allies as seriously as before. And as the bombs land and the death tolls rise, Zelensky’s offer to arm the population could be both a deadly and desperate move.