Picking NATO over Russia, or vice versa, is a fool’s game. Choose people, not power. - Canary 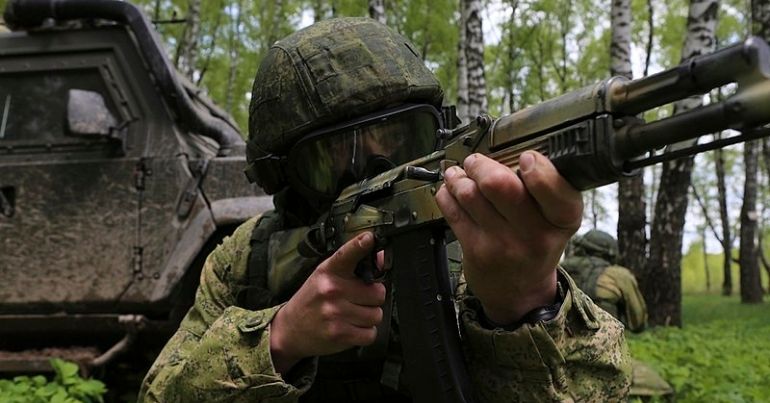 Less than 48 hours into Russia’s invasion of Ukraine, and so much remains unclear. Will Russia occupy? Will NATO respond militarily? What are the risks of nuclear escalation? But one thing should be very apparent. Looking to either NATO or Russia in search of a good guy in all of this is deeply naïve.

On the one side we have the Russian regime. Viciously illiberal and oligarchic, it’s a model of authoritarian capitalism. Determined to reclaim its lost imperial status, it’s as willing to bomb Ukrainian cities as it is to batter its own courageous anti-war protestors off the streets of Moscow.

Footage of anti-war protesters in St. Petersburg (via @fontanka_news). pic.twitter.com/BaraMOPJDH

In NATO, we have an organisation which today functions as a beard for US imperial ambitions. It comes with a bleak history of supporting fascists in Europe and of the kind of brinkmanship which has brought us to where we are today. It’s also played a direct part in the disastrous wars in – to name just two recent examples – Libya and Afghanistan.

Putin’s regime is no more anti-fascist than NATO is the FBPE movement with guns. They both just like to claim otherwise because it suits them.

There is little to admire or endorse in either party, even if both make claims which contain an atom of the truth. Has NATO aggressively pushed into the buffer zone Russia wanted after the end of the USSR? Have NATO countries helped arm and train actual, real-life fascists in Ukraine? Absolutely. Is the Russian regime grotesquely corrupt? Does it oppress LGBTQI+ people? Has it just invaded a sovereign nation? Yes, yes, and yes.

Then why the clamour to side with one over the other? Of course, part of it is effective propaganda. NATO, for example, is held up by many as a liberal institution which sustains peace. This is a line echoed by mainstream British politicians of all stripes. It’s a position which even notionally left-wing MPs invoke uncritically. Even the last Corbyn manifesto promised to fund NATO. I myself, however, have a NATO medal from the war in Afghanistan which tells a different story. A story of occupation, injustice and, ultimately, hubristic failure.

For some on the Russia-supporting side there is a nostalgia for an ‘anti-fascist’ and ‘anti-imperialist’ Russia which, if it ever did exist in this pure, unblemished form, it certainly does not today. The point being this nostalgia makes Putin’s claims of his invasion being about clearing out Nazis from Ukraine seem appealing and genuine. At least for some people. The Russia of 2022 is many things, but it’s certainly not the Russia which inhabits the mind of today’s Stalinists – even if that is your bag. From a purely humanist viewpoint, it definitely isn’t mine.

We need to move past the Cold and World War framings which are being applied to Ukraine. New Hitler’s, New Stalin’s, ‘appeasement’, and so on – this is a crass brand of politics, and it only benefits the powerful. We need to look at the world as it is, and support the people who are suffering in this war.

While Ukraine was being invaded, people across the political spectrum here in the UK were churning out any number of hot takes on Twitter. And that’s what Twitter is good for – pretending you have all the answers – something which should absolutely be avoided. The real questions we should be asking are where can practical forms of solidarity be given? And where is the resistance from below coming from?

We can’t make sense of the world running on Windows 1945, or Windows 1954. It’s long past time for some of us to update our software on Russia/NATO antagonism. And that doesn’t involve backing one over the other.

If not them, who?

While their crowdfunders and posts haven’t gained the same mass traction as some others, there are Ukrainians and Russians who are resisting both fascism and Russian militarism. The website CrimethInc has published the positions of some of these groups. Its article includes both Russian and Ukrainian perspectives.

Russian anarchists released a statement on the invasion which CrimethInc published:

Palaces, yachts, and prison sentences and torture for dissenting Russians are not enough for Putin’s imperial gang, they should be given war and the seizure of new territories. And so, “defenders of the fatherland” invade Ukraine, bombing residential areas. Huge sums are being invested in murder weapons while the people are impoverished more and more.

The Anarchist Black Cross Dresden group have also established a fundraiser to help those caught up between these two forces. It said:

You can help people to bring their relatives and friends in safety, support people who need to leave the country and establish a place to live, organize resistance to protect their neighborhoods, get needed goods and medical supply to survive. There are also a lot of people from other countries in the region like Belarus and Russia who seek in the last years refugee in Ukraine. With a Russian invasion they are threatened in Ukraine and are not safe anymore.

Neither NATO nor Putin

Partly, what we have seen in the last days are two sets of nostalgists relitigating old conflicts while Ukraine burns. This does nothing to help a population caught between two rapacious powers. There is a suggestion at times that because Ukraine – like Russia and, indeed, Britain – has fascists in it, the whole population is fascist and thus undeserving of solidarity. On the other side, there is considerable apologia for the bosses club that is NATO, and myth-peddling about its commitment to some liberal, ‘rules-based order.’

These are positions which cannot stand. They are no use to thinking people, because they are factually wrong and fundamentally immoral. On the left, we are meant to be engaged in the project of reason. We are meant to back people, not power. And the time to do so is now.