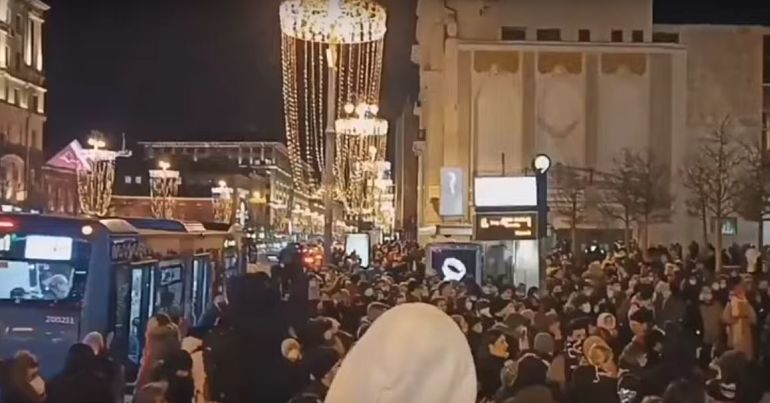 There have been mass protests in many Russian cities, with people demanding an end to the war against Ukraine. From Ukraine itself, people are being urged to take up arms. And there are several reports of cyber attacks against Russian targets.

On 24 February, journalist Alejandro Alvarez posted on Twitter videos of mass protests in cities across Russia. In his Twitter thread they included: St Petersburg, Moscow, Yekaterinburg, Novosibirsk, Nizhny Novgorod, Kaliningrad, and Volgograd. Those demonstrating could be heard shouting in Russian “No to war”:

Protests are erupting in several Russian cities tonight against Putin's large-scale invasion of Ukraine, along with attempts from police to forcibly suppress them. Here's his hometown of St. Petersburg. I'll be threading videos below as I find them. pic.twitter.com/B5MyG5E4ou

Many of the brave Russian protesters were arrested and under the notorious Russian prison system may face imprisonment, beatings or worse. Though they will no doubt inspire the people of Ukraine to stand fast in their opposition to Putin’s war.

Indeed, Ukrainian president Volodymyr Zelenskyy has urged the people of his country to rise up and take up arms against the invaders:

We will give weapons to anyone who wants to defend the country. Be ready to support Ukraine in the squares of our cities.

That follows authorisation by the Ukrainian parliament for volunteer groups and paramilitaries to use small arms and other weaponry.

We are arming people who will be taking that fight to the Russians in every way. We are a nation of 40 million people and we are not going to just stand idly by as Russia does as it wants all across its borders.

We will fight with everything we have and all the support the world can provide us.

There are also reports that hacktivists have temporarily taken down the website of Russia Today (RT):

The #Anonymous collective has taken down the website of the #Russian propaganda station RT News.

Other Russian sites reportedly brought down include the Duma (Russian parliament), the Russian Ministry of Defence, and the Kremlin. There’s also a claim that the website of the Russian energy giant Gazprom was taken down.

Moreover, on 26 February, ‘Anonymous Ukraine’ issued a warning to Putin and put out a call to other Anonymous hacktivists to step up the attacks:

Meanwhile, Amnesty International reports that Russia may be guilty of war crimes. Indiscriminate attacks by Russian forces have included hits on civilian areas as well as hospitals.

The Russian military has shown a blatant disregard for civilian lives by using ballistic missiles and other explosive weapons with wide area effects in densely populated areas. Some of these attacks may be war crimes.

One suggestion to how Putin’s war could end has come from former Greek finance minister Yanis Varoufakis:

The only issue today should be to stop the war and to secure the withdrawal of Russian troops from Ukraine. The only way that could happen is a Washington-Moscow agreement that Russia withdraws in exchange for a commitment of Ukrainian neutrality. Anything else is war mongering.

In the past, armed resistance groups made up of citizens around the world have supported the fight against authoritarianism. One example is the International Brigade in Spain in 1936-39.

Indeed, it’s now reported that Ukraine is setting up an “international” legion for foreign volunteers to join the Ukrainian army. Zelensky explained:

Every friend of Ukraine who wants to join Ukraine in defending the country please come over, we will give you weapons.

Though the details of how that would run are not clear. Nor how local democratically-organised militias would or would not fit in with this initiative. Also, the call out could easily attract the far-right from every corner of the globe. That is not an exaggeration, given the integration of ultra-nationalists such as the Azov Battalion into Ukraine’s military structure.

Another possible outcome is Russians deploying sheer people power to demand the end of the corrupt and autocratic Putin-led regime. But this would require protesters taking to the streets not in their thousands but in their millions – and in every city and town in Russia. In short, a real revolution – by the people, for the people.

Russia knows too well that Ukraine has a proud history of resisting totalitarianism. The Revolutionary Insurgent Army of Ukraine (RIAU) consisted of a 100,000 strong army, led by anarchist insurrectionist Nestor Makhno. The RIAU fought a campaign against the Bolsheviks in the aftermath of the Communist revolution. In defence of the libertarian communes and “free soviets”, its long-term goal was to form a stateless, anarcho-communist society. That goal was never achieved.

As for the current conflict, Putin’s invasion of Ukraine may ultimately prove to be his greatest mistake. For in recent days, the Russian people may have tapped into hope for a real revolution.