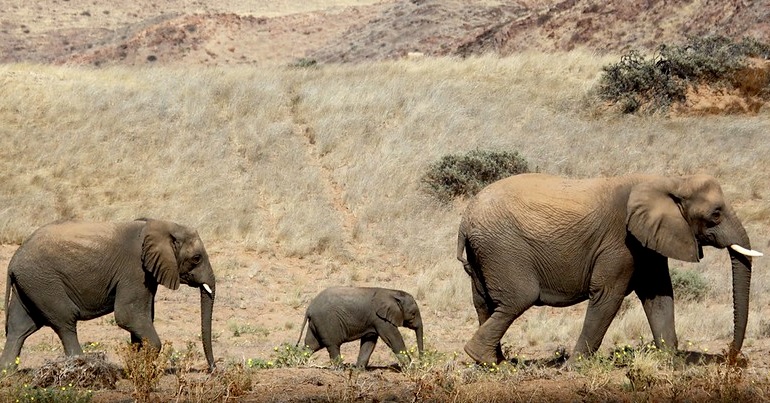 The Namibian government’s case for a controversial sale of wild elephants to destinations abroad is weakening by the day. Following the release of footage of captured elephants destined for export, concerns over their welfare have grown. Authorities have also faced condemnation over the detention of journalist John Grobler in connection to that footage. Meanwhile, the Pro Elephant Network (PREN) has sent an urgent letter to a range of related officials, raising new questions over the legitimacy of the trade.

Mired in controversy from the start

Namibia’s Ministry for Environment, Forestry, and Tourism (MEFT) first floated the idea of the elephant sell-off in 2020. Following this, more than 100,000 people signed a petition condemning the sale, Mongabay reported. Nonetheless, MEFT confirmed in August 2021 that it had successfully auctioned off 57 elephants, some of whom it would export abroad.

A statement from MEFT in February said that it has captured 37 elephants so far, with 15 already supplied to a Namibia-based bidder, where they’ll stay. It’s exporting the other 22. The department hasn’t revealed what their final destination will be, aside from claiming it’s not China. These elephants are currently in holding on a farm owned by the trophy hunting company GoHunt Safaris. MEFT said it supplied the elephants to the company’s owner Gerrie Odendaal as he was “one of the successful bidders” in the auction.

MEFT also stated that Namibia Wildlife Vets and African Wildlife Vets captured the elephants from the wild. The former company has translocated many wild animals from Namibia to reserves in the DRC in recent years, including a group of elephants in 2019.

The EMS Foundation, an organisation focused on vulnerable groups including wild animals, has said that PREN members received reliable intel in October that some of the captured elephants are destined for “captive locations” in the UAE. And it asserted that the information pointed to the involvement of a South African wildlife broker in the trade.

Investigative journalist Grobler captured drone footage of the elephants at the holding location:

#FreeTheNamibianElephants currently trapped in Gobabis in Namibia. We want a future in which all elephants can thrive in freedom and dignity in their protected natural habitats as part of a naturally functioning evolving ecosystem. pic.twitter.com/RMO9xaari6

#FreeTheNamibianElephants Deeply disturbing images of the wild elephants captured destined for zoos in the UAE. Our communications with authorities in Namibia since December 2020 met with SILENCE. Journalists arrested for these images. pic.twitter.com/f8139B06Ar

#Namibia 🇳🇦: journalist @JohnGrblr was detained for a few hours by the police on Saturday night for flying a drone over a farm where 22 elephants are being held for export to a zoo in Dubai. RSF firmly condemns this arrest and asks for the return of the material. pic.twitter.com/sdgvFAAHv6

The footage itself has also raised concerns. In an urgent letter addressed to numerous officials related to trade, PREN highlighted that there’s “little indication of shade or shelter” in the holding area. It said this raises “severe concerns” for the elephants’ welfare, particularly the two baby elephants there. Moreover, PREN highlighted that the young age of these calves suggests that MEFT captured the elephant group while some females were in their last trimester of pregnancy. This raises “welfare, safety and legal concerns”, it said.

A 2021 investigation raises further questions about whether MEFT has put the population of elephants they came from at risk by removing them. MEFT captured the elephants currently on Odendaal’s farm from the Kamanjab commercial farming in the Kunene region. PREN says this capture happened in October 2021. Ahead of this, an on-the-ground investigation by journalists Adam Cruise and Izzy Sasada took place. It found that the elephant population in the Kunene region could be “on the verge of collapse”, with barely any breeding bulls and high infant mortality.

Meanwhile, MEFT has repeatedly claimed that it chose the capture sites to mitigate conflict between elephants and humans. But the investigation found little evidence of significant conflict in the Kamanjab area, along with “low numbers of elephants”. It highlighted that an aerial survey in 2016 counted only 18 elephants in the area.

MEFT did not respond to request for comment regarding the situation.

The Convention on International Trade in Endangered Species of Wild Fauna and Flora (CITES) is the global body that determines the rules on international wildlife trade. It’s also supposed to enforce them. As The Canary has previously reported, a CITES rule change in 2019 regarding what constitutes an ‘appropriate and acceptable destination’ has, with a couple of exemptions, ruled out the export of elephants to places beyond their natural range, i.e. Africa.

But Namibia is relying on a contested interpretation of the rules governing the international trade to conduct its elephant sales. The EMS Foundation obtained a legal opinion in 2021 that concluded Namibia’s sale of the elephants to outside of Africa would be unlawful in this regard.

PREN’s urgent letter points to another potential violation. It names the Al Ain Zoo and the Sharjah Desert Park in the UAE as “potential” recipients of Namibia’s elephants. The former is a member of the European Association of Zoos and Aquaria (EAZA). PREN has approached a number of relevant EAZA entities on the situation, such as the EAZA Ex-situ Programme for African Elephant.

According to PREN, the EAZA entities said that while they’re not “principally against” importing from the wild in certain circumstances, those circumstances “do not apply at present”. As a result, they don’t currently support the import of wild elephants to EAZA zoos. And EAZA members have to abide by this position.

The CITES Standing Committee, which provides guidance to the CITES Secretariat, will meet in France in March. It’s expected to address concerns referred to it by the Animals Committee over Namibia’s contested interpretation of CITES’ rules.

The Standing Committee did not respond to questions from The Canary about whether it will address those concerns at the meeting. But with the multiple controversies surrounding Namibia’s planned export, the issue would be hard for the committee to ignore.