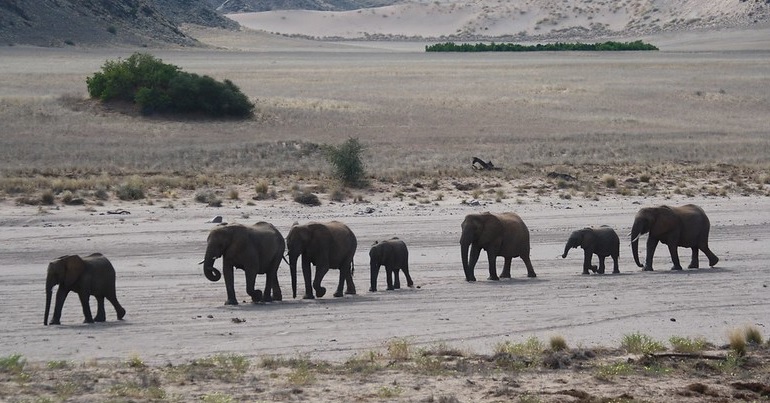 The global wildlife trading body has released a statement regarding Namibia’s scandalous firesale of endangered elephants. Experts and NGOs have condemned the response from the Secretariat of the Convention on International Trade in Endangered Species of Wild Fauna and Flora (CITES). They argue that it effectively rubber-stamps Namibia’s plan.

They’ve also pointed out that the body’s green light for the sell-off is problematic for numerous other reasons. This includes the fact that the trade could contravene CITES’ own rules, in more ways than one.

As The Canary previously reported, the Namibian government is trying to move ahead with the controversial sale of 57 elephants. It’s selling them at the low price of around £5k per animal. It originally planned to sell 170 elephants.

The Ministry of Environment, Forestry and Tourism (MEFT) claims the sell-off will “minimise human-elephant conflicts” in the areas from which it will capture the elephants. But an investigation by the NGO Fondation Franz Weber (FFW) found that such conflicts are minimal in most of the targeted areas.

The two-month-long investigation also revealed that Namibia’s plan could seriously harm some elephant populations’ prospects for survival. Adam Cruise, the environmental journalist who carried out the probe for FFW, wrote in his report on the situation:

these captures and exports are likely to endanger some of Namibia’s isolated elephant populations, in particular, the uniquely desert-adapted elephants from the arid Kunene region in the northwest of the country.

Namibia planned to capture half of the 170 elephants it initially intended to sell from the Kunene region. Cruise asserted that although Namibia was only able to sell 57 at auction, the “figure is still large enough to have serious negative effects on the viability of the desert-adapted elephant population”. He continued:

the removal of just a handful of elephants from the Kunene region could have severe consequences on an already fragile elephant population reeling from years of drought, trophy hunting and government mismanagement.

Namibia’s population of desert-adapted lions is in a similarly precarious situation due to drought, past trophy hunting and government mismanagement.

Of the 57 elephants, Namibia says that it’s exporting 42 of them outside of the country. CITES governs whether these sort of international trades can go ahead. It lists species in three appendices, essentially depending on how much at risk of extinction they are. It then sets out rules for trade of species in those different appendices.

CITES classes elephants in Namibia as an Appendix II species. And the body’s annotation for Namibia’s live elephant trading dictates that it can only sell them to “appropriate and acceptable destinations” and “in situ” conservation programmes. This means the country shouldn’t be able to export live elephants to anywhere outside their natural range.

However, Namibia previously unilaterally decreed some of the live elephants it wanted to trade as Appendix I. This move was based on its interpretation of an addendum to the CITES annotation. The addendum says that if Namibia doesn’t comply with the conditions listed in the annotation, the “specimen” in question should be upgraded to Appendix I.

Trade in Appendix I elephants is more restrictive in relation to things like their ivory, for example. Perversely, though, it isn’t in terms of where countries can ship live elephants off to. The ‘in situ’ restriction doesn’t apply to Appendix I elephants, although there are other conditions. That’s exactly why Namibia previously interpreted the addendum in this way, so it could sell elephants to Mexico and Cuba.

Namibia is using this same unilateral interpretation of the addendum for its current sell-off of elephants. FFW said it’s a ‘total misinterpretation’ of the rule. The NGO also highlighted that CITES’ own Standing Committee, which provides guidance to the Secretariat, plans to examine the legality of Namibia’s interpretation at its next meeting.

Meanwhile, the Pro Elephant Network (PREN) wrote an open letter to the CITES’ Secretariat on 21 September. It described Namibia’s interpretation as “wrong”. PREN argued that in guidance on annotations, CITES makes clear that the addendum only relates to specimens that are “not specifically included in the annotation”. It said that “live elephants are clearly specifically included in the annotation”, so the addendum shouldn’t apply to them.

Nonetheless, FFW argued, the CITES Secretariat ‘confirmed’ Namibia’s interpretation in its statement, effectively giving it the green light. The NGO’s director of international campaigns, Anna Zangger, said that in doing so the Secretariat, which is meant to oversee the work of the Convention, had “exceeded its authority”. In its letter, PREN also reminded the Secretariat that it “has an administrative and not a decision-making role”. The parties to CITES, namely nation states, are the decision-makers for the body.

In a response to The Canary, CITES said the purpose of its statement was to inform, give historical background, and describe its complex rules around African elephant trading. The Canary also contacted MEFT for comment. It had not respond by the time of publication.

Namibia’s sale of the elephants could additionally fall foul of CITES’ rules for both Appendix I and Appendix II species. Both sets of rules share one demand. The scientific authority of the exporting country must have advised that the trade “will not be detrimental to the survival of that species”.

As FFW’s investigation has shown, the capture and sale of desert-adapted elephants in the Kunene region may well be detrimental to the survival of their populations. Cruise confirmed this risk to The Canary, saying:

That there is a debate over the interpretation of the CITES regulations clouds the fact that the captures are taking place in the area of a rapidly dwindling and isolated population of uniquely desert-adapted elephants that will most likely collapse if these captures and exports go ahead.

Like the unique desert-adapted lions, these desert-adapted elephants aren’t considered a separate species. But they are rare and distinct from other African elephants, both physically and behaviourally.

As The Canary has extensively documented, CITES is a deeply flawed institution. It’s meant to ensure that trade doesn’t drive species to extinction. But example after example reveal it to be little more than a vehicle to facilitate the commodification of wild lives, often with dire consequences for species and their communities.

With the planet experiencing a sixth mass extinction, we need wildlife-focused institutions that embrace and promote limits to the use – and abuse – of the world’s diverse beings.

CITES’ actions, and those of its Secretariat, show it is not such an institution.