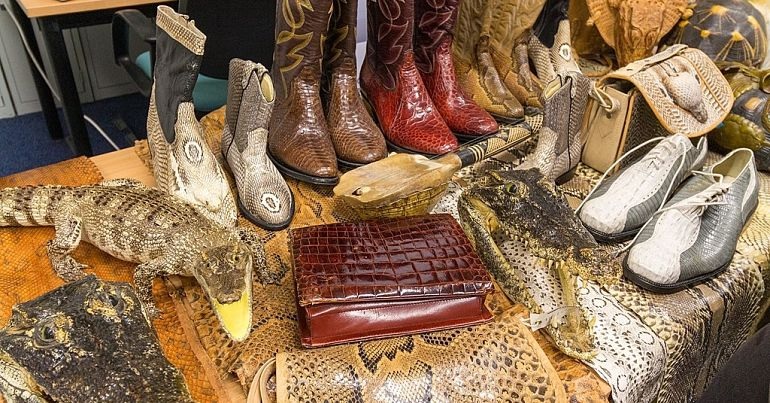 The biodiversity crisis, aka the rapid disappearance of essential diverse life on earth, is – alongside the climate crisis – one of the most pressing issues on the planet right now. The rich tapestry of life on earth is responsible for the ecosystems that humans, and all living beings, depend on for survival and health. But the world’s species are disappearing at an astonishing rate.

The causes of biodiversity decline are largely human-led, such as the climate crisis, pollution and destruction of wild spaces. An explosive new paper also shows that the wildlife trade, in all its forms, bears a huge responsibility for the crisis.

The findings raise serious questions about the adequacy of the current legal international wildlife trading system.

The wildlife trade is a huge industry which involves the commodification of wild species for food, medicine, fashion, luxury goods, entertainment, laboratory testing, the pet trade, hunting trophies and more. It involves both legal and illegal trading, and it happens at a local, national and international level. The legal trade is reportedly worth around $300bn a year. The EU’s legal wildlife trade alone, for example, amounts to €100bn annually.

The paper, which is the work of a team of international scientists from the University of Sheffield, Norwegian University of Life Sciences and the University of Florida, looked into the relationship between species declines and the wildlife trade. Specifically, they investigated the declines of 133 land-based species that were subject to trade. Their analysis included legal and illegal trading, at all aforementioned levels (local, national and international). The ‘trade purposes’ they focused on were the bushmeat trade, the pet trade, ivory, traditional medicine and laboratory use.

They found that traded species declined in abundance by a massive 62% on average. Trading at a national level reduced the abundance of species by 76.3%, while international trading decreased abundance by 65.8%. The study said local trading had “limited impacts”.

In terms of the trade purposes involved in declines, the study asserted that the bushmeat trade, excluding wild species that were consumed for subsistence, caused “significant declines” at 59.7%. The impact of the pet trade was particularly extreme, causing declines of 73%.

Most vulnerable, most hammered

Critically, the study found that:

That means that trade is most heavily depleting the species that are, according to the International Union for Conservation of Nature’s (IUCN) list of threatened species, already on the road to extinction. So the wildlife trade is ‘compounding’ their risk of annihilation.

A dearth of information

Furthermore, as the Guardian reported, the authors noted that there was a dearth of studies that contained “sufficiently rigorous data on population impacts” for the species in question. Lead researcher on the study, Oscar Morton, said they “reviewed thousands of published articles, in a huge comprehensive search of the available research”. However, they could only find a handful of studies from Asia – a “hotspot” for the wildlife trade – and barely anything on the US. They found no relevant studies from Europe either. Meanwhile, they said there was an absence of studies “on the impacts of trade for several highly traded taxonomic groups, including amphibians, lepidopterans, arachnids, orchids and cacti”.

Professor of Conservation Science at the University of Sheffield, David Edwards, commented:

Thousands of species are traded for pets, traditional medicines, and luxury foods, but how this impacts species’ abundances in the wild was unknown. Our research draws together high-quality field studies to reveal a shocking reduction in most traded species, driving many locally extinct. …

As a society, we urgently need to reflect upon our desire for exotic pets and the efficacy of legal frameworks designed to prevent species declines.

As Edwards indicated, there are international ‘legal frameworks’ for wildlife trade and biodiversity protection. The Convention on International Trade in Endangered Species of Wild Fauna and Flora (CITES) is the UN body that oversees the global wildlife trade, supposedly to ensure that it doesn’t threaten species’ survival. Meanwhile, the UN’s Convention on Biological Diversity (CBD) is the legal instrument that’s meant to “encourage actions” among its 196 signatory nations and that will “lead to a sustainable future”.

The Canary contacted CITES for comment but it didn’t respond by the time of publication.

Clearly, both bodies have catastrophically failed to fulfil their remits. Arguably, this is in no small part because of the faith these bodies, and most national and international powers, have put in the idea of ‘sustainable use’ as the solution to our ecological woes. Sustainable use means humans using biological diversity at a rate that ensures its continuation for further use. It is essentially the notion that the non-human natural world is best protected if it’s put to human use because then humans are motivated to conserve it.

As journalist Adam Cruise has pointed out, this is an anthropocentric approach to conserving wildlife that largely ignores “the interconnected relationship between humans and wild animals and their dependence on and in a broad ecological system”. It’s also an approach that’s dramatically failed to do what it says on the tin, as this explosive study illustrates.

Cruise argues that to conserve biodiversity, including ourselves, we need to “preserve the house that keeps us all alive – wild nature” rather than continuing on our current anthropocentric trajectory. In short, the sustainable way forward lies in not using wild species for our own immediate ends.

Featured image via The Wub / Wikimedia