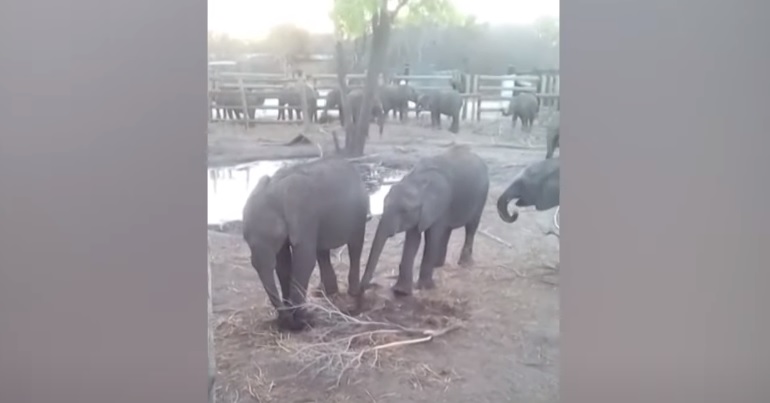 Zimbabwe loaded 32 baby elephants onto a China-bound plane in October 2019. It had sold off the young animals, who it had separated from their wild families a year earlier, to an unnatural and torturous life in zoos. Zimbabwe authorities went ahead with the baby elephants’ export in the face of legal action. It also did so just before the global wildlife watchdog, the Convention on International Trade in Endangered Species of Wild Fauna and Flora (CITES), implemented a landmark rule change that would have made the export impossible.

Zimbabwe, however, isn’t guaranteed to get off scot-free with its much criticised move. A recent CITES report accuses the country of not only contravening the “will” of CITES members, but the “good faith” and “spirit” of the Convention overall. It also asserts that, regardless of the landmark rule change that was about to come into force, Zimbabwe contravened prior provisions of CITES.

The report’s authors call on CITES’ Animals Committee to take “appropriate steps” after considering its findings. Such a step would be removing the elephants from the distressing situation they now find themselves in, and giving them the chance to live out the rest of their lives in relative comfort.

Zimbabwe and a number of other nations that African elephants call home have been easily able to sell them on to non-African countries for display in zoos until very recently. But parties to CITES – which are nation states – voted to change the rules at the 2019 conference. The definition of what constitutes an ‘appropriate and acceptable destination’ for export of elephants was limited to “in situ” conservation programmes. Simply put, the change means that African elephants should stay in Africa.

The rule change came into force on 26 November 2019, 90 days after the vote. This grace period between parties approving resolutions and them coming into force is to allow countries time to adjust their national laws and policies to fit the incoming CITES’ requirements.

But Zimbabwe used the time to export the young elephants it had captured in 2018 to China. At the time, elephant biologist and wildlife director at Humane Society International/Africa, Audrey Delsink, said:

We are left feeling outraged and heartbroken at this news today that the Zimbabwe authorities have shipped these poor baby elephants out of the country. Zimbabwe is showing total disregard for the spirit of the CITES ruling as well as ignoring local and global criticism. Condemning these elephants to a life of captivity in Chinese zoos is a tragedy.

Now two parties to CITES, Burkina Faso and Niger, have submitted a report to the authority’s Animals Committee. The report looks at exports of live elephants from African nations since 2010 in the context of CITES’ various rules, such as countries having to find ‘appropriate and acceptable destinations’ for them.

Zimbabwe has outstrippped all others in sheer numbers of exports. The report found it has exported 144 young elephants, mostly to China, since 2010. Namibia came second, with 24 elephants. The report spotlights Zimbabwe’s 2019 export in great detail. The report states that, at the time of writing in May, the elephants were in Longemont Animal Park close to Hangzhou. It continues:

Undercover video footage shows the elephants separated from each other in barren, indoor cells. Many appear to be very young (2-3 years). Recent photographic evidence from China indicates that the elephants have undergone inhumane training by mahouts, presumably to prepare them for entertainment use. There are unconfirmed reports that some of the elephants are going to Yongyuan Biotech Company. The reason remains unknown.

Against the rules, by any measure

The report further assesses whether the export complied with CITES provisions. It notes that Zimbabwe can only export an elephant to ‘appropriate and acceptable destinations’ that are “suitably equipped to house and care for it”, due to a resolution that came into force in 2000. Parties have added further provisions over time. As a result, the scientific authorities for both the importing and exporting country also have to be “satisfied” that the export ‘promotes in situ conservation’, i.e. conservation in the place the elephant comes from. Furthermore, the 2019 landmark rule change, as already mentioned, limits what constitutes an ‘appropriate and acceptable destination’ to those that are ‘in situ’.

Burkina Faso and Niger argue, however, that, by any measure, Zimbabwe’s hurried export of the young elephants didn’t abide by CITES’ provisions. The report says:

there is no publicly available evidence suggesting that the safari park in Shanghai which received the 32 young elephants from Zimbabwe in October 2019 –or any of the likely further destinations –can be considered as “suitably equipped to house and care for” live elephants, and thus meet the recommendations in the non-binding guidance, or that this particular import would promote in situ conservation. …

By any reasonable metric, the conditions of the transfer and housing are demonstrably inhumane.

Highlighting the 2019 rule change and the fact that, as part of that change, parties explicitly recognised elephants are “highly social animals” and removing them from their social groups has “detrimental effects” on their “physical and social well-being”, the report said the export:

not only contravened the will of the CITES Parties, it undermined the good faith and the spirit of the Convention.

In short, the CITES report by two of its member countries is scathing about Zimbabwe’s actions. It asserts that, no matter how you look at it, or what resolution you test it by, the country’s choice to fly out the young elephants was flawed.

The parties recommend that the Animals Committee considers the report’s findings on the Zimbabwe 2019 export, in relation to the ‘appropriate and acceptable destinations’ condition, and takes “appropriate steps”. The report doesn’t clarify what those steps should be.

CITES essentially plays god as an authority. It’s immensely powerful, deciding the fate of countless earthly beings, by controlling the trade in them – alive and dead. But it’s fairly ineffective when it comes to cracking down on wildlife trade offenders. The illegal trade in wildlife, for example, is booming (as is the legal trade). And what action CITES is empowered to take against Zimbabwe, and indeed China, for their apparent transgressions is unclear. South African journalist Adam Cruise told The Canary:

The appropriate steps would be haul Zimbabwe over the coals but just how CITES does that is the question. They are pretty toothless in that regard as they cannot really ‘do’ anything after the fact but simply an acknowledgement that Zimbabwe and by extension CITES were wrong and this sort of export will never happen again may be enough. Sadly, the elephants cant go back in the wild, that’s for sure.

Amid a global pandemic likely to have been caused by the wildlife trade, and a biodiversity crisis, the global wildlife watchdog increasingly appears unfit for purpose. A functional authority would reverse this trade and force the return of these young elephants to Africa, for rehabilitation and care in a wildlife sanctuary. If CITES is unable, or unwilling, to do that then really, what is the point of it?