As Israel prepares its latest landgrab, solidarity activists in the UK are hitting back - Canary Workers’ Co-op 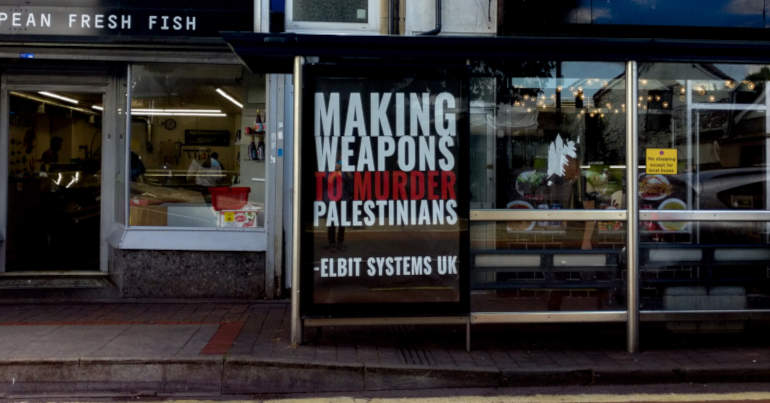 The Israeli state is threatening another massive land theft in the West Bank. With the approval of US president Donald Trump, the Israeli government is planning to make its theft of the Jordan Valley official, and to annex Israel’s illegal colonies in the West Bank.

Meanwhile, supporters of Palestinians in the UK have been campaigning with renewed urgency. And now they say some of that hard work has paid off.

According to a press release from the Apartheid Off Campus campaign on 3 August:

Hebrew University of Jerusalem established its Mount Scopus campus in East Jerusalem in 1968, one year after the Israeli takeover of the West Bank, Gaza Strip and Golan Heights. Under international law, East Jerusalem is occupied territory. The expansion and maintenance of this campus in occupied East Jerusalem is part of the Israeli settlement project, pushing out the Palestinian population in direct contravention of the Fourth Geneva Convention. By maintaining academic links with this institution, UK universities are complicit in war crimes.

The campus is located in an area of East Jerusalem which the campaign says regularly experiences colonial violence:

The Mount Scopus campus overlooks the Palestinian neighbourhood of Isawiyah which is regularly subjected to raids and violence from the Israeli police and army, who use the university buildings as a military outpost

Today the campaign announced a victory, as SOAS and the University of West London announced they would end their relationships with the Hebrew University:

We, the students of Apartheid Off Campus, are thrilled to report the first victory within our thriving academic boycott campaign. SOAS University of London have announced that they have finally terminated their contract with Hebrew University of Jerusalem, due to “concerns raised by the SOAS community.” This is a massive development in our academic boycott campaign for numerous reasons. First and foremost, this sets a precedent that universities in the UK can and will break their links with Israeli universities. This victory also exemplifies the effectiveness of BDS (Boycott, Divestment and Sanctions) as a campaigning strategy.

The BDS campaign has been called for by hundreds of Palestinian civil society organisations. The campaign includes a call for international universities to boycott partnerships with Israeli universities.

However, the Apartheid Off Campus campaign says it won’t stop there. According to the campaign’s website:

Another campaign target, the University of Manchester, divested over $5m from two companies on 3 August. The announcement came after over four years of campaigning. The divestment was from US company Caterpillar, which supplies military bulldozers to the Israeli army, and also from the parent company of travel site Booking.com.

Booking.com advertises rooms for rent in occupied East Jerusalem, and has been listed on a UN database of companies complicit with Israel’s occupation.

Since then, people across England have taken a succession of actions.

On Friday 31 July, a group of activists pushed their way into Elbit Systems offices in London chanting “your profits are covered in Palestinian blood”. They covered the reception area in red paint, and spraypainted “Shut Elbit” on the walls, before being pushed out by security guards.

This video of the action has had over 17.5 thousand views so far. Palestine Action tweeted:

Palestine Action is a grassroots, horizontally-led, direct-action network, focused on getting concrete results. We will take action against complicit companies, and we will pressure institutions to divest from them.

The network is planning to focus on campaigning against Elbit, Israel’s “largest privately-owned arms company”, and JCB. JCB is a British company that supplies bulldozers that have reportedly been used to destroy Palestinian homes. During 2019, incidents involving JCB machines affected almost 30,000 Palestinians, and JCB equipment uprooted over 6000 Palestinian trees.

Palestine Action also tweeted out pictures of several bus stop adverts that have been replaced with messages calling for action against Elbit:

Bus stop posters in Oldham to protest Israel's field-tested weapons being made on our doorsteps #ShutElbitDown #StopArmingIsrael pic.twitter.com/7WrOaTxh8T

The group also tweeted out a picture of a London bus bearing the slogan ‘Stop Arming Israel’:

Huda Ammori, a Palestinian woman who is part of Palestine Action, told The Canary:

While the mainstream media continues to suppress activists’ voices and suppress the issue of Palestine, we will find new creative ways [to take action] and demand that our voices are heard. Whether that’s through ‘adhacking’ bus stops or other means, we will not rest and we will continue to take direct action until all complicity with Israeli apartheid ends.