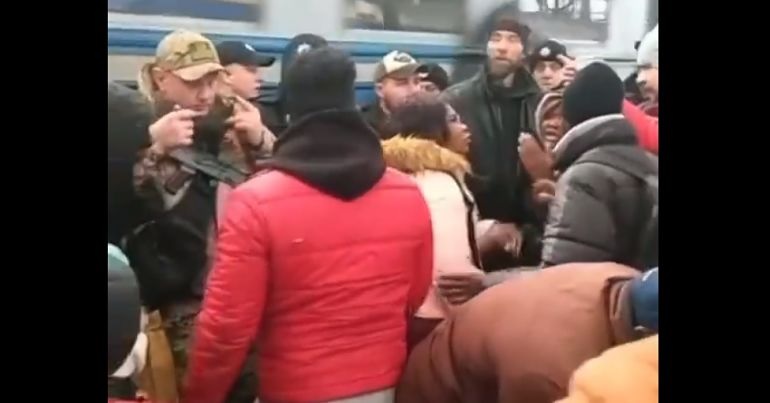 Footage and reports suggest People of Colour trying to flee the Russian assault on Ukraine have been blocked from routes of escape. And some western media outlets have been grotesquely characterising the conflict as exceptional because it’s happening within a ‘civilised’ country.

These are some of the appalling examples of racist actions and rhetoric that have been on display amid the conflict.

Videos circulated on social media suggested that People of Colour trying to board trains or get through borders have been struggling to do so. The #AfricansinUkraine hashtag showed some distressing footage:

The official visuals of Ukrainians blocking Africans from getting on trains. #AfricansinUkraine pic.twitter.com/hJYpM3LY0A

There have been reports of South Asian people struggling to escape Ukraine as well:

Both African & South Asian refugees are at the back of the new processing line that has now been set up by Ukraine to reach Poland. Both communities have been sharing experiences dealing with racism and double standards in getting to safety.#AfricansinUkraine #UkraineRussiaWar pic.twitter.com/LF9C15DScZ

Indian student describes (in English and Hindi) abuse that Indians are experiencing at the border, specifically by Ukrainian border guards. She alleges that women are also being assaulted, hair pulled & that some even have fractures as a result of the abuse. https://t.co/LHKTkJPFjI

A father-of-three trying to leave via bus, meanwhile, told the Independent that his family and others were forced to get off at a border crossing. He said he was told “no Blacks” and commented:

In all of my years as an activist, I have never seen anything like this. When I look into the eyes of those who are turning us away, I see bloodshot racism; they want to save themselves and they are losing their humanity in the process.

Moreover, Insider reported that there are thousands of African students in the country, many of whom are receiving little help to leave from their respective embassies. Medical student Korrine Sky also told the outlet that travelling to potential exit points within the country has proved difficult for some, saying:

Some people have gone to get buses, but they’re not allowing Black people basically onto the buses. They’re prioritizing Ukrainians. That’s what they say

On Twitter, Sky described her and others’ efforts to leave Ukraine in detail. She said that during their long drives to border crossings, they encountered lots of police and military who regularly asked to see people’s documentation. At the border crossing into Romania, she said “local Ukrainians” were aggressive and trying to obstruct their journey onwards:

We have reached the actual border experiencing some threats of violence from some local Ukrainians who don’t believe we should enter. This man keeps circling our car pic.twitter.com/kWw5DjkcL0

Sky said the military ultimately turned them away:

The military just knocked on our window and told us to go now so we are moving the car. The locals are complaining about us to the military and the military is assisting them. We are being compliant in order to remain safe

Racism isn’t only apparent in the treatment of People of Colour trying to flee Ukraine, though. It’s also all over TV screens and in written reporting on the conflict.

Repeatedly, news reports have suggested there’s some kind of exceptionalism in the situation because white, western people are the victims. An ITV News reporter, for example, spoke about the “unthinkable” happening to Ukranians. She stressed that “this is not a developing, third world nation; this is Europe”:

'Now the unthinkable has happened to them, and this is not a developing, third world nation, this is Europe.' pic.twitter.com/BFYvql7iie

CBS News made a similar comparison, with the added emphasis that Ukraine is “relatively civilised” compared to nations such as Iraq or Afghanistan:

This dehumanizing rhetoric is used to justify violence against Black & Brown people all over the world.
Racism is alive, thriving & obviously living its best life in 2022.@CNN joining the ranks of racist trash like @FoxNews, Kudos. #racism #UkraineWar #UkraineUnderAttack pic.twitter.com/sKfcUByKpA

The CBS News correspondent, Charlie D’Agata, has since apologised.

The Telegraph, meanwhile, gave a platform to the UK peer Daniel Hannan to write about the conflict as an “attack on civilisation itself”. His article began with the words: “They seem so like us. That is what makes it so shocking”.

These commentators don’t seem to care that Iraq is widely known as the cradle of civilisation, as it’s where the first elaborate urban centres appeared.

An NBC News correspondent also asserted that Poland is welcoming many people fleeing Ukraine because they “are Christians, they’re white” and “not refugees from Syria”:

This was the coverage on why Poland is now openly accepting refugees:

Again sympathies with Ukrainian people but look how deeply racist Western media is, and they set high moral and democratic standards for themselves. https://t.co/mzfgpyE9mS pic.twitter.com/31hy9ufRz0

And French media in particular seems to be having a field day:

"It's an important question. We’re not talking here about Syrians fleeing…We're talking about Europeans." pic.twitter.com/uclymWEXZw

"We are in the 21st century, we are in a European city and we have cruise missile fire as though we were in Iraq or Afghanistan, can you imagine!?” pic.twitter.com/SzSlJJ9JfR

The BBC, meanwhile, failed to call out Ukraine’s ex-deputy prosecutor general David Sakvarelidze when he talked about how emotional it was to see “European people with blue eyes and blonde hair being killed”:

[Thread] The most racist Ukraine coverage on TV News.

As one social media commentator highlighted, some are arguing that now ‘isn’t the time’ to raise the issue of racism:

I know I’ve tweeted a lot about the blatant racism and xenophobia that has been brought to light by the crisis in Ukraine, and I know a lot of you want to default to “now isn’t the time”. But it is, because governments are actively broadcasting their bias for white refugees.

But we must confront racism wherever, and whenever, it appears. And racism is very evident in the accounts from People of Colour about what they’re experiencing in Ukraine. It’s also apparent in the assertions being made in western outlets.

They’ve characterised the conflict as exceptional because of where, and to whom, it’s happening. And this fuels a narrative that it’s somehow less devastating or consequential when war strikes elsewhere, namely in poorer countries with majority populations of People of Colour.