Why are tube workers on strike? - Canary 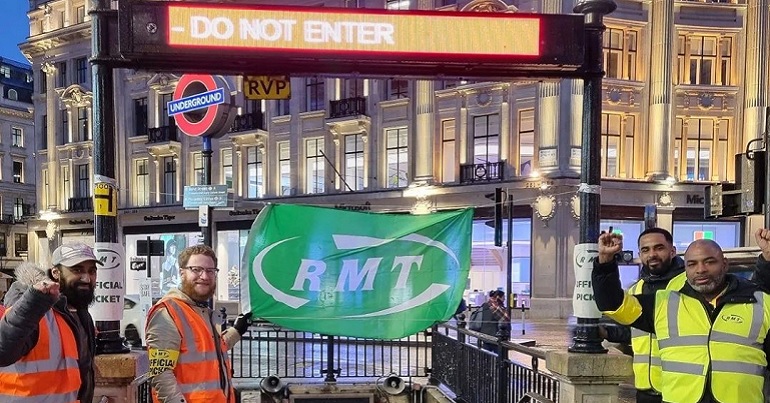 Bosses at the London Underground (LU) and Transport for London (TfL) are playing fast and loose with the truth over why tube workers are striking. It comes as the capital was brought to a standstill by the dispute. LU and TfL have been waging an all-out propaganda war against striking workers, and they’ve been using the pandemic and Londoner’s finances as leverage.

Back in December 2021, TfL said it was freezing recruitment on customer service jobs. The Guardian reported that this meant TfL would not fill 350 jobs when staff left, nor would it fill 250 vacancies it currently has. Or, as ITV News put it, TfL made plans:

TfL and LU claimed it was due to the coronavirus (Covid-19) pandemic. LU director of customer operations Nick Dent told the Guardian:

The devastating impact of the pandemic on our finances has made a programme of change urgently necessary.

‘expensive’, ‘unreformed’, ‘outdated’ and too generous to employees. It said that by reforming the scheme, TfL could save £100 million per annum

So, Khan is carrying out another review. And the RMT is worried this could mean him and TfL cutting workers’ pensions.

Obviously, trade unions weren’t happy, and the RMT planned strike action. Now that’s happening, TfL and LU are back-tracking – making out no one is losing their job.

Everybody out. No – literally everybody

On Tuesday 1 March, around 10,000 tube workers began a 24 hour strike and brought the entire underground to a halt:

@rmtLondon A Bus queue at Liverpool Street Station this morning.
I'd say the @RMTunion strike is very effective. #Solidarity with the @RMTunion – you keep London moving, you deserve decent wages and a good pension. The only way to protect those things is to fight for them. ✊🏾✊ pic.twitter.com/zS9EPZvCu7

10,000 tube workers are taking strike action today and @RMTunion pickets are out in force at all key locations and the action is being solidly supported the length and breadth of the tube network#TubeStrike #JusticeForKeyworkers #StopTheTubeCuts pic.twitter.com/TMPRp5z8sO

Already, TfL and LU have launched a propaganda war against their workers.

We haven’t proposed any changes to pensions or terms and conditions, and nobody has or will lose their jobs because of the proposals we have set out, so this action is completely unnecessary.

That’s clearly not the whole story given that TfL and LU are implementing a recruitment freeze and Khan is reviewing pensions. But Lord went further – trying to spook Londoner’s over their finances. He said workers protecting their livelihoods are:

threatening London’s recovery from the pandemic.

the strikes will cause disruption to Londoners and businesses trying to recover from two devastating years.

Of course, Khan previously attacked tube workers over another strike in November 2021. But the strike is not just down to LU, TfL, and Khan. Because the Tory government has also had a hand in the chaos.

Tories: managed decline of the tube?

The Tories’ pulled TfL’s government funded grant in 2018. This meant the network lost around £700m a year, which it had to try and make up. As the website Ian Visits reported, the effect of the pandemic meant the government had to prop-up TfL with extra cash. As it wrote, TfL is now on its fourth short-term funding boost from the Tories. But it comes with conditions. Ian Visits wrote:

TfL commits to deliver a plan by 31st March 2022 demonstrating the options that exist to achieve up to £400 million of additional revenue or cost savings in 2022/23, in addition to delivering the previously agreed operating cost savings for the 2021/22 financial year.

So, given that the Tories are forcing TfL to make savings, it’s of little wonder workers are scared about their pensions and jobs.

RMT: not having it

RMT general secretary Mick Lynch told PA that workers were caught in “a turf war” between Khan and the Tories. He said:

the mayor agreed to submit proposals to the Government that will result in detrimental changes to pensions.

[Khan] has to decide if he is on the side of key workers who have kept London moving during the pandemic, or Tory ministers hellbent on punishing Tube workers.

So far, the evidence shows Khan bowing-down to the Tories. And with TfL and LU pretending the workers are striking over nothing, it seems they’re no different either. RMT members will be striking again on Friday 4 March. Londoners and everyone across the country would do well to get behind them.

Featured image via the RMT Union