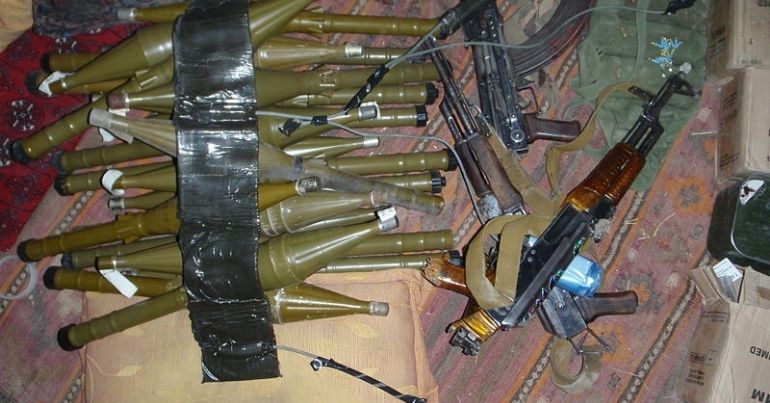 The UK is considering supplying more military equipment to Ukraine. This time it is armoured vehicles, as the war moves towards what foreign secretary Liz Truss has said is a “new and different” phase. And she may be right. But a word of caution here. History tells us many things and one of them is this: weapons aren’t static. They move, they vanish, and they reappear – often in the hands of people that shouldn’t have them.

In 1999, following an intervention in Sierra Leone, eight soldiers from the Royal Irish Regiment were captured by a violent militia named the West Side Boys. They were eventually rescued by troops from The Parachute Regiment and the SAS – one of the latter was killed in the raid.

And what did they find in the militia’s ruined camp? A British Self Loading Rifle (SLR), once standard issue to the UK military, which had been used in the Bloody Sunday massacre in Derry in 1972. Declared destroyed many years before, the rifle had somehow found its way into the hands of an obscure West African insurgent group. By what route, nobody seems to know. But it shows us how arms are much harder to keep track of then we might think. It was reportedly identified by its serial number.

As one of the officers in charge of the rescue operation said in his subsequent memoir:

It was used on Bloody Sunday in Londonderry in 1972 when 13 protestors had been shot — and it had been declared destroyed when the Saville Inquiry into the shootings had asked for it.

This was a single weapon. But there are many examples of complete arsenals going missing – and turning up where they shouldn’t.

Let’s take a look at the effects of NATO’s 2011 war in Libya. As early as 2013, experts and NGOs were reporting that military weapons from Gaddafi’s armouries were making their way across the Sahel. For example, arms were transported all the way to Mali, where an insurgency still rages fuelled by Libyan military hardware.

A UN panel warned that the “proliferation of weapons from Libya continues at an alarming rate”:

Cases, both proven and under investigation, of illicit transfers from Libya in violation of the embargo cover more than 12 countries and include heavy and light weapons, including man-portable air defense systems, small arms and related ammunition and explosives and mines.

But the US also has a habit of losing substantial amounts of arms. In fact, it lost billions of dollars worth just last year.

The West finally pulled out of Afghanistan in 2021. Or, more accurately, they cut and run, leaving the country they had occupied for 20 years to the Taliban. But they didn’t take everything with them.

The figures are hard to pin down but the implications are clear. As The BBC reported in August 2021:

Between 2003 and 2016, the US unloaded a huge amount of military hardware on the Afghan forces it fought alongside: 358,530 rifles of different makes, more than 64,000 machine guns, 25,327 grenade launchers and 22,174 Humvees (all-terrain vehicles), according to the US Government Accountability Report.

This is before we count transport aircraft, attack helicopters, and fixed-wing aircraft. Some estimates of the value of the equipment now in the hands of the Taliban run into billions of dollars.

The spectacular advance of Daesh (ISIS/Isil) in Iraq and Syria in 2014 captured the world’s attention. Parts of the Iraqi army simply collapsed. It left behind US-supplied military equipment which the insurgent group then commandeered. By 2015, reports were suggesting that Daesh had even acquired US tanks and armoured personnel carriers, as well as Humvees and artillery pieces.

In 2017, Newsweek reported that large parts of the ISIS arsenal had been been taken from US shipments to other rebel groups In Syria.

Newsweek cited a report from the NGO Conflict Armament Research:

The United States and Saudi Arabia supplied most of this materiel without authorization, apparently to Syrian opposition forces. This diverted materiel, recovered from IS forces, comprises exclusively Warsaw Pact–caliber weapons and ammunition, purchased by the United States and Saudi Arabia from European Union (EU) member states in Eastern Europe.

On 28 March, Liz Truss told the Commons that the UK was

We are equipping our Ukrainian friends with anti-aircraft Starstreak missiles. We are also strengthening NATO’s eastern flank, deploying troops to Bulgaria, and doubling the numbers of troops in Poland and Estonia.

Flooding Ukraine with arms and military equipment carries a certain appeal for a particular kind of politician. Governments can be seen to be doing something. Funnelling arms seems like a good option which sits below the threshold of nuclear escalation.

But that does not mean there aren’t risks. And Ukraine is different to Iraq and Afghanistan in an important respect. In the latter countries weapons fell to people who they weren’t intended for. In Ukraine, evidence suggests we are placing weapons into the hands of units like the Azov Battalion. A unit which contains card-carrying Neo-Nazis and is integrated into the national military.

This is not an argument against a degree of  military support. I, for one, recognise the right of Ukrainians and other occupied people to resist. But the character of the Ukrainian resistance is complex and multi-faceted. When the war ends, and we all hope that will be soon, what happens to the weapons? Do they come to be a decisive factor in a post-war Ukraine?

When we decide to send additional arms to a war-zone, we need to think about repercussions. Because more often than not these decisions come back to haunt us down the line.

Featured image via Wikimedia Commons/ISAF, cropped to 770 x 403, licenced under CC BY 2.0.