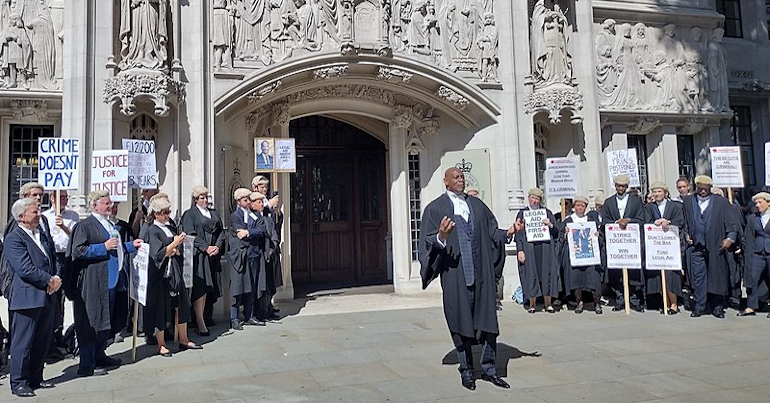 Criminal barristers who are members of the Criminal Bar Association (CBA) have been on an intermittent strike throughout the summer over low pay as a result of cuts to legal aid. Last week, they voted to escalate to a continuous strike action.

Junior barristers are reportedly earning as little as the equivalent of £6.25 an hour during their first three years in the job.

The current strike action is a result of many years of cuts to legal aid, and it is not the first time that barristers have withdrawn their labour. They also went out on strike over pay and legal aid cuts in 2014.

Strikes need to challenge the injustices of the system

At The Canary, we support the barristers’ action, just as we support all of the strikes taking place across the UK. Or – that is to say – we support those barristers who only do defence work, those who prosecute are akin to prison officers and police. The CBA’s strike has already caused significant disruption to the Criminal ‘Justice’ System (CJS). The escalation to continuous strike action promises to bring the system to a near-complete standstill.

However, if strikes like this are going to help us move toward societal change, they need to be about more than just pay and conditions.

Conservative trade union legislation, which was pioneered by Margaret Thatcher, has put a host of legal obstacles in the way of workers taking action. In particular, the Trade Union and Labour Relations (Consolidation) Act seeks to prevent unions from striking about anything other than pay and conditions. If strikes are going to make a real difference, we will need to find ways around this legislation

It’s not enough for the ‘justice’ system to go back to normal once the CBA’s demands are met. We need to bring this system to its knees for good. The CJS is one of the primary mechanisms which the ruling class use to dominate and repress us. It is responsible for untold suffering and misery. It is a racist system which disproportionately affects people of colour. For example, Black people make up 10% of the prison population in the UK, despite only accounting for 3% of the UK’s overall population.

The barristers’ strike has shown that this system cannot operate without the consent of those working within it. The power of the CBA’s action up until now shows that if barristers took similar action with broader demands that challenged the injustices of the system, it could yield results. That, however, would require a commonly shared critique of the CJS among  barristers, and a refusal to be – as the letter below puts it – “part of the apparatus of the state”.

We are publishing this letter, written by Kevan Thakrar, who is currently imprisoned in the segregation unit of Belmarsh prison. He gives a prisoner’s perspective on the strike action.

Kevan has been in prison since 2008, after being convicted of joint enterprise in the murder of three people.

Kevan and his supporters maintain that he was wrongfully convicted, and are campaigning for his release.

Thirteen years of Kevan’s sentence have been spent in isolation. He was placed in the Close Supervision System after defending himself when prison officers tried to attack him. The prison service has been extrajudicially punishing him ever since, despite the fact that he was found not guilty of injuring the officers by a jury on the grounds of self defence.

Kevan’s view on the strike

He wrote this letter about the barristers’ action, from the point of view of someone who has suffered much as a result of the CJS:

Firstly, I should say it is a disgrace that Legal Aid rates are so meagre, especially for new barristers. Only a corrupt capitalist society would think it acceptable to exploit its citizens to the extent that they cannot afford to survive on what they earn, whilst slandering them through the media with propaganda that portrays them as the disgruntled rich.

This said, if criminal barristers had a real belief in defending the innocent from wrongful imprisonment, they would make this strike about a lot more than just their pay-packets and in doing so could draw in the support of wider society.

It has not been the ever-decreasing standards of criminal trials – which have seen the introduction of anonymous witnesses, use of hearsay ‘evidence’, the slander that is bad character evidence, the ability for police and prosecutors to sit as jurors, the permissibility of double jeopardy or the mass use of the Joint Enterprise Doctrine – which has brought them out to protest. The campaigning organisation APPEAL set out 25 vital reforms to the criminal justice system earlier this year. It would not be difficult to adopt these as demands to go along with barristers’ quest for better rates of pay.

Even if it is only to be about money, why not expand the scope to say the fixed fees being raised by 25% is not all they want? They could also fight for an expansion of the groups and situations in which people qualify for legal aid, so that the amount of work available increases as well as the numbers who receive legal representation. This narrow focused approach only exemplifies that criminal defence barristers are part of the apparatus of the state, which enables the function of the injustice system to duly oppress and imprison its population focused mainly upon the marginalised, poor, and those who dare to resist.

It is no surprise that once the accused becomes the convicted, unless you are a rich private paying client, it is practically impossible to get one of these barristers to represent you. Not enough money in it for them; not a care in the world that an innocent person may well have lost their life to imprisonment, even if they are the barrister responsible for the shoddy job that enabled this. They never stepped out over the lack of legal aid for criminal appeals – why bother when the system continues to churn out fresh cases for them to get paid?

So, criminal defence barristers are poorly paid, but when they sell their souls to support a system of oppression they should count themselves fortunate that they are not in the shoes of the millions of their clients who have been let down by the system they are propping up, and wasting years of their lives imprisoned.

Kevan can also be contacted via www.emailaprisoner.com