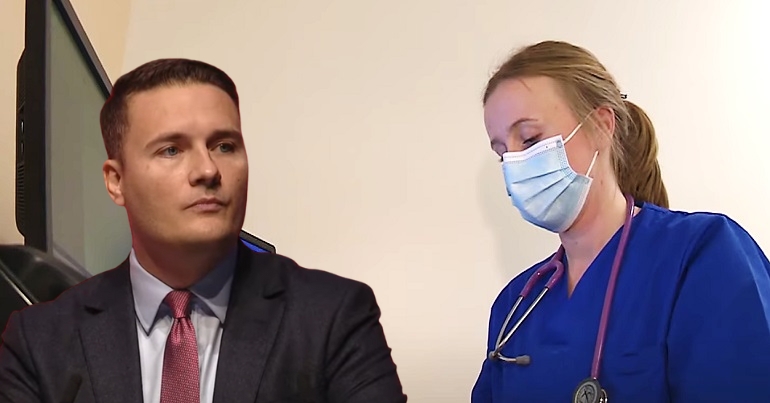 Labour’s shadow health secretary Wes Streeting has enraged healthcare workers and activists with his latest NHS proposals. His comments came in the Rupert Murdoch-owned the Times – and it’s pretty obvious why he’s coming up with the Tory-lite plans he has.

The Times published its interview with Streeting on Friday 6 January. Amid a swathe of commentary on the NHS (and the predictable ‘I’m just like you!” anecdotes about growing up on a council estate), Labour’s shadow health secretary proposed some bold plans for GPs (general practitioners). The Times wrote that:

With a record two million people waiting more than a month to see a GP, the shadow health secretary says: “I think we need to completely rethink what primary care looks like.” GPs should no longer be “the sole gatekeeper” to the NHS, he says. “I’m convinced that pharmacy has a big role to play. This is where competing interests among providers might not always work in the interests of patients. I can well understand why there are GPs who look with anxiety at pronouncements from politicians that community pharmacies should be doing more vaccination or more prescribing, but that’s because they’re thinking about their own income and their own activity. Vaccinations are money for old rope, and a good money spinner, and not unreasonably GP partners are thinking about the finances of their own practice. That’s totally reasonable but what matters to the patient is fast, accessible care, wherever that is.”

Straight out of the blocks, people pointed out numerous problems with Streeting’s idea that GPs were thinking about “their own income”:

Second, this flawed model (and it is flawed) is not the cause of problems in GP services. The problem is that even the level of earnings that this system permits is not enough to persuade doctors to take on the extraordinary workload and stress being a modern GP involves.

⁦@wesstreeting⁩ maybe come and speak to some GPs so we can actually explain how partnerships work, and also dispel some of the misguided statements in this article. Be very careful what you wish for if you wish to get rid of GP partnerships . https://t.co/uOFYlyOBAy

Go on, @wesstreeting, make me salaried. I may leave on time, and take a 'normal-person' amount of leave (rather than the 2/52 I get most years). I may call in sick if unwell. You have no idea how much extra GP partners do.

You will need 3x salarieds to replace every partner. https://t.co/nOIGbrx0pi

Then, Streeting wants patients to be able to self-refer to specialists, and not have to go through their GP. He stated:

Sometimes it’s pretty obvious that you don’t need to see the [family] doctor. I had a lump on the back of my head, during the pandemic. I needed to see a dermatologist but in order to get an appointment with a dermatologist, I had to go through the GP. What a waste of my GP’s time. I think there are some services where you ought to be able to self refer.

The lump could have been a tumour for all Dr Google knows, Wes – and you would have wasted a dermatologist’s time when the GP would have referred you to oncology straight away. Streeting’s nonsense about self-referral has also been heavily dragged on social media:

Words can't adequately express how ignorant you would have to be about the "gatekeeper" role in the NHS to suggest allowing self-referral to hospital, @wesstreeting. https://t.co/RBMXE4IEYG 1/n

He needs to do his homework. Many factual errors here. GP partnership model dying on its feet: paying salaried GPs half the rate of partners means that twice as many are needed. Self referral is barmy. I advise or redirect many patient requests as it is. https://t.co/Lm5qBALGXP

Streeting: feathering his own nest?

So, if Streeting doesn’t want GPs to do vaccinations, doesn’t want them to always have to refer patients, and thinks they’re only feathering their own nests, what the hell does he want them to do? Well, he has another bold plan, as the Times noted:

Instead of GP surgeries he wants modern health centres with a wider range of facilities “where you will have your family doctor, but you’ll also see nurses, you’ll see physiotherapists, you might go for a minor injury or a scan…

Mate, this LITERALLY already exists. In Beckenham, South London, for example, there’s a GP surgery with (shock) nurses, GPs, physios, extended appointment hours, and even minor surgery – and it’s accepting patients. This likely isn’t the case everywhere, but the point is that Streeting isn’t making some revelatory statement. His model already exists.

What Streeting is really doing with his plans is quite obvious to some people. As Dr Julia Grace from campaign group Every Doctor UK pointed out on Twitter:

Ask yourself one question- why are the privately controlled media outlets being so welcoming of Wes Streeting discussing his plans for the NHS?

Of course, Streeting’s position on the NHS comes with the caveat he’s accepted donations from a hedgefund manager with investments in private healthcare companies. Go figure.

If Streeting was so concerned about patients, why not commit to properly funding the NHS? He could aim to improve care for chronically ill and disabled people – an area where the NHS falls down. However, Streeting instead decides to attack GPs. Labour’s shadow health secretary is a charlatan of the highest order – and it didn’t take much to show this, either.