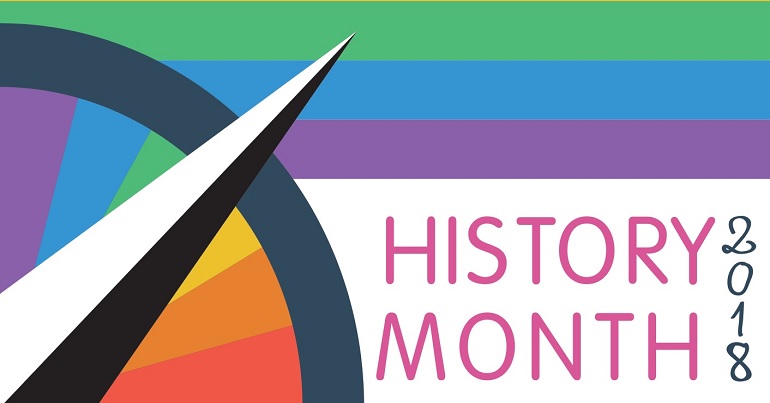 LGBT History Month is drawing to a close, and with it so is a nationwide festival of the community’s history. So before it has its swansong in London, The Canary caught up with the OUTing the Past festival organiser Dr Jeff Evans and Prof Sue Sanders from Schools OUT UK to discuss its highs, more highs, the media, the future, and making history itself.

The fourth OUTing the Past festival has been running up and down the UK since 3 February. The self-titled “National Festival of LGBT History” hosted 12 events across the country. And each hub had unique speakers, debates, activities, performances and presentations.

This year’s festival had a full-to-brimming programme in its 12 hubs. It covered a multitude of topics. One event looked at Warwickshire’s hidden LGBTQ+ history. And another was a talk called Non-binary gender across time and space.

OUTing the Past’s overarching aim is to broaden the debate surrounding LGBTQ+ history in the UK. Formed on the 10th anniversary of LGBT History Month, in conjunction with campaign group Schools OUT UK, it focuses on bringing the community’s history to a wider public audience. It’s needed because mainstream education, media and politics often exclude it.

This exclusion is demonstrable from the events at the festival’s hubs. Take Hilary McCollum’s talk Sapphic Suffragettes: the key role of lesbians in the fight for votes for women at the Liverpool hub on 3 February. The mainstream history of the Suffragettes would have you believe they were straight, middle class women. While the ‘middle class’ element may be fairly accurate, McCollum looked at the “underexplored” possibility that many of the women were bi or lesbian. This is, of course, not to mention the disabled women and those of colour who were part of the movement.

Not news to the mainstream media?

Part of this under-exploration of LGBTQ+ history is due to a flaccid media. As The Canary previously reported, OUTing the Past’s Belfast hub was subject to some negative press coverage, after a speaker made comments many considered controversial. But Sanders told The Canary that this is run-of-the-mill from the mainstream media:

It seems to me that the press love printing bad news. LGBT History Month has been very successful, and its offshoot OUTing the Past as well. So, perhaps we are not news to them.

But OUTing the Past has a story worth publishing; in fact many stories. We are unearthing lives and events that link us to our past. Lives and events that inform us of how our LGBT family survived and thrived: soldiers falling in love with each other; lesbian Suffragettes; magazines that linked lonely lesbians and enabled them to meet and change their lives; hearing how we fought oppression and celebrated pride. Stories that show we are unusual and extraordinary and nothing to do with the stereotypes that have been promulgated. There are wealth of stories which we are proving people want to hear. So perhaps soon the media will catch on. We have seen more coverage this year, so we can only hope.

Aside from the mainstream media’s lack of coverage, Sanders thought this year’s OUTing the Past was “heartwarming” and “wonderful”: 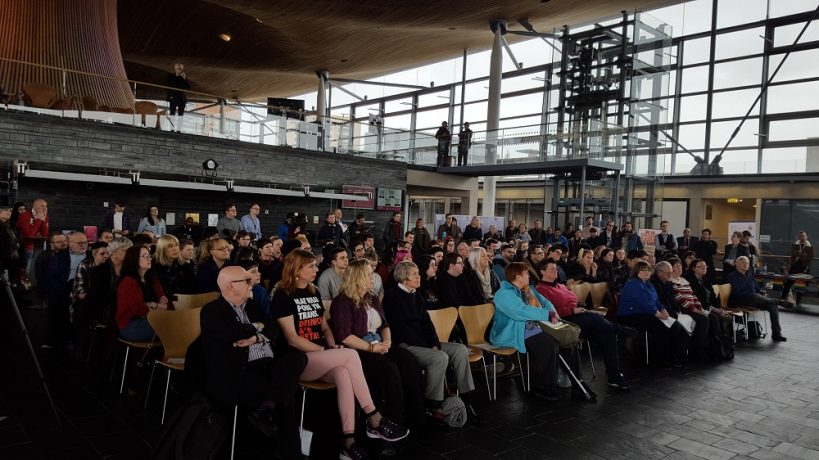 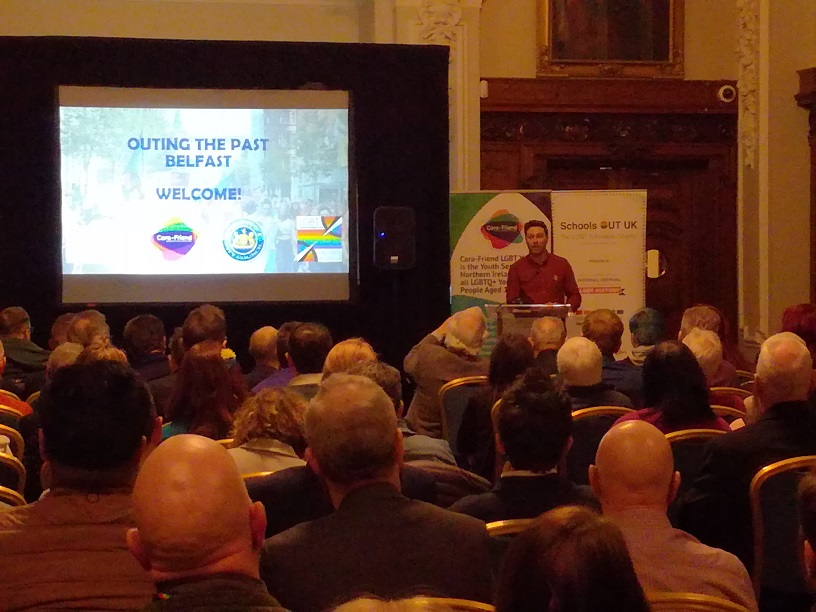 The festival has also been a banquet of diverse topics, including: being ‘out’ in the Merseyside Police; the use of sodomy as a political smear in medieval times; soldiers in love; lesbian clubbing in 1969; and non-binary gender across time and space. For Sanders, it was the festival hubs outside of England which were particularly important:

I have been able to get to a few of our hubs. Getting to Cardiff was amazing; seeing the Senedd full to bursting point was so wonderful. It was truly heartwarming to see so many people wanting to hear the stories of LGBT people hitherto hidden. So, our first hub in Wales was clearly a success.

I was unable to get to Belfast but watching Twitter gave me a sense of the importance of having an LGBT history event in Belfast, and we are watching the repercussions of this with interest. Who knows, we might see some very crucial moves to bring same sex marriage in Northern Ireland off the back of it. Our work, it seems, is not just recording and sharing history; we might be helping make it!

As The Canary discussed with Dr Meg-John Barker much of LGBTQ+ history is bastardised by colonialism. For example, the non-binary gender of Native Americans was effectively whitewashed until recently. Like Black history, LGBTQ+ history is often dominated by establishment thinking, although OUTing the Past has done an excellent job of cutting through this. So I asked Sanders if we’re still a long way off from seeing the real history of the LGBTQ+ movement mainstreamed into the public psyche:

Last year, due to the 50th anniversary of the partial decriminalisation of homosexuality we got to see a lot about white, gay men. LGBT often just means white, non-disabled gay men. Work needs to be done to get the full representation of our community recognised, and we do our best to. But it is not easy when patriarchy reigns. We at Schools OUT UK have consistently worked to be inclusive; we might not always achieve it but we strive for it.

It’s not over ’til it’s over

The festival draws to a close on Wednesday 28 February with a hub at the Bishopsgate Institute in London. After Sanders’ opening address, the talks are:

But the Bishopsgate hub isn’t officially the end of this year’s OUTing the Past. Because, as Evans told The Canary, in March it has its annual conference in Liverpool:

The annual OUTing the Past festival conference of LGBT History marks the climax of this year’s celebrations. It takes place from Friday evening 16 March through to Sunday 18 March; hosted this year by Liverpool’s John Moores University. The event traditionally kicks-off on the Friday evening with a reception and the Allan Horsfall Lecture, this year given by musician and presenter Tom Robinson and called ‘Sing It Loud & Proud’.

The conference is a unique gathering of international academic scholars, LGBT/human rights activists, trade unionists, museums and libraries and others. All of which have a general interest in learning more about LGBT history and activism.

This year sessions will be chaired by Labour’s Shadow International Development Secretary Dan Carden, Prof Molly Merriman, Peter Tatchell and Prof Stephen Whittle. The conference is open to all; admission is on a sliding scale depending on your income. Ultimately, we’re always mindful that such a gathering would still be illegal in many parts of the world. This makes the festival conference even more important and essential to the ongoing struggle for human equality.

OUTing the Past has been a resounding success. Challenging the mainstream false narrative of LGBTQ+ history is no mean feat, but the festival has managed it with aplomb. While there’s still work to be done on the content (for example, there is an apparent lack of bisexual history as a subject), OUTing the Past is going from strength to strength despite its relative infancy. And Evans is confident that next year’s will build on the success of this:

Talks have already begun for 2019, and venues for hubs are already coming in. Given the situation in Northern Ireland, a priority is to seek more opportunities to showcase LGBT history to its people, and moreover to the devolved nations too.

What limits our work is the same reality for all non-core funded organisations: that we can only expand as much as our volunteer team can manage – so anyone who’s keen to join the OTP Festival team to help us take LGBT History to the corners not already reached, please get in touch!

As The Canary always says: “get involved”, and OUTing the Past is one of the most enriching experiences you could hope to get involved in. And maybe you could be part of a little bit of history being made next year.

– Find out more about OUTing the Past, book for its conference launch or register for the full event.

Featured image via OUTing the Past