We need to talk about non-binary gender. It could be a game-changer for society. - Canary 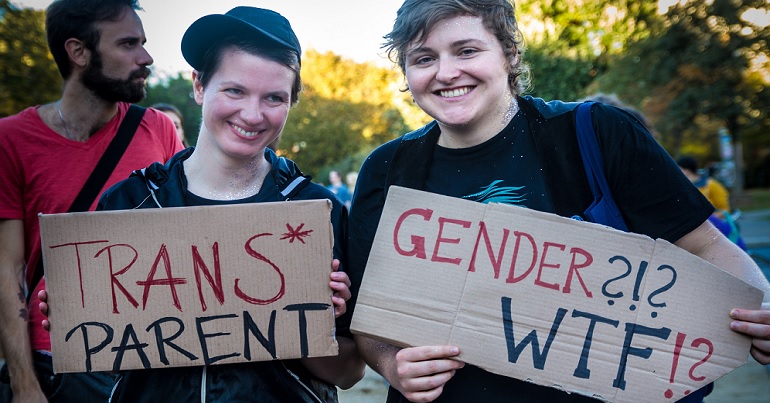 Our society faces many challenges: climate change, the threat of nuclear war, and population growth – to name just three. But does the answer begin with the recognition of an issue that has a history stretching back thousands of years? Something which those in power may prefer wasn’t acknowledged?

A journey through space and time

Non-binary gender (sometimes referred to as ‘genderqueer’) is a term for people who don’t identify as male or female. As the Terrence Higgins Trust explains:

Gender is often referred to as a ‘binary’, meaning two – male and female. The term ‘non-binary’ refers to people who don’t believe that there are just two genders and who exist outside of the gender binary. Non-binary people class themselves as neither exclusively male nor female. They’re under the trans umbrella but may not consider themselves trans.

With February being LGBTQ+ history month, non-binary gender is being featured in the OUTing the Past festival. At its hub at the London School of Economics on Thursday 15 February, a presentation called Non-Binary Gender Across Time and Space is being given, providing the brief – often hidden – history of the UK non-binary movement. And its host Dr Meg-John Barker has spoken to The Canary about how non-binary gender has risen from societal invisibility to begin to become a movement; and what this could mean for our future, as a species.

It can be hard to explain what exactly is meant by non-binary gender. It doesn’t mean that people deny human biology, for example. Nor is it dismissing the social impact that defined gender has. But it does mean that people’s gender identity, as we think of it in modern Western society, is fluid. Calling gender a ‘social construct’ can muddy the waters surrounding non-binary gender. But as the website Living Anthropologically notes as an example:

Money is obviously a social construction. We all choose to believe that pieces of paper with pictures of people on them… have value and can be used to purchase real things in the world… That when we exchange something for those bits of paper or computer bytes, it is because the next person in the chain will also accept that as real currency.

We can readily agree that money is a social construction. But that doesn’t make it not real!

So in essence, recognising that people are non-binary acknowledges that gender, while having biological implications, is not limited to male and female. As Barker told The Canary, non-binary gender is “recognising that at no level – biological, psychological, or social – is sex and/or gender binary”. It is a spectrum, with people at different points on it.

A growing recognition in the present…

Barker says the non-binary movement is “in a time of flux”. And it’s only really been in the past five years that it’s become visible:

There are certainly moves in the academy, politics, and wider society towards accepting that gender isn’t binary. Examples include non-binary inclusive policies in higher education institutions, government moves towards including a further category beyond male and female on forms, etc., banks offering the ‘Mx’ title, and the Facebook range of gender options and gender neutral ‘they’.

But there’s also a huge backlash against anything other than rigid gender binaries. For example, the BBC TV show ‘No more boys and girls‘ faced cries of ‘social engineering’ and ‘child abuse’ on social media merely for the suggestion that we might try to soften the messages children receive about how boys and girls should be; no mention of non-binary gender. Piers Morgan has had several non-binary people on his show in order to ridicule them. And there has been a general trans moral panic going on.

…but a colonial past

Non-binary gender is not a new idea, though. Societies throughout history have recognised gender as being fluid. As Teen Vogue documented, one of the most prominent examples is found among Native Americans, some of whom recognised ‘two spirit’, or non-binary people:

Navajo tribes recognized four genders that roughly correlate with cisgender and transgender men and women, using the terms nadleehi for those who “transform” into femininity and dilbaa for those “transform” into masculinity. The Mohave people used the terms alyha and hwame to describe similar identities. And the Lakota tribe believed the wintke people among them had supernatural powers.

But Barker says colonialism has concertedly tried to wipe non-binary societies off the map:

I think the current understandings of non-binary do move away from the colonialist understanding. There is a recognition of a wide variety of non-binary experience (e.g. people experiencing both masculinity and femininity, people who don’t experience themselves as gendered, androgynous people, people who experience their gender as fluid). Also, there is an increasing recognition that binary gender was something colonially imposed on much of the world which had very different understandings of gender, to the point of genocide in the case of Native American people, for example.

An issue of class?

People now still face barriers to inclusion and acceptance, though. So The Canary asked Barker whether they thought class was an issue in the non-binary movement. And they were resolute in their answer:

Class absolutely comes into it in the sense that greater privilege in other areas frequently makes it more possible to have a liveable non-binary life. With more money and/or power, people have more options in terms of where they live, what kind of work they do and so on. They can tailor those things to ensure they have some community around them, and/or work in fields where there is already some understanding of gender diversity.

But could non-binary gender have a greater impact on society than perhaps we realise?

Society: built on a lie?

Western societal structures and the systems within them, whether they relate to finance, health, employment, democracy, are all based on one notion. That is that human beings are either male or female. And that’s it. There are no variations in between. Mainstream politicians like Jeremy Corbyn argue that our current system is broken and it needs fixing. But to really fix it, do we need to reevaluate the most fundamental principle that human society is based on?

This is very much my argument in my recent book with Alex Iantaffi: How to Understand Your Gender, and in our forthcoming sequel Life Isn’t Binary. Non-binary gender is not just an issue for the currently small number of non-binary identified people. The damage that the imposition of the gender binary has done to women, to men, and to those whose experience doesn’t fit the binary (up to a third of people according to Daphna Joel’s research).

This journey also necessarily involves unpicking the history of colonialism, where the gender binary has been – often violently – imposed on other cultures; and the forms of capitalism which have relied on a belief that men and women ‘naturally’ have complementary abilities which justify women’s unpaid and low paid labour, and men’s entitlement to women’s bodies as highlighted by the recent #metoo movement.

And they believe that challenging our colonial version of gender is crucial. Because it could open the floodgates for a paradigm shift in our thinking across society:

Of course, such questions start us challenging many of the other hierarchical binary divisions that our society has rested upon. For example, straight/gay, white/black, normal/abnormal, healthy/sick, sane/mad, high/low class, and the structures and systems that maintain power imbalances across them. So yes, following the non-binary thread starts us on a journey which requires challenging how we function, but it is a thread that very much needs pulling.

Barker says that OUTing the Past is important. They note that “we can learn lessons from our history, instead of simply repeating it”:

One good example is to compare the way trans people are being treated now to the way gay men were being treated back in the 1980s. There is a great deal of similarity in the squashing of teaching about gender diversity in schools, the concerns about kids’ books which deal about trans people, the branding of trans people as child abusers and so on. Perhaps if we can remember the damage such things did back then, and how things have changed since, we can handle the current panic more sensitively and intelligently.

Barker and their work are groundbreaking and thought-provoking. And it is crucial that events like OUTing the Past play host to them. Because it will hopefully start the ball rolling on a wider conversation about gender and 21st-century society. If we can smash the myths surrounding human identity, maybe the other walls that inhibit our species will come tumbling down too.