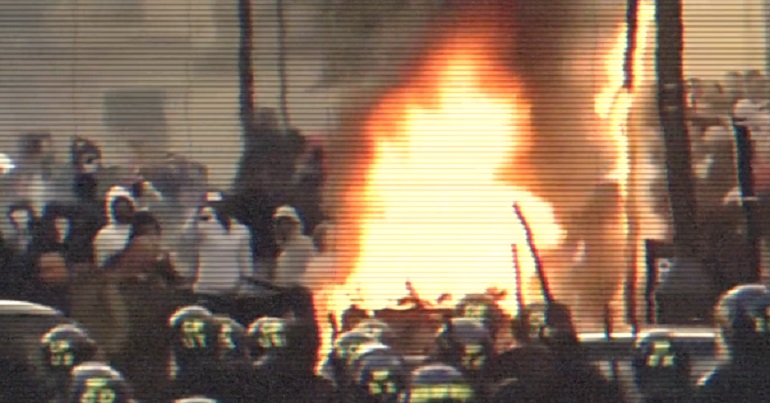 A new short film set in a dystopian future offers us a glimpse of what the world might be like if everything we know falls apart because of the stock markets. And the world imagined by a radical film collective is unsurprisingly terrifying.

WellRedFilms is based in Sheffield. Former members of political party Left Unity founded it in 2015. The group has made over 30 videos since it started, and it says its aim is to give a voice to those people not normally represented in the mainstream media. And its gritty films and raw production values showcase this; none more so than its latest release, Meltdown.

The Canary caught up with writer David Kirkham to discuss the film, its inspiration, and the possibility of art eventually imitating life.

Meltdown follows Robert Smith and his middle class family as they fight to survive in a near-future UK. It’s a country where all public assets have been sold off to private corporations and the stock markets, but the markets have collapsed. Meltdown aims to show and tackle what could happen if the current, corrupt capitalist trajectory continues as it is.

The piece is a departure from WellRedFilms’ previous work like Northern Girl, which showed how precarious employment and housing were affecting young people in London. But Kirkham told The Canary that the two films do complement each other. He said:

Northern Girl is more about the situation in the world right now but the situation in that film could be seen as a precursor to Meltdown; you could easily imagine the family in Meltdown being the family in Northern Girl in the near future. The question of what would happen if there were another global economic crash is one that has been on my mind and that of many other people I know; the ‘business as usual’ and ‘this is the new normal’ response to the 2008 crash could be setting the world up for something even more drastic if and when the next crash happens. Meltdown is a projection of our present onto a scenario presenting our near future.

The film also turns what society would have you believe about ethnicity, race, and class on it’s head. In Meltdown, the white, middle class Smith family are portrayed as the ‘looters’ – doing what they need to do to survive. Meanwhile, the ‘civilian militia’ are a black, working class couple. Kirkham says Meltdown “is neutral as to who is ‘good’ or ‘bad’ in this scenario apart from the 1% who have caused the meltdown”. He believes it was important to break the usual stereotypes, because in his vision of a dystopian future, corrupt capitalism would have reversed the roles anyway:

Due to media representations and reporting, people in so-called ‘western’ societies tend to think that panic and chaos is for ‘foreigners’; there are certainly scenes far worse than those depicted in Meltdown happening across the ‘developing’ world already. Those situations in places like Syria, Iraq and Yemen are caused by the effects of greed and entitlement to resources claimed by the 1% that are alluded to in the film.

Kirkham says “there’s also an assumption that homelessness, near starvation and violent attacks from the state don’t happen to ‘middle class people'”. But he argues that in some cases:

the refugees from Syria and Iraq ARE the middle class, they’re the lucky ones who could afford to pay a people smuggler to get them on a boat, or who could claim asylum in another country due their connections. When the Argentinian economy collapsed in 1998, the middle class took to looting supermarkets. But such situations do tend to affect the working class more and leave bitter resentment. For example, when Hurricane Katrina hit New Orleans in 2005 the white working class were able to flee whilst the black working class were left to fend for themselves…

Meltdown is steeped in the “guerrilla” genre of film making. Shaky visuals, a pulsing soundtrack, and improvised dialogue all draw the viewer compellingly into the Smiths’ world. The cast includes:

And pulling it together is Barbara Bentley, an award-winning director of many years experience, of whom Kirkham says “without her depth of knowledge the film just wouldn’t have happened”, and producer Alan Story.

While Meltdown appears to take a rather extreme view of what could happen should the stock markets collapse (again), Kirkham thinks it’s not so far-fetched. He told The Canary:

The increasing reliance on private finance and private equity seems to be creating a bubble that could burst. You can imagine that if there were another global crash just how it might affect a fully privatised, post-hard Brexit offshore tax haven like the UK. On the back of practices such as private equity calling in its debts there could be catastrophic job losses, leading to a collapse of tax revenue, leading to international investors calling in all our national debts, leading to the inability of people and the state to pay for life’s essentials, especially where vital public services have been exposed to the same debt-based privatisation, in a world where social security is almost non-existent…

And he had a short answer to whether the current Conservative government was leading the UK on a path to a Meltdown scenario:

Overall, Meltdown delivers on all fronts. Gritty in its realism, but provoking thought on viewers’ and society’s preconceptions, it delivers a potential view from the end of the long road we’re currently walking. Kirkham has several hopes for what the audience will get out of watching the film:

Meltdown provides a vision of a dystopian future, one that Kirkham believes could be very soon realised. And that in itself is terrifying.