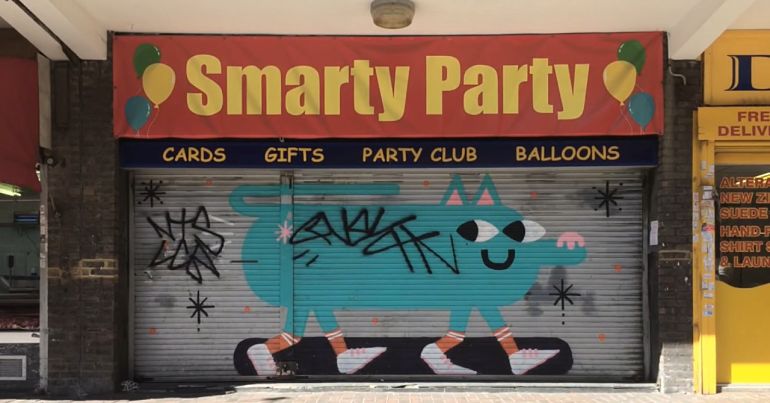 Update: This article was updated at 15:45 on 20 June to include a response from Poplar Harca.

A powerful new documentary by filmmaker and activist Rab Harling shows the harsh realities of regeneration in East London.

‘The Battle of Chrisp Street’

Watch it through the link below:

My new film "The Battle of Chrisp Street" is now online, free to view.

Public funds are being given to suit property developers, not artists. If you enjoy this film, please consider donating using the link below the video. Thank you.https://t.co/DHi8ksdV5I pic.twitter.com/lCeFYk2fhq

10 years ago, the housing association Poplar Harca took over management of both the market and the housing situated around it from Tower Hamlets council. Since then, it has been regenerating the area. Its website states:

Our proposal is to create a thriving town centre – keeping the best of what’s here while providing an improved retail offering; more homes, including more social and affordable; more services and amenities and a greater focus on our heritage.

Harling, however, sees its motives in a very different light:

After years of managed decline, regeneration is looming for Chrisp Street Market. A Registered Social Landlord, a property developer, and a Labour authority seek to create their vision of “the New Shoreditch”, with a brief to “change the social mix” of this 9-acre site, situated in the shadow of Canary Wharf, no matter the cost to the established community.

In the documentary, one shopkeeper explains that while Poplar Harca initially promised to invest in the area, it has actually done the opposite:

They’ve run down the area. So the reason they’ve run down the area is that shops close down; they’ve put rents up; they’ve put service charges up; they’ve made doing business here unaffordable. And they’re very careful about who they give these shops back to. I’ve applied on two occasions for my next door shop; I never got it. I was willing to pay £20,000 per annum. I then came to know they handed this over to a bike shop. 6 months later, when I was speaking to [the] manager, [they] turned around and said they’re not paying any rent; they’re not paying any service charges.

This idea that there’s one rule for local traders and residents and another for outside interests is a core theme of the documentary.

What’s particularly striking is those affected’s perception that they’re being subjugated because of their class. One resident describes how:

In modern Britain, the word regeneration sends shivers through working class communities. In essence, investing money in a community isn’t necessarily a bad thing. But all too often it benefits the wrong people. A resident argues:

We are not against regeneration, but not at any cost – not at our cost. If regeneration is regenerated so the people benefit… it’s not benefitting, they’re driving the local people out of the area. That’s gentrification.

As The Canary previously reported, similar schemes to Polar Harca’s have decimated social housing stocks in London. And the documentary states “over 70% of residents have already been moved off the site”.

A glimmer of hope

After years of ‘managed decline’, Poplar Harca’s submitted plans to redevelop Chrisp Street Market. But, in February 2018, its plans were put on hold after protests from residents. At a Tower Hamlets planning meeting, campaigner Terry McGrenera proclaimed:

There is no study into the social impact that the redevelopment will have, because people don’t matter to them. This scheme is not going to be passed!

Harling’s documentary advises that Poplar Harca plan to re-submit their plans to continue the redevelopment of the market in July 2018. It also claims there’s still been minimal consultation with local residents and traders.

Poplar Harca insists that it’s been consulting with traders, residents and stakeholders for 10 years. It says it has supported traders with fair rents, concessions and advice, and that existing, long-term retailers can stay in the market. It also claims that service charges, which are independently audited, will be be capped for five years after the start of the work.

The housing association told The Canary:

A £345million investment in Poplar and Bow has built thousands of new social and affordable homes for local people. We have also created educational, faith, health and community centres and vital transport infrastructure. We’ve helped over 5,000 residents find work and training opportunities and 6,000 young people are engaged in our youth services.

The Chrisp Street regeneration will provide a bigger Idea Store library, a large community space; a new play area; 2 new green spaces; and a brand new Sure Start centre and is expected to create 450 new jobs.

The reality of social cleansing

Harling’s documentary is beautifully shot. The images of the local trade and shops really give a feel for the culture and history of Chrisp Street Market. Amazingly, Harling told The Canary that it was all shot on a 4-year-old phone on a budget of just £25.

The images of a bustling local market may be a thing of the past soon, replaced by soulless chains and bohemian coffee shops. The Battle for Chrisp Street Market provides a window into a world which is all too familiar for working class communities in the UK.

It is the reality of social cleansing.