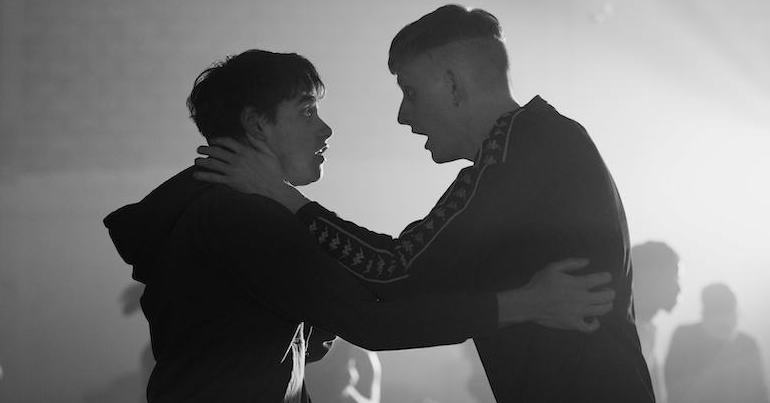 A new independent film called Beats explores the power of friendship and rebellion. Set against the backdrop of the 1994 Criminal Justice Act (CJA), it also shows how new police powers couldn’t stop people dancing. The Canary spoke to director and co-writer Brian Welsh about the inspiration for the film, and its relevance in 2019.

“A succession of repetitive beats”

The film opens with a now infamous quote from the CJA. The CJA gave police new powers to “remove persons attending or preparing for a rave”. It also defined raves as “wholly or predominantly characterised by the emission of a succession of repetitive beats”. Gathering with 20 or more friends to dance was now illegal. But as Beats shows, this couldn’t and didn’t stop the party spirit.

Set in Scotland in 1994, Beats tells a “universal story of friendship, rebellion, and the irresistible power of gathering youth”. The story follows Johnno (Cristian Ortega) and Spanner (Lorn Macdonald). Although the teenagers come from vastly different social backgrounds, the unbreakable bond between them is poignantly depicted in stunning performances.

The story begins with the boys dancing in separate bedrooms in their underpants. The comedic juxtaposes with the deeply emotional from here on in. Shot in black and white, with one significant sequence in colour, it’s a visually stunning film. Locations shift from rundown council flats to sterile new builds and a crumbling post-industrial landscape.

Given that the story focuses on the 90s underground dance scene, the soundtrack also plays an integral role. Intense cinematography and music work so powerfully together that the audience feels transported to another time and place. It’s difficult to create a sense of euphoria in film, yet Welsh manages this in a truly innovative way.

Against all the odds, Johnno and Spanner try to get to an illegal rave, and after that, life will never be the same.

Welsh said that the 90s “was a hugely transformative time”. He grew up in Aberdeen, acutely aware of a culture of violence and heavy drug use around him. He saw “a set path” laid out before him. That is until he discovered parties in a “sweaty club called the Pelican”. This party scene was led, he explained, “by an older generation”, who’d been involved with the free party scene that emerged in the late 80s.

Acid house first drifted to the UK from Chicago in the late 80s. It mixed and morphed to provide the soundtrack for a whole decade, played from DIY sound systems in fields and warehouses across the country. Many pioneers of these parties had been hounded for years by increasingly aggressive cops.

As rents soared and the impact of Thatcher’s right to buy policy took hold, rising numbers of people took to the roads to live in vans and trucks. The brutal police violence in the so-called Battle of the Beanfield in 1985 marked a turning point. The CJA also took aim at travellers and activists – in particular, hunt saboteurs and anti-road protesters. A new offence of “aggravated trespass” criminalised people taking part in non-violent protest.

In 1994, three huge demos took place in opposition to the CJA. It was clear that alternative lifestyles were under attack. But equally, it created an underground social cohesion – to resist, to challenge and yet to keep on dancing in the face of it all.

“A spirit of defiance”

Welsh met leading figures from now legendary sound systems like Desert Storm and Spiral Tribe and said they “took me under their wing”. He explained that “looking back” he can see there was:

An inherently political idea at the core of this movement. It was really about young people coming together, sharing time in a creative environment and sharing good times with each other. This was a time post-Thatcher, when new Thatcherism and New Labour created a spirit of defiance.

This spirit of defiance shines strong throughout the film. It doesn’t shy away from showing graphic and brutal police attacks on the underground dance scene. But what emerges is that friendship and creativity are far stronger forces than the state can ever quash – no matter how hard it tries.

A “Wizard of Oz-like moment”

Welsh feels that 2019 is the perfect time for Beats to hit the screens in UK cinemas. He explained:

Now is a good time to tell that story. Those ideas, the Conservative values of the 90s, feel even more intense now.

It’s rare to see a feature film shot almost entirely in black and white. This creates a startling yet stunning aesthetic. Welsh said this was always his intention. Without giving any spoilers away, the film does “voyage into colour at one point” to create a “Wizard of Oz-like moment”. This is deliberately “juxtaposed with quite bleak urban landscapes” for most of the narrative. Although financial backers cautioned against this, Welsh pushed through and is certain this: “mythologises the film in a really helpful way”.

Throughout the film, there’s a clever use of TVs, pumping out speeches from Tony Blair, who was at that point leader of the opposition. Shot in black and white, this also helps to create a sense of nostalgia back to a decade of irrevocable change. These Wizard of Oz moments held a generation together in the hope that a brighter future did exist, even if only on the margins of society.

Welsh’s past directing credits include Glasgow Girls, In Our Name, and an episode of Black Mirror. Alongside this, he worked with Ken Loach to create shorts supporting Jeremy Corbyn. Loach’s Sixteen Films also helped produce Beats. Welsh said that Loach was supportive during shooting with and has:

always encouraged me to follow my heart. And… always being very much there when it came to my politics. Because we’ve worked together on campaign films for the Labour Party early on with Jeremy Corbyn, he’s been very supportive. He’s part of a wider sense of a very supportive and nurturing family.

This sense of family underpins Beats throughout. Johno and Spanner’s friendship – seemingly against all odds – is stunningly acted, backed up with a strong supporting cast.

As Welsh said, “there’s a strong anti-authoritarian streak” running throughout the film. But this also carries a “subconscious answer to many of the problems in society”. That answer is firmly rooted in “people coming together, supporting each other and adopting a much more community-based attitude to living together”. He continued:

What I find really frustrating and upsetting about the times that we live in today is that anti-authoritarianism has been hijacked by the Farages and the Tommy Robinsons who’re gaining ground politically. Meanwhile, the Tories are in power. To me, the only answer is seeing a change of power and coming back to a sense of support for each other and community.

Although Beats is currently screening nationwide, Welsh said the “challenge is getting people out to the cinema” because it’s competing with an endless run of “big shiny glossy” mainstream blockbusters and sequels. His work resists a “formulaic approach” or easy genre categorisation, but that’s also what makes the film so interesting and so valuable. He said:

Films that are trying to make people question, and think about bigger ideas, for them to break out is far harder today. But audiences see this film and they laugh, they’re moved, they rush off it. But they also leave the cinema reflecting on the world around them and reflecting on what 1994 meant, about the Criminal Justice Act and the implications of that and what it means for their lives now. And that’s the sweet spot for me. Political films often appeal to a specific art house audience and for me, that’s not good enough – there’s no point preaching to the fucking converted.

Beats transports audiences who lived and danced through the 90s, back to familiar scenes through powerful cinematography and an evocative soundtrack. But the dynamic power of friendship and community create universal appeal for all audiences. For anyone who wants to find a sense of hope in the bleakness of 2019, this is a must-see film.