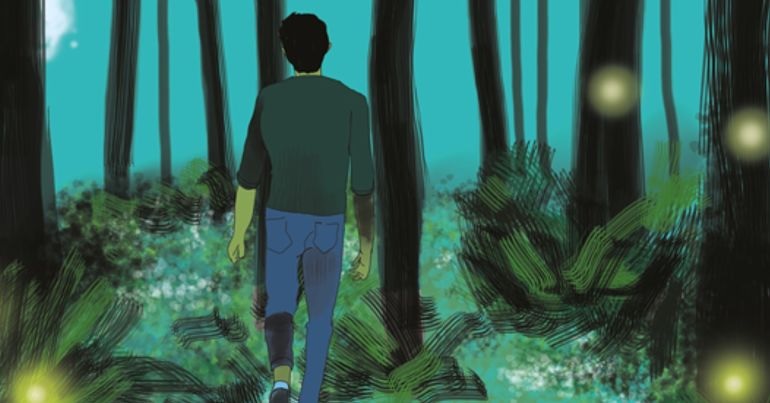 SelfMadeHero, a small independent publisher, released a new title on 5 March. The graphic novel, titled Thoreau and Me, explores our anxieties over the climate crisis and what we should do in the face of them.

Author Cédric Taling explores the issues in an exceptional way. He brings in the spirit of an influential 19th century writer to converse with the protagonist on how to tackle his anxiety and, indeed, the climate crisis itself.

Get back to nature

Henry David Thoreau was a US writer. Modern minds and critics receive the man and his work like Marmite, they either love it or hate it. But he famously penned the novel Walden, a memoir about his time retreating to a solitary life in the woods. It is parts of this book, and excerpts from his journal, that Taling uses as Thoreau interacts with the main character.

Like the graphic novel’s author, that main character is called Cédric. The painter, who lives in Paris, is questioning his own life choices about the world around him amid the climate crisis. Clearly feeling trapped in a world where almost all choices result in further environmental damage and inequality because the whole system has those outcomes at its core, Cédric turns to Thoreau. The environmentalist shares his wisdom with the tortured man about the ills of society – past and present – and the harmony of nature, delivering nuggets like this:

I also have in my mind that seemingly wealthy class who have accumulated dross, but know not how to use it, or get rid of it, and thus have forged their own golden or silver fetters

All nature is doing her best each moment to make us well – she exists for no other end. Do not resist her. With the least inclination to be well we should not be sick.

Ultimately, after a survivalist gear blow-out, parties, apparent premonitions and a lot of soul-searching, Cédric and his family follow in Thoreau’s footsteps. They get back to nature.

Really, get back to nature

The graphic novel is a well-crafted, funny, and often beautiful piece of work. It captures the despair, confusion, and helplessness that living through the climate crisis can bring. It also highlights that there’s not much difference between the human condition in Thoreau’s time and now. But the fact we must change is the book’s essential message.

The change Cédric and his family make is bringing themselves closer to nature, while retaining that part of themselves that compelled them to change in the first place. As the last line of the novel reads:

Things do not change; we change. Sell your clothes and keep your thoughts.

This is not a new idea, as the book makes clear. It’s one Thoreau himself made when moving to Walden. But there is a key difference between the 19th century and the 21st. Thoreau wasn’t living through climate breakdown. His was a society that put us on the path to catastrophe, via the industrial revolution, but he wasn’t living with the consequences of it.

Now we are. And that crisis is destroying the natural world at an alarming pace. So the importance of us connecting with nature couldn’t be greater. Not only could doing so be the key to making us care for and value the natural world – arguably an essential mindset for dedicating ourselves to working out solutions and mitigations to the crisis – but, with the natural world breaking under the weight of our transgressions, the time for people to get back to nature is now. Who knows what’ll be left if they wait to enjoy its splendour.