The Department for Work and Pensions (DWP) is causing chaos in Labour leader Jeremy Corbyn’s own constituency. Council leaders have slammed Universal Credit, calling for the DWP to scrap it. But it’s the real world effects of the benefit which are most jaw-dropping.

The DWP: yet more carnage

As the Islington Gazette reported, council housing chief Diarmaid Ward has exposed the extent of rent arrears owed by Universal Credit claimants. These are claimants who are also council tenants. The council found that:

And compared to Housing Benefit, the difference is stark. Because in comparison, 42% of people who claim Housing Benefit are in rent arrears. And the average amount owed is £352.

But Islington council isn’t the first organisation to report a surge in rent arrears due to Universal credit.

Moreover, in 2018 one housing association issued a damning assessment of Universal Credit. It said that at the time:

A perfect storm of social policies

How much people paid for social housing used to be just based on the “social rent” price. As Full Fact reported, the government sets the cost of these rents at around 50% of the local market rate. But under the Tory/Lib Dem coalition government, new “affordable rents” were introduced. These were at 80% of the local market rate. Now, while current social housing was not hit, social landlords (including councils) could charge ‘affordable rent’ on newly built properties. As the Guardian showed, this meant new build homes at social rent bottomed out. And conversely, affordable rent new build homes rocketed: 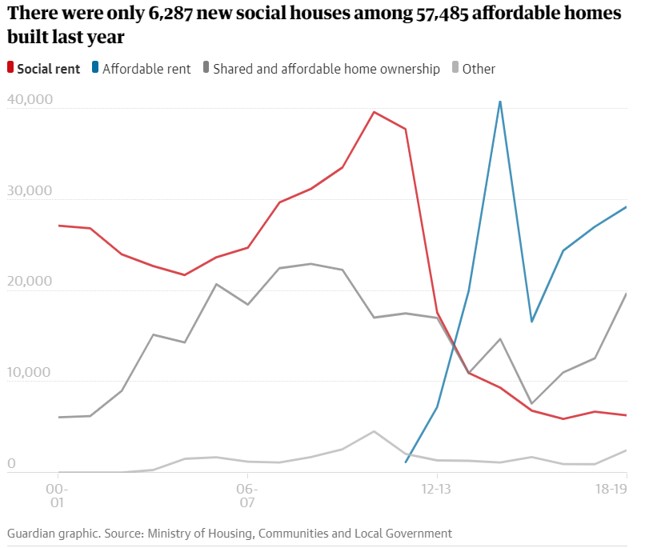 The cost of affordable rents can be huge. For example, Westminster council:

would require council tenants in a three-bedroom home in the borough to have an annual income of £109,000 in order to be considered affordable.

In Islington, the average social/council rent in 2017/18 was £116.55 a week. Data on affordable rents is not available. But the 2017/18 price of a two-bedroom private sector rental house was around £459 a week. This would make the affordable rent for a similar property around £367 a week; more than double that of social rents. And moreover, between 2013/14 and 2017/18, Islington Council only built 690 “affordable” homes for social rent. And it hasn’t said whether these are available to tenants at social or affordable rent.

While Universal Credit will sometimes cover all people’s housing costs, it’s still subject to the benefit cap. So, anything over this claimants have to pay themselves. It may well be this perfect storm of policies which is throwing some people into arrears. But the situation in the private sector is even worse.

As BBC News reported in 2019, the Residential Landlords Association said that 54% of its members had tenants on the benefit fall into rent arrears in the past year. Central government currently has no control over the private rental sector. So, landlords can charge as much as they want. Currently, in London the calls for private sector rent caps are growing. As CityA.M. reported, current mayor Sadiq Khan has made private rent caps a policy for his re-election campaign.

But still, the DWP is just adding to this housing crisis with Universal Credit.

It seems that far from helping claimants, the benefit is throwing people into chaos and debt. But the wider housing issues that are also at play just entrench these problems. Islington council is right to call for the DWP to scrap Universal Credit. But given that in Islington 42% of Housing Benefit claimants are also in rent arrears, there’s clearly wider problems with welfare that play into people struggling with rent. In terms of housing, a huge realignment of housing policy, and society’s attitude towards it, is needed. Because far from being a human right, UK housing is turning into a luxury.