More Brexit nonsense, this time over the tampon tax - The Canary 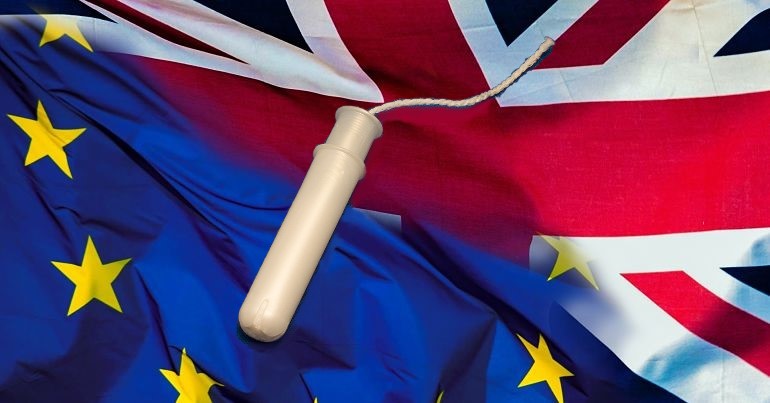 On Saturday 7 March, Sky News reported that the government was set to scrap the so-called ‘tampon tax’. It said that new chancellor Rishi Sunak was going to abolish VAT on sanitary products in his upcoming budget. But Sky News said it was because of Brexit, when actually this isn’t strictly the whole story.

Period poverty is when girls and women can’t afford sanitary products. As the website Global Women Connected noted, it’s a major issue across the UK. This is because:

In England, the Tory government recently rolled out a scheme for free sanitary products in schools. The Department for Education (DfE) will fund it. But as The Canary previously reported, many people gave the new deal a lukewarm response. This is because schools have to opt-in. Also, it doesn’t address the period poverty women above state-education age face.

VAT on sanitary products is a factor in period poverty. It’s sometimes referred to as the ‘Tampon Tax’. Currently, the government sets the rate at 5%. But now it looks set to abolish this altogether.

There is currently a 5% levy on women's sanitary products, which ministers have been prevented from removing due to EU rules on VAT https://t.co/gGQgzHgosl

Our reproductive system has put us at a structual disadvantage, until now.
The proposal for banning the VAT on sanitary products is one closer step dejure gender equality. Many days period poverty has cost me school hours. There is hope for younger girls#TamponTax

While others pointed out that the sanitary products industry is, really, a bit of a scam:

#bbcbreakfast it’s fine that VAT is going to be dropped from sanitary products, but it’s a huge profitable industry – perhaps this profiteering should have margins lowered, as manufacture and distribution of these products is very cheap and should be to benefit of consumer.

Some people were hailing the policy shift as a victory over the EU:

Inside the EU’s vat regime, woman have been penalised by the Brussels bureaucracy, paying 5% more in tax on sanitary products. This madness will end on 1st Jan 2021 ⁦@RichardGCorbett⁩ https://t.co/lecLz6UuO6

But in reality, if the UK had stayed in the EU, the government would have been able to scrap the tampon tax anyway.

Currently, EU guidelines state that sanitary products VAT has to be at a minimum of 5%. It was former chancellor Gordon Brown who reduced the VAT rate to this in 2001. But recently, the European Commission approved regulation to allow member states to reduce VAT on sanitary products to 0%. As one person on Twitter pointed out:

Do you think #BBCNews will mention that the EU has itself published proposals to abolish VAT on sanitary products, which could take effect just a year after the end of our transition period?
No, me neither. #r4today

So, the chances are that Brexit or no Brexit, the UK government could still have scrapped the tampon tax.

But even with this, the UK government is still lagging way behind what Scotland is doing.

As The Canary previously reported, the Scottish government already gives some funding to councils. This is to provide free sanitary products in some schools and public buildings. Scottish parliament buildings also offer the same service. But now, Labour MSP Monica Lennon has tabled the Period Products (Free Provision) bill in Holyrood. It calls for universal free sanitary products across the country.

At first, the SNP-led Holyrood government didn’t support it. But it changed course in February this year, and the bill has now passed stage one in the Scottish parliament.

So, while the abolition of the tampon tax is to be welcomed, all is not quite what it seems. And moreover, the Westminster government should be following Scotland’s lead in pushing for a world-leading policy. But from the Tories, that may be too much to ask. Which leaves women, through no fault of their own, still paying the cost for something essential.