The Department for Work and Pensions (DWP) just admitted it doesn’t know how much Universal Credit actually costs per claimant. It may seem like a minor issue given the exploding price tag of the benefit. But when you really look at it, it’s yet another damning indictment of the DWP’s failure. And it’s helped blow previous confessions out of the water.

The DWP: ‘no information held’

what the average cost… is of processing a universal credit claim for a single one month assessment period.

Assessment periods are for a calendar month, which starts on the date people made their original claim. It’s the period the DWP uses to work out how much to pay people. Parliamentary under-secretary Will Quince gave a short but telling answer on 4 March:

The information is not held.

On the face of it, it may seem unsurprising the DWP doesn’t hold this information. Because Universal Credit is a highly complex system which has rolled both unemployment and sickness/disability benefits into one. So, a lot of claimants with a lot of different circumstances are all now under one roof. But this shouldn’t mean that the DWP can’t do detailed analysis. And moreover, the first problem with this lack of analysis is that the cost of Universal Credit is already a contentious issue.

Just in February, the DWP had to admit it had delayed the rollout of the benefit again. This is going to cost it another £500m. The rise follows a pattern of ballooning costs. For example, in 2018 the government pumped another £1.7bn into Universal Credit. This prompted the thinktank the Resolution Foundation to say it would cost more than the system it was replacing.

The most recent forecast by the Office for Budget Responsibility (OBR) put the cost of Universal Credit at £6.7bn by 2022/23: 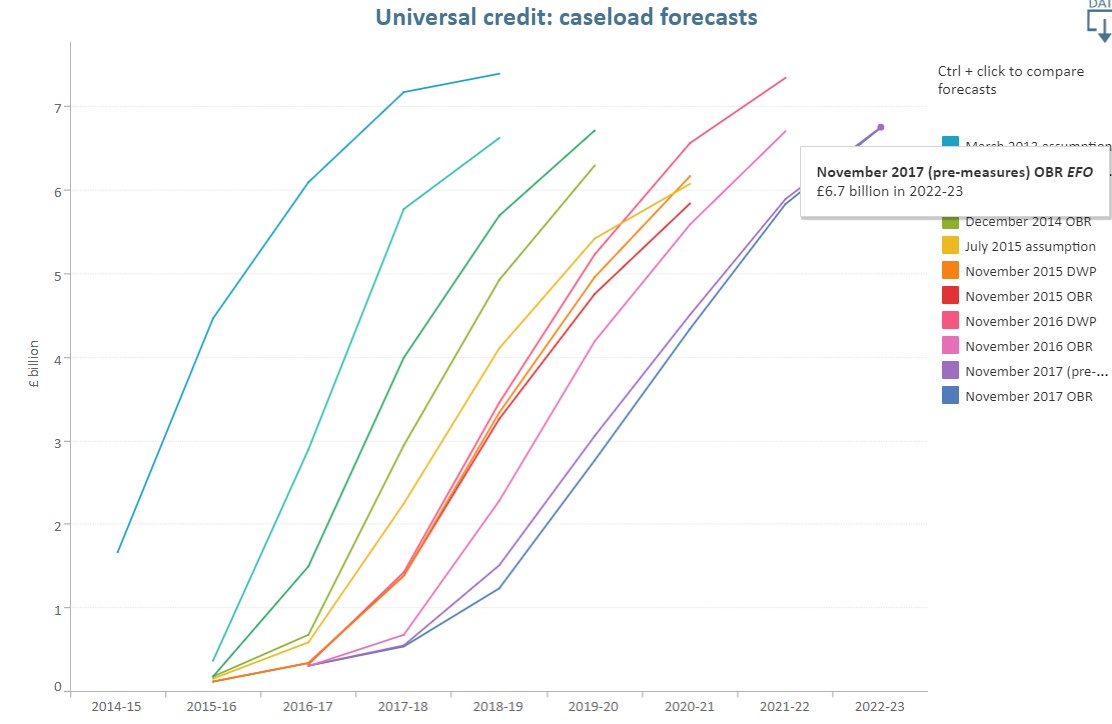 Aside from the cost, it may seem unimportant that the DWP does not know how much it spends per claimant, per assessment period. But this lack of data gathering is a consistent DWP problem. And it’s one which is causing chaos and misery for claimants.

Universal Credit divides [pdf, p19] claimants into groups. These are based on what level of work the DWP says they’re capable of. They are:

Then, Universal Credit breaks these groups down further. The DWP puts people in one of another six ‘labour market regimes’. All of these groups have different needs. And the DWP interacts with all of them differently.

So, it would seem prudent that the DWP would want to know how much it spent on, say:

Because, beyond the six possible groups, there are also more subsets of people. For example, the DWP would place people with limited capability for work in the work preparation group. But it would also put parents/guardians with children aged 3-5 in there.

The point being, all these groups are different. They all need varying amounts of DWP time and resources. Yet it has no idea how much it spends on each group. This means it cannot know if how it’s supporting claimants is working effectively or not. But this is not the first time the DWP’s lack of analysis has effectively thrown claimants under a bus.

In recent months, the DWP has let slip numerous confessions about its lack of analysis of Universal Credit. These include:

Another written answer by a DWP minister exposed a host of other failings regarding Universal Credit. The department admitted it doesn’t record:

But perhaps most worryingly, the DWP is not collating the data on claimant deaths under the benefit. As The Canary previously reported:

it has also repeatedly avoided giving Universal Credit mortality rates to people making Freedom of Information (FOI) requests. Just two weeks ago, it swerved an FOI on the subject. Previously, it only admitted to four deaths after John Pring at Disability News Service (DNS) forced it to.

When viewed as a sum of their parts, these collective DWP incompetencies paint a disturbing picture. It’s one where the department has no detailed macro data on just how Universal Credit actually affects claimants. Moreover, it blows its claims of a ‘test and learn’ policy out of the water. Because the DWP is simply not collecting enough data to be able to rigorously evaluate whether the benefit is actually working. Therefore, it cannot know what changes will actually be effective.

The DWP is playing fast-and-loose with people’s lives. At best, it cannot cope with a complex system running away from it. But at worst, it shows wilful negligence. These latest revelations merely add to the damning list of admissions from the department. And they’ll do nothing to allay concerns over Universal Credit.