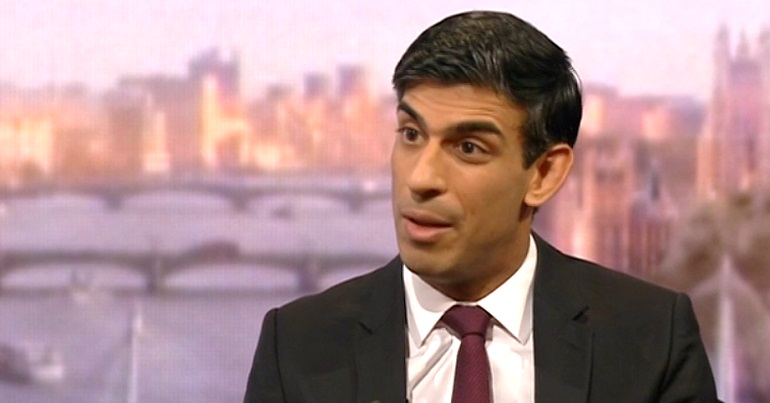 The new chancellor just fell apart on the Andrew Marr Show when the host pushed him about the upcoming budget. And Marr may have just exposed that the Tories are already set to break a key election pledge.

On Sunday 8 March, Rishi Sunak mainly discussed coronavirus with Marr. But towards the end of the interview, the host moved on to the upcoming budget on Wednesday 11 March.

Marr pressed Sunak on the issue of extra funding to fight coronavirus. But the BBC host (for a change) pulled a blinder. Because he began by asking Sunak:

Are you going to stick to the three, clear fiscal rules that the Conservative Party put in its manifesto

The Tories’ fiscal rules are how the party intends to make sure that government finances are controlled. It pledged to:

So, what Marr was asking was if the government was going to backtrack on its manifesto pledges to be able to spend more money on coronavirus.

But Marr wasn’t having it.

Will government debt be lower at the end of this parliament?

Will you guarantee not to borrow to fund day-to-day spending?

can you guarantee to balance the budget within three years?

And then Marr summed up by saying:

All I’m asking you is whether you’re going to stick by the clear three fiscal rules on which your government was elected only a few weeks ago. And if you can’t say ‘yes’, then people will assume the answer is ‘no’.

Never mind the fact that since Conservative-led governments took charge of the UK in 2010, public debt has risen by around £800bn. Because, in other words, Sunak wouldn’t say if the Tories will balance the government’s budget. Nor would he say if it would borrow money to fund day-to-day spending. Why does this matter? Not least because the idea of borrowing more money was a constant stick the Conservatives used to beat Labour with.

As BBC News reported, in the run-up to the 2019 general election, the then chancellor Sajid Javid slammed Labour’s spending proposal. The Conservatives had plucked out of seeming thin-air that Labour’s manifesto would cost £1.2tn over five years. At the time, Javid told Marr:

These are eye-watering levels of spending… it will be absolutely reckless and will leave this country with an economic crisis within months.

But now, it seems that being “reckless” with the public finances, based on the Tories’ own standards, are themselves . With no clear commitment on any of his parties’ manifesto pledges, has Sunak literally just broken a manifesto pledge? All eyes will be on parliament, on Wednesday, to find out.