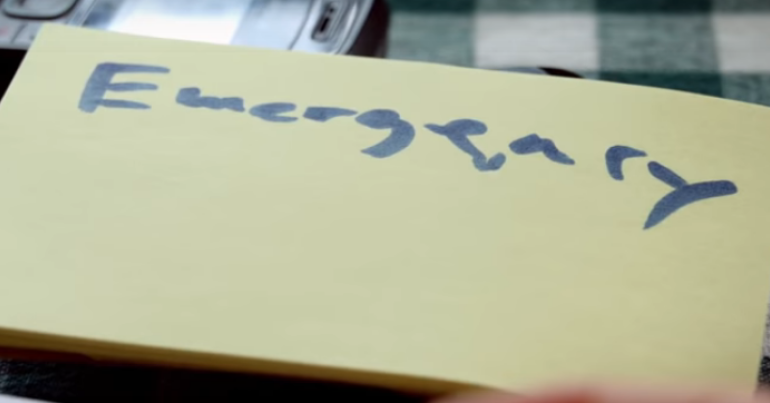 A handwritten note by WikiLeaks founder Julian Assange that simply says “emergency” could prove pivotal in demonstrating how deceitful the prosecution is in its determination to extradite him to the USA. The note features in film footage and reveals how certain charges against Assange are highly questionable. In doing so, it exposes the fragility of the extradition case.

This assessment is backed by another film that includes rare footage of Assange inside the Guardian’s ‘bunker’.

During the extradition hearing, overseen by Judge Vanessa Baraitser at Belmarsh magistrates’ court in London, the prosecution alleged that by publishing unredacted secret US cables Assange had put lives in danger.

However, there is a very different narrative to that.

Political commentator and former UK ambassador Craig Murray attended the extradition hearing and published a summary. He observed that barrister Mark Summers QC for the defence explained how Assange and award-winning journalist Sarah Harrison warned the US State Department that they needed to act as lives were at risk:

Once Der Freitag [a weekly German magazine] announced they had the unredacted [US cables] materials, Julian Assange and Sara [sic] Harrison instantly telephoned the White House, State Department and US Embassy to warn them named sources may be put at risk.

Film footage backs that up.

The film, the note, and the phone call

A video extract from 2011 (and featured in the flawed 2017 film Risk) shows Harrison phoning the State Department to tell them they had a problem. But during the phone call it was apparent the official at the other end wasn’t taking the warning seriously. At that point Assange dramatically held up a handwritten note to Harrison, urging her to explain that the situation was an emergency, it also suggests that he felt a meeting was needed.

This is how it played out:

The extradition hearing was provided with further details of what happened on that day. Murray explained:

In 2011 WikiLeaks also issued a statement about the phone call to the State Department:

Cliff Johnson (a legal advisor at the Department of State) spoke to Julian Assange for 75 minutes, but the State Department decided not to meet in person to receive further information, which could not, at that stage, be safely transmitted over the telephone.

Murray observed how the evidence submitted to the extradition hearing about that phone call to the State Department:

But the controversy about the unredacted US cables and where blame lies doesn’t end there.

In 2011 Guardian journalists David Leigh and Luke Harding published a book, WikiLeaks: Inside Julian Assange’s War on Secrecy. The book provided a passphrase to the unredacted US cables.

The passphrase Leigh and Harding disclosed featured prominently in a chapter heading of the book: 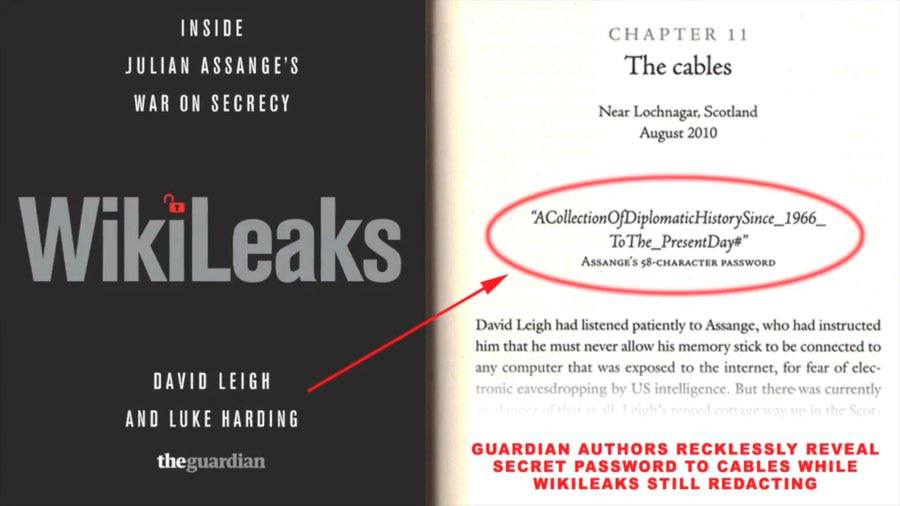 It’s worth mentioning that Harding was also co-author of a Guardian article that claimed Paul Manafort, Donald Trump’s former campaign manager, met with Assange at the Ecuadorian embassy in London. In an exclusive, The Canary went on to report the claim that the story was false.

In response to our last article on the Assange extradition case, Leigh has insisted that allegations the defence had made against him at the extradition hearing in regard to the publication of the password were “complete invention”.

Unfortunately, the allegations you (quite accurately) report the defence making about me are a complete invention. The Guardian put out a statement at the time explaining this. The hoax about the alleged effect of the “password” does not help Assange’s cause. Other media have run my or the Guardian’s statement. In fairness, maybe you should do the same?

The Guardian statement he referred to was penned by former WikiLeaks journalist turned critic James Ball. It denied that Leigh and Harding bore any responsibility for the security breach:

It’s nonsense to suggest the Guardian’s WikiLeaks book has compromised security in any way. Our book about WikiLeaks was published last February. It contained a password, but no details of the location of the files, and we were told it was a temporary password which would expire and be deleted in a matter of hours.

It was a meaningless piece of information to anyone except the person(s) who created the database.

No concerns were expressed when the book was published and if anyone at WikiLeaks had thought this compromised security they have had seven months to remove the files. That they didn’t do so clearly shows the problem was not caused by the Guardian’s book.

However, in a 25 February 2020 tweet WikiLeaks editor-in-chief Kristinn Hrafnsson made it clear that he strongly disagreed with those claims:

David Leigh again dismisses his responsibility for the release of the unredacted cables. He posted a password for its encrypted file – in his book. Now claims Assange told him the password was temporary. Leigh himself writes in his book about a temporary WEBSITE. Not the same. pic.twitter.com/e1q9GUdDlg

Murray also observed that during the extradition hearing the defence:

described at great length the efforts of Wikileaks with media partners over more than a year to set up a massive redaction campaign on the cables. He explained that the unredacted cables only became available after Luke Harding and David Leigh of the Guardian published the password to the cache as the heading to Chapter XI of their book Wikileaks, published in February 2011.

The defence further pointed out that WikiLeaks had a comprehensive ‘harm mitigation program’, used to redact names from leaked documents prior to publication.

Moreover, it was claimed, at the 2013 court-martial of whistleblower Chelsea Manning, that the documents regarding US war crimes Manning had allegedly leaked (and which were subsequently published by WikiLeaks) had put lives at risk. But those allegations were dismissed after considering the evidence US counter-intelligence official Robert Carr submitted.

Leigh, without any basis, and in a flagrant violation of journalistic ethics, named Bradley Manning as the Cablegate source in his book.

Inside the Guardian’s bunker

But there’s more evidence that supports the defence’s narrative on the redaction of material by Assange.

Award-winning Australian journalist Mark Davis shows how Guardian journalists appear to neglect any responsibility for redaction of the Afghan war logs. Instead, they left that task to Assange, who, according to Davis, spent several days and nights seeing to that.

It would appear that both the prosecution and Judge Baraitser are lacking in their knowledge of what happened with the US cables and the precise circumstances that led to the publication of the unredacted version.

Indeed, far from risking lives, as alleged, there seems to be clear evidence via the video – with that revealing note – that Assange went to great lengths to protect them.

So either the prosecution did not do its homework, or potentially it deliberately tried to mislead the court. One way or another, the truth is coming out.