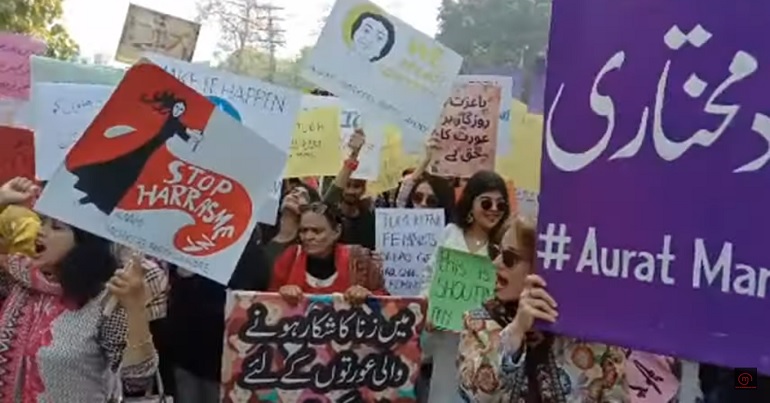 International Women’s Day has become a national event in Pakistan. Women and non-binary people have taken to the streets along with men in marches coordinated nationally under the banner ‘Aurat March’ (Urdu for ‘Women’s March’).

Marches have taken place in Islamabad, Karachi, and Lahore among other cities. They may be happening in different places throughout the country, but the atmosphere is consistent – and it’s electric:

Aurat March is a network of female grassroots organisers who have mobilised to ensure the marches are safe and successful. While women have their individual reasons for marching, the organisers laid out a specific set of demands ahead of the rallies. These include freedom from sexual harassment and violence, economic justice, reproductive rights, and environmental justice:

One volunteer shared the sense of danger that women who march are facing. She said they fear harassment and doxxing as well as acid attacks and bomb threats. Pakistani society, which still remains patriarchal and largely conservative, hasn’t been open to women asserting control over their own bodies.

My body my choice

But the backlash hasn’t held them back. And women have defended the slogan and shared reasons for why it resonates with them. And since it’s International Women’s Day, women are the ones we should be listening to:

I personally searched and read details of every case of violence against women and children reported since the start of this year.

After hours of going through the traumatic accounts, I compiled all the cases and their details and I decided to share them with everyone.

Importantly, the slogan has started a conversation about women’s bodies which has, so far, been silenced by social norms:

Aurat March has already won in it's philisophical purpose 'cause every household is now talking about us, every person – whether they support it or not – is now part of the discourse. We will be forced to DECONSTRUCT a conversation we were NEVER allowed to have. #AuratMarch2020 pic.twitter.com/P2tjwXfaNp

While the slogan has generated much controversy, at its core is bodily autonomy, i.e. consent and reproductive rights for women. This mega-banner for the Lahore march had women’s experiences of sexual assault and harassment painted on it:

However, some placards transcend language and aren’t beholden to translations:

One of the most heartening aspects of the marches is how inclusive and intersectional they appear to be. The trans rights flag can be seen in this video:

And women are using the march, as well as the viral hashtag #AuratMarch2020, to call attention to the plight of women from ethnic and religious minorities:

On this Women Day, I want to remind you the abuse and sexual harassment the women of erstwhile tribal areas (militarised zone) have been facing from security forces personnells. These women stood up for themselves (In Waziristan&Mohmand agency) last year bravely. #AuratMarch2020 pic.twitter.com/SiDJtmJIUz

Bringing attention to the issue of forced conversions, which has plagued religious minorities in Pakistan, is just one of the positive outcomes of the march. In forced conversions, “women and girls from religious minorities are abducted, forcibly converted and then married off to their abductors”. Horrific in itself, this crime is often made worse by the fact that victims are often girls under 18:

At the end of the day, the demands of Pakistani women aren’t that different to women anywhere else in the world – dignity and respect:

Happy Women's Day to all the beautiful women out there! #AuratMarch2020 pic.twitter.com/BfGGjuVzAY

So whether it’s demanding bodily autonomy and equal rights, objecting to patriarchal culture, or any number of issues affecting them, Pakistani women are using today’s marches to make themselves heard. And they’re using their own voices, loud and clear, to do so.