The DWP has 'buried' its secret report into foodbanks - The Canary

The Department for Work and Pensions (DWP) is sitting on its own ‘secret‘ investigation into foodbank use. It should have released it in October 2019. Now, an SNP MP has put the issue back on parliament’s agenda. But one campaign group told The Canary that it thinks the DWP ‘buried’ the report on purpose.

As the Guardian reported, more and more people in the UK are using foodbanks. The Trussell Trust said that in 2018/19, as many as 3 million food parcels were given out by all UK foodbanks. Around 2% of households in the UK received a parcel. Moreover, the Trussell Trust alone gave out over 800,000 food parcels between April and September 2019. This was a 23% rise on 2018.

The Trussell Trust also says that foodbank use has increased in areas where the DWP has rolled out Universal Credit. And it says that over 60% of people referred to foodbanks have had “problematic experiences with the benefits system”. These include:

identify any areas of DWP policy or operational practice that may have contributed to a rise in demand for food bank services.

The DWP set aside £217,000 to pay for this research. As the Guardian noted, the DWP had made some people sign gagging clauses (i.e. “non-disclosure agreements”). This would stop them from talking about the research in public.

The full leaked document from the Guardian is below: 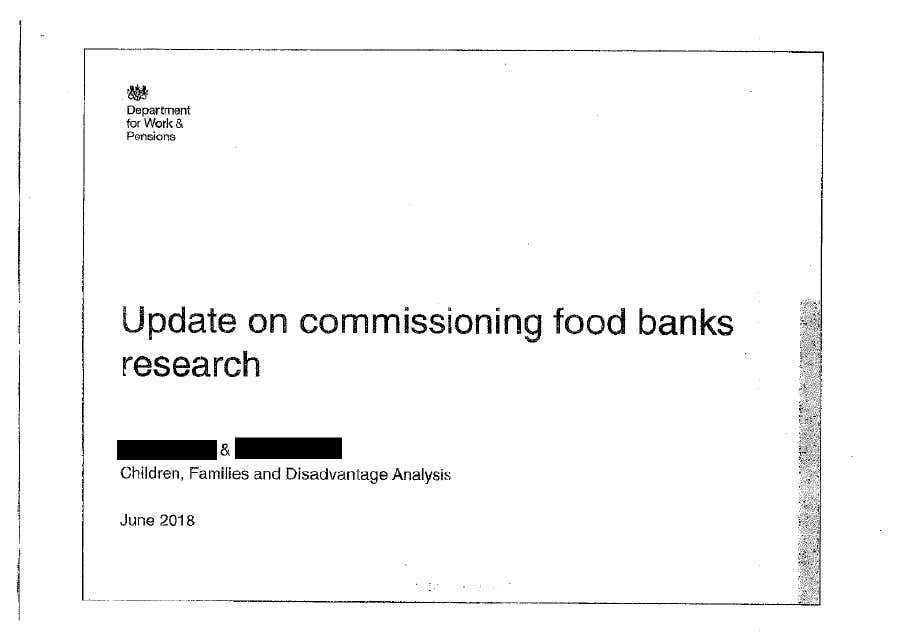 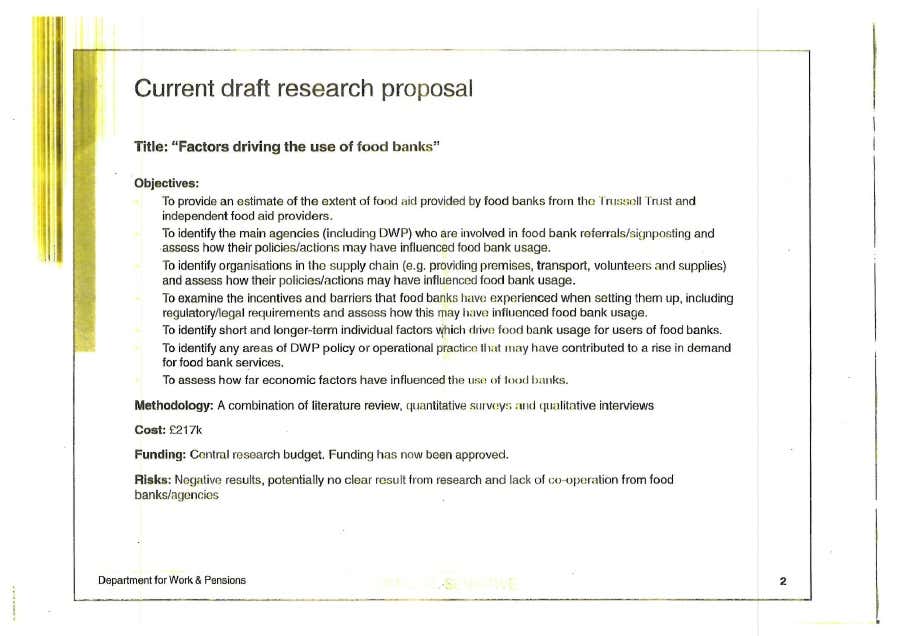 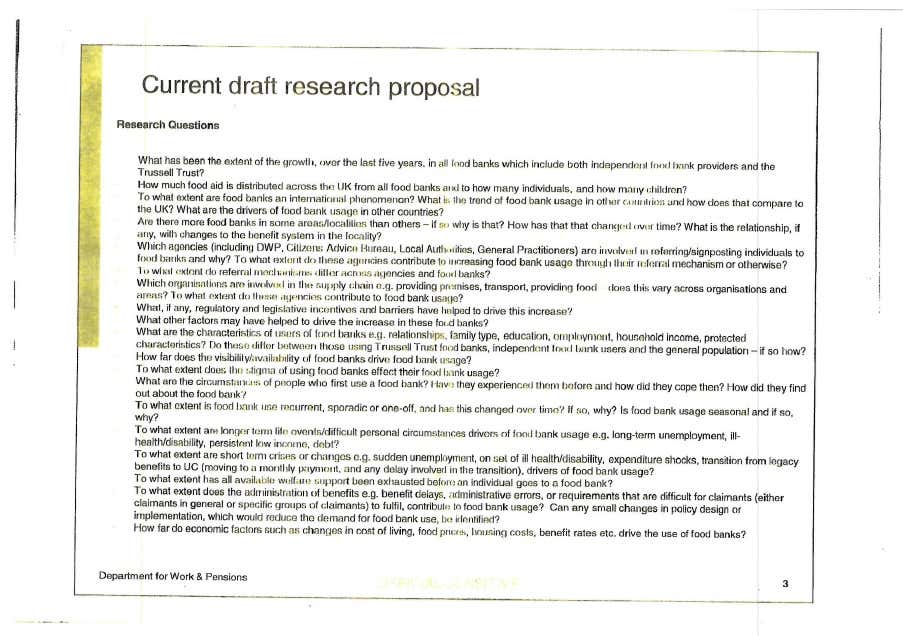 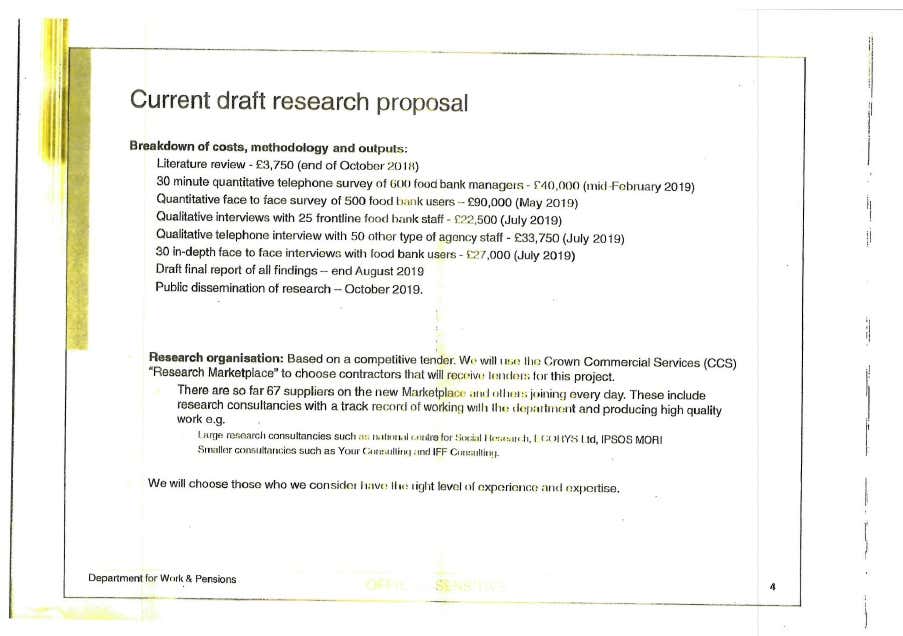 Since then, the DWP hasn’t said much else on the report and hasn’t released the report publicly, despite saying it would. This was due to happen in October 2019. But now, an SNP MP has stepped in. On 28 January, Chris Stephens asked the DWP if it would:

place in the [House of Commons] Library a copy of the evidence review undertaken… on the drivers of food bank use, that was commissioned in 2018…

On 5 February, DWP parliamentary under-secretary Will Quince replied. He said:

The literature review on the drivers of food bank use will be published in due course; at which point it will be placed in the Library.

So MPs, and the public, are still in the dark over this “sensitive” report. The Canary asked the DWP for comment. We wanted to know:

A DWP spokesperson told The Canary they ‘didn’t think’ they could “add to the statement” given by Quince “at this time”. They also added the DWP would “publish” “further information… in due course”.

“We will not rest”

But Stephens is not happy. He told The Canary:

It is now vital that the DWP publish this review so that MPs can debate and discuss what measures are necessary… [to] tackle the scourge of too many of our fellow citizens relying on foodbanks to survive daily living.

From my experience it is clear that the five-week wait for Universal Credit is driving too many into poverty. We need a social security that works and is a safety net for the poorest and most vulnerable in society. We will not rest until this is achieved.

Now, he has submitted an Early Day Motion (EDM) to parliament. In theory, it’s a motion which will initiate a debate. But EDMs rarely get that far. They do, though, serve as a way for MPs to raise the profile of issues. Moreover, MPs can sign EDMs for issues they support, which shows how many MPs agree on an issue.

So the more MPs that sign the EDM, the better. You can help by contacting your MP and asking them to sign it. The link to contact your MP is here.

Stephens’ work is crucial, because foodbank use is hitting many people hard.

Disabled people and children: at the sharp end

As the Trussell Trust found, 22% of its referrals were lone parents, and 11% were couples with children. Moreover, many sick and disabled people used foodbanks. The Trussell Trust report said:

Ill health was a common experience among households using food banks: nearly three-quarters reported that someone in their household had a health issue. Poor mental health (including stress, depression and anxiety) was the most common health issue, affecting slightly over half of households referred to food banks. A quarter of households had a member with a long-term physical condition or illness, and over a third (37%) had someone whose daily activities were limited ‘a lot’ due to health issues.

So, whether the DWP’s report will address these issues remains to be seen. Campaign group BENEFITS NEWS was furious. It told The Canary:

It is absolutely astonishing that the DWP knows it’s been rumbled multiple times. People aren’t daft. Slip up after slip up, Tory and DWP wrongs are rife. But they still carry on, as if nobody has noticed.

All they ever try to do is drag out and bury bad news on purpose.

These people are not fit to be in charge of vulnerable and poor people in society. Also, we mustn’t forget it was the Tories’ ‘difficult decisions’ that caused a massive increase in foodbank reliance. Also, if person can only use a foodbank three times, what do they do the rest of the time? There is no shovel big enough for the Tories, who are digging themselves into an ever growing sink hole.

If and when the DWP releases its report, it will likely cause shock waves. This will be in one of two ways. Either, as the DWP noted in its briefing, the report will expose the “negative” impact of DWP policies. Which means the DWP will finally have to accept it causes people to use foodbanks. Or, the report will be a whitewash and the department will let itself off the hook. But either way, it must release this information. Not doing so would be a staggering turn of events for the DWP, which already fails countless people on a daily basis.

Featured image via The Guardian – screengrab and Wikimedia – UK Government