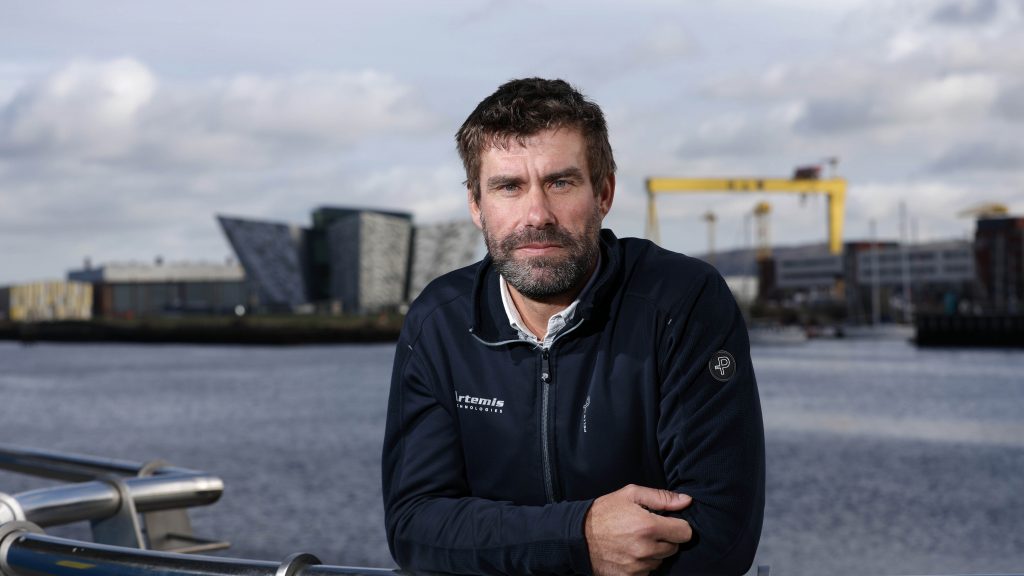 A double Olympic gold medallist is skippering a bid to make the UK a world leader in zero-emissions passenger ferries.

Sailing champion Iain Percy is combining his own know-how from designing America’s Cup racing yachts with expertise from the maritime, aerospace and F1 racing industries to develop what he calls a “plane underwater”.

Southampton-born Percy, 43, has chosen Belfast – a city with a rich ship and aircraft building heritage – as the location for the eco-friendly hydrofoil technology.

His consortium – which includes leading manufacturers such as Bombardier UK and universities and local councils in Northern Ireland – is currently vying for a £30m government grant to part-fund a £60m research and development project.

The green-energy ferries will use the same hydrofoil technology that has transformed America’s Cup sailing in the last decade.

The boat will have hydrofoil “wings” under the surface of the water that are attached to the hull with vertical struts.

Much like a plane taking off on a runway, the wings drive the hull up and out of the water as the vessel picks up speed.

That enables the craft to travel with its entire hull, bar the wing struts, raised above the waves – thus reducing drag, and fuel costs, by a dramatic 90%.

With significantly less energy required to cut through the water, the ferries no longer need the power of traditional diesel engines, and can instead operate with small electric motors similar to those used in Formula E racing cars.

Percy said the aim is to generate that electricity from renewable sources, thus creating a zero-emissions craft.

The hydrofoils can also be retro-fitted to existing ferries to transform their energy use.

Percy said: “Think of a boat sitting on top of an aeroplane is the best way to describe it.

“We all know that when we are sitting on a plane and we go down the runway, eventually a combination of going faster and the wings having their flaps down, the plane eventually takes off.

“It’s no different than that underwater, only water is a lot denser than air – 1,000 times denser – so the wings themselves are a lot smaller.”

Percy is the chief executive of Artemis Technologies, a spin-off of the America’s Cup team, Artemis Racing.

He won sailing gold at the 2000 Sydney and 2008 Beijing Olympics – on the second occasion alongside life-long friend Andrew Simpson, who later died in a tragic sailing accident in the United States in 2013.

With Bombardier’s hi-tech wing-manufacturing plant sitting adjacent to Belfast’s expansive shipyards, Percy said the city is the perfect location for a business that combined both industries.

“We are effectively a wing in the water, so we’re a perfect marriage of those two industries and Belfast is uniquely placed to really world lead in what’s going to be a new transformative technology,” he said.

“This is a real transformative technology and because of that the growth can be huge.

“We believe that from here in Belfast there can be a huge export-led business that can make a real difference to emissions globally.”

The consortium is through to the final round of a competitive process to secure support through the government’s new Strength In Places innovation fund.

It is the only Northern Ireland bid still in the mix for a grant and the only maritime-focused project.

Unlike several of the other bids, the consortium is also underpinned by a significant financial commitment – £30m – from its commercial members.

Percy, who was made an OBE in 2009, said he hopes for a positive result when the final Strength In Places awards are announced in the coming weeks.

He admits he has had a “funny path” from the Olympic podium to the design studio.

“I started as a sailor competing in multiple Olympics and America’s Cups but slowly migrated more to the technical side of our sport,” he said.

“One of the great things about the America’s Cup is not only is it a sporting challenge it’s very much a design and engineering challenge as well, so, through leading America’s Cup teams, I became more involved in the office maybe than on the water in my older age.

“But that has naturally led on to a passion for zero-emissions travel.

“Sailing has been zero-emissions and transporting our goods for thousands of years, so to be able to return to zero-emissions maritime transportation is something that I am very passionate about and it was a natural next step.”