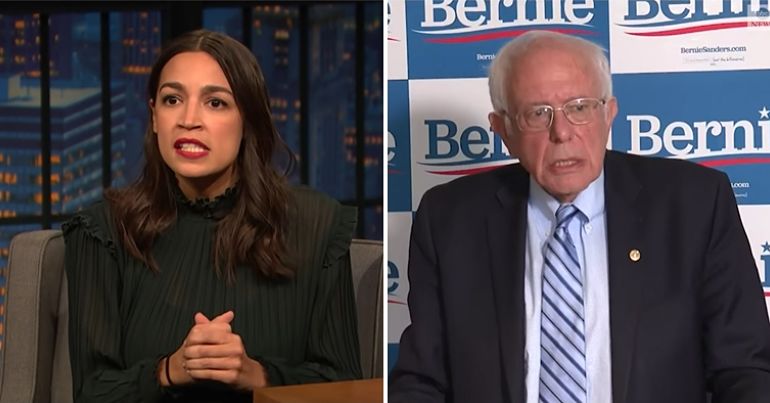 On 6 March, host of Al Jazeera’s UpFront Mehdi Hasan interviewed Lindy Li from the Joe Biden campaign. Li said she would “absolutely not” vote for Bernie Sanders if he became the Democrat nominee in the US presidential election.

So Hasan then asked if she’d be “okay with a second Trump term?” She replied:

I’m absolutely not okay with it, but I’m also – almost probably equally terrified and traumatised by the prospect of a Sanders presidency right now.

With @SenSanders and @JoeBiden the two last men standing in the primary, will Democrats be able to put differences aside to beat Donald Trump? @mehdirhasan asks Lindy Li and Linda Sarsour. Full debate: https://t.co/IWSX3DxRCb pic.twitter.com/kL4RVS4D4d

Congresswoman Alexandria Ocasio-Cortez couldn’t believe such ‘profound irresponsibility’. So she made her own position crystal clear:

I am constantly asked if I‘d support the Dem nominee. Could you imagine if I said I wouldn’t?

Yet Biden’s camp is on TV threatening to help Trump if they don’t get exactly what they want.

This is profoundly irresponsible on all ends. Our country is not a game. Get it together. https://t.co/weMGOCi89O 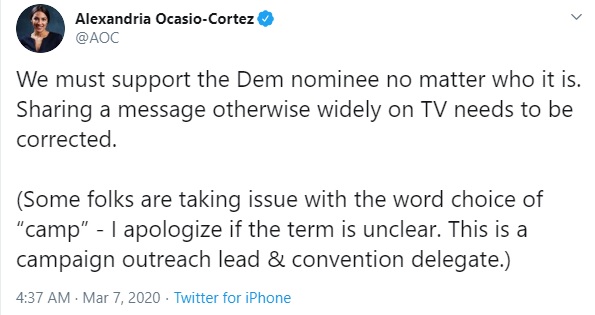 Other people also took to social media. They were aware of the dangers of reelecting Trump. This person reminded us what a Trump presidency has meant for immigration:

And this person reminded us of the damage Trump could do to the justice system:

DeLuca added that Li caused concern when she tweeted that Sanders “lavishes praise on communist Russia” and other “Communist regimes”. She also taunted Sanders supporters:

#BernieSanders, who praised Communist regimes and joined a socialist party that took Iran’s side during the hostage crisis, is a grave risk to American democracy.

Get at me, #BernieBros. Do what you do best: excel in hate.https://t.co/HTzJ0Co4Wq

Additionally, Li retweeted someone else’s tweet stating that Sanders was a “self-hating Jew”. She later deleted that tweet and apologised. Her position today is in stark contrast to her position in 2018 when she supported Sanders:

The US presidential election takes place on 3 November 2020. And the need to remove a racist, sexist, Islamophobic, homophobic president from the White House is clear.

So when Hasan asked Sanders supporter Linda Sarsour in that same interview if she’d vote for Biden if he became the nominee, she said she “would do the right thing”. A total contrast to Li’s response.

Sanders is the best placed candidate to stop Trump. And there’s so much at stake in this election. So how anybody could be “equally terrified” at the prospect of Sanders becoming president is beyond belief. This is a time for unity.