As billionaire-backed Buttigieg drops out, Sanders is even better placed to defeat Trump - The Canary 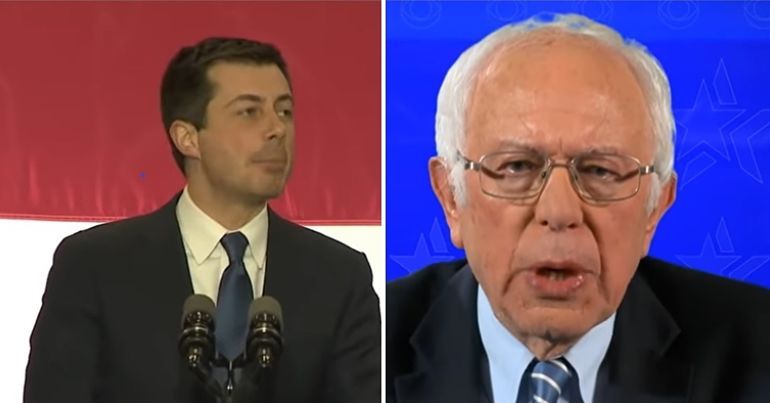 On 1 March, right-wing sweetheart Pete Buttigieg dropped out of the Democratic Party contest to face Donald Trump in this year’s US presidential election. This was after suffering another loss in a Democratic primary – this time in South Carolina.

While Buttigieg was relatively unknown before this campaign, the former Indiana mayor got funding from CEOs in the fossil-fuel industry and from Wall Street; the billionaire class.

In short, his campaign didn’t exactly represent ordinary working people. So when the news that he quit hit social media, people were clear about who they wanted to represent them against Trump in November.

The candidate of choice

Another person stressed the important issues at play: 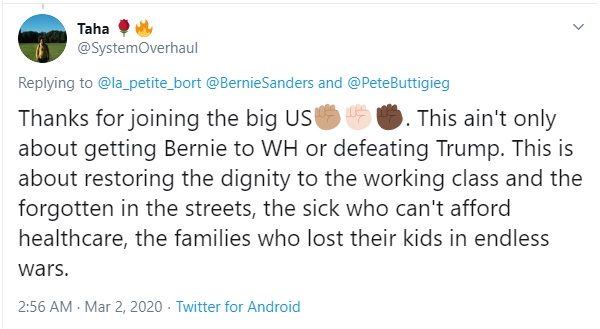 Buttigieg started the campaign by taking a slight lead amid voting confusion in the Iowa primary. This confusion arose because the system for reporting votes failed.

But Buttigieg failed to build on that in the following two primaries in New Hampshire and Nevada. Sanders won both. And most recently, Buttigieg performed poorly among Black Democrats in South Carolina.

There could be a more cunning reason behind his exit, though, other than his lack of popularity: 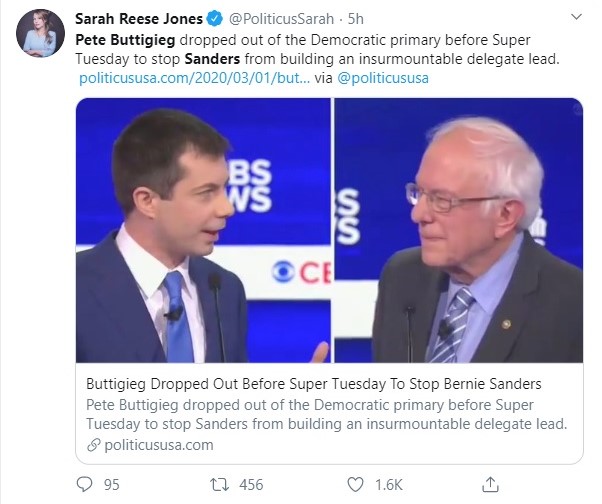 Indeed, it’s no secret that he opposes the politics that Sanders stood and stands for:

Another centrist also bites the dust…

With Buttigieg and Klobuchar withdrawing, the centrist lane is consolidating. Meanwhile, Warren is remaining in the race despite having no path.

This is an admitted effort to force a brokered convention in the event that Bernie Sanders has the plurality. It would re-elect Trump

Klobuchar just dropped out of the presidential race, hours after Buttigieg.

But Warren is staying in, because she's helping right-wing neoliberal Democratic Party elites split the "progressive" vote and take delegates away from Bernie.

This is all about stopping Sanders.

There’s only one candidate

Despite Buttigieg’s hostility to Sanders, some polls now show that many of the former’s supporters may now back Sanders (previous data suggests this may also be true of Klobuchar’s supporters). And this is support Sanders would welcome.

The thinning of the centre-right field in the race, however, will undoubtedly give a boost to longtime establishment favourite Joe Biden. So Sanders, being aware of this, is keeping his assessment of his main rival clear:

We will not defeat Trump with a candidate like Joe Biden who voted for the Iraq War, tried to cut Social Security and supported NAFTA. pic.twitter.com/Lk7U7JDS21

In short, Sanders is the only main contender in the Democratic primaries who truly represents the interests of ordinary people. And he represents their interests on social justice, health, the economy, and the environment. Indeed, polls consistently show Sanders beating Trump in a head-to-head contest. So he’s perfectly positioned to take down Trump and restore voters’ trust in democracy.