While Nicola Sturgeon is praised by the UN, Theresa May is taken to court. Repeatedly. - Canary 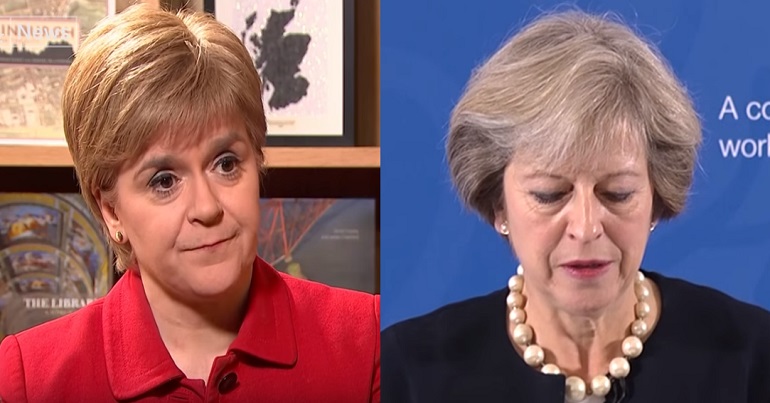 The UN body on climate change took to Twitter on Wednesday 4 April to praise the Scottish government’s actions on climate change; specifically what it called its “innovation” in renewable energy:

#Scotland has responded to the challenge of #ClimateChange with innovation https://t.co/AqJlVkU7zT 68.1% of the country’s electricity needs were met by #renewables in 2017 #ClimateAction #Talanoa4ambition pic.twitter.com/Jiyl1PrXTF

As The National reported [paywall], renewables made up an estimated 68.1% of Scotland’s gross electricity consumption in 2017, up 14.1 percentage points from 54% in 2016. What’s more, Scotland sent more electricity to England than ever before, and it also generated 25% of all UK renewable electricity.

These figures show that Scotland’s renewable energy sector is stronger than ever and has a strong pipeline of further projects still to be constructed.

Despite damaging policy changes from the UK Government that will soon come into full effect, we continue to harness, galvanize and support Scotland’s renewables potential, both in generation and infrastructure.

But south of the border, it’s a slightly different story.

On Thursday 5 April, figures from the Labour Party revealed that the UK government had spent over half a million pounds fighting court cases on air pollution. The actions, all brought by legal campaign group ClientEarth, saw the government taken to court on three occasions. The most recent case saw a judge rule that May’s government can be brought back to court as many times as needed until it starts acting within the law.

Air pollution is directly linked to around 40,000 early deaths every year. Despite this, the UK government has repeatedly been allowing air pollution levels to breach legal EU limits. The EU, the UN and the World Health Organisation (WHO) have all criticised the UK government’s track record on air pollution. But so far, it has done little to act.

What’s more, in 2017, the UK government was taken to court by another campaign group – Plan B – over climate change. The group believes the UK government is breaching its obligations under the Climate Change Act 2008, and specifically its carbon target for 2050. Plan B has launched proceedings for a judicial review into May’s governments actions, and is waiting for a decision from a judge.

The SNP vs the Tories

Compare and contrast: the UN thinks one government is ‘innovating’ on climate change, but another repeatedly acts illegally and has been taken to court over it. The difference? A border and a political party.

– Support ClientEarth, support Plan B on Twitter and donate to its crowdfunder.