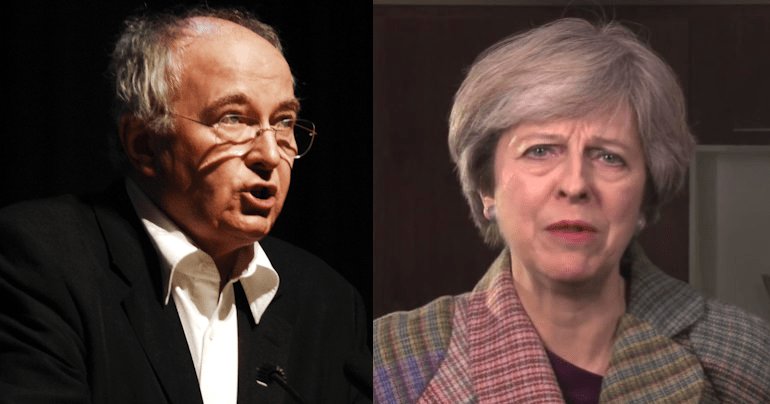 Philip Pullman has announced that he ‘despises’ Theresa May’s government in a scathing takedown. The author of His Dark Materials focused his attack on the Conservative government’s treatment of the children of the ‘Windrush generation’. He branded the Home Office “grotesque, brutal, sadistic” for the bureaucratic nightmare it appears to be putting people through.

At the request of the post-war British government, many people moved to the UK from the Caribbean to help rebuild the country in the 1950s and 60s. This was the Windrush generation.

But now, stricter immigration rules mean they are having to produce documentation they don’t have in order to prove they are in the UK legally. That’s despite living and working here for around 50 years.

Pullman lamented the volume of documentation the government is demanding these people provide. In the case of Renford McIntyre, government policy led him to become homeless. Even after he submitted paperwork to the Home Office showing 35 years’ worth of national insurance contributions, the government asked for more documentation. McIntyre has lived in the UK for 50 years and paid taxes for 48. McIntyre is one example of potentially thousands of individuals who are experiencing similar problems.

Expecting anyone to be able to provide at least one and preferably four pieces of documentary evidence that they were in the UK for every one of the past fifty years is grotesque, brutal, sadistic. I despise the people who run this country.

The strong response to the Conservative government’s approach has come from people and parliamentarians. A petition calling for “amnesty for anyone who was a minor that arrived in Britain between 1948 to 1971” has almost reached 150,000 signatures.

In parliament, Labour’s David Lammy led 140 MPs – including Jeremy Corbyn and Diane Abbott – in calling on May to find a “swift resolution of this growing crisis”. Lammy spoke out in the Commons, branding the government “inhumane”:

Provoking fury, home secretary Amber Rudd was unable to say how many people from the Windrush generation her department has deported in error.

The Conservative government is destroying people’s lives through incompetence, cruelty or both. And Pullman’s assessment of the Tory regime is bang on the money.

These politicians do not represent us.

-Sign the petition calling for amnesty for minors who arrived in Britain between 1948 to 1971.