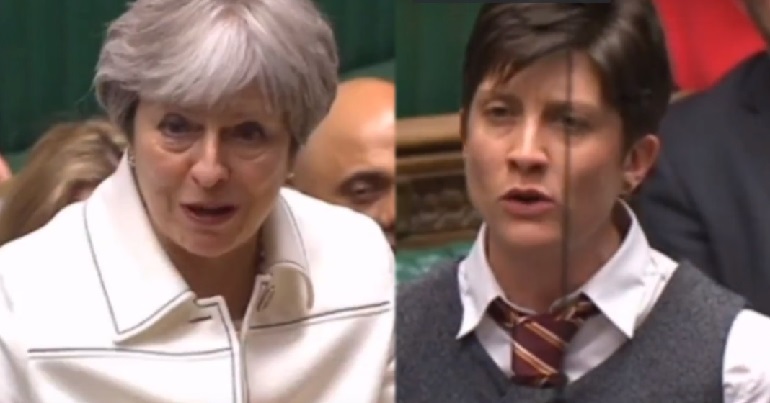 On 16 April, Theresa May faced questions from MPs about the 14 April airstrikes on Syria, which the prime minister undertook without parliamentary approval. And a Scottish MP asked the question on the lips of everyone who opposed the military intervention.

Glasgow Central MP Alison Thewliss spoke about roughly how much the government’s Syrian mission was likely to have cost. And with this in mind, she asked:

How much money is the prime minister willing to invest in winning the peace in Syria and rebuilding?

8 Storm Shadow Missiles cost £6,320,000
Deploying an RAF Torndado GR4 reportedly costs £35,000 per plane per hour.
I asked the Prime Minister how much she is willing to invest in building peace in #Syria.
https://t.co/VxkdUCgC5A

The Scottish National Party has called the current approach of May’s government “anti-democratic”, insisting that a parliamentary debate should have preceded any military action.

Theresa May responded to Thewliss by saying the UK had invested significantly in Syrian refugees.

Labour MP Alison McGovern, however, insisted that the government’s commitment to accept 20,000 displaced people by 2020 was “not good enough”, and that it amounted to just 4% of the number of people Germany has taken in.

We acted because the Syrian regime was using chemical weapons, [and] had done so on a number of occasions…

But Scottish first minister Nicola Sturgeon has argued that the airstrikes were “launched before any evidence had been presented by chemical weapons inspectors”, and felt “more like the latest act in a power play between presidents Trump and Putin than any serious attempt to resolve the conflict in Syria”.

Also, regarding previous allegations, even current US defence secretary James Mattis admitted in February that his country could not confirm that the Syrian regime had used the chemical weapon sarin on its citizens, saying “we do not have evidence of it”.

The assertion that Britain must oppose crimes against humanity abroad makes sense. But it makes less sense when employed selectively. Theresa May isn’t suggesting attacking Saudi Arabia for bombing Yemen to bits, for example. Nor is she rallying against Burma over its alleged genocide against the Rohingya people, against Turkey over its anti-Kurdish war crimes, or against Israel over its brutal treatment of Palestinians. If anything, May has been cosying up to anti-democratic regimes and helping to seal arms deals with them.

But aside from being morally hypocritical, Britain’s airstrikes on Syria are also – as Labour leader Jeremy Corbyn has said – “legally questionable”. In fact, international lawyers believe they are “illegal… acts of aggression”.

“The Prime Minister is accountable to this parliament and not to the whims of the US President.”

Jeremy Corbyn calls for greater scrutiny on military action and says the strikes were “legally questionable”, while Theresa May says she took action to ease humanitarian suffering. pic.twitter.com/0eDnO4USvO

Rather than more war, how about building peace?

Following international legal procedures and waiting for firm evidence may not be a quick process. But that doesn’t mean bypassing such procedures is a good idea.

If we want to lead the way as a nation, we need to stop contributing to human suffering by selling arms to anti-democratic regimes. We need to stop treating war crimes differently depending on who’s behind them. And we need to show that we respect international law.

Maybe if we lead by example – and invest in peace instead of war – we can regain the respect we’ve lost internationally by consistently acting like a lapdog to US war hawks.

– Write to Theresa May and your MP to demand an evidence-based foreign policy that complies with international law.