A reporter finally entered the ‘chemical attack’ site in Syria. What he found is extraordinary. - Canary 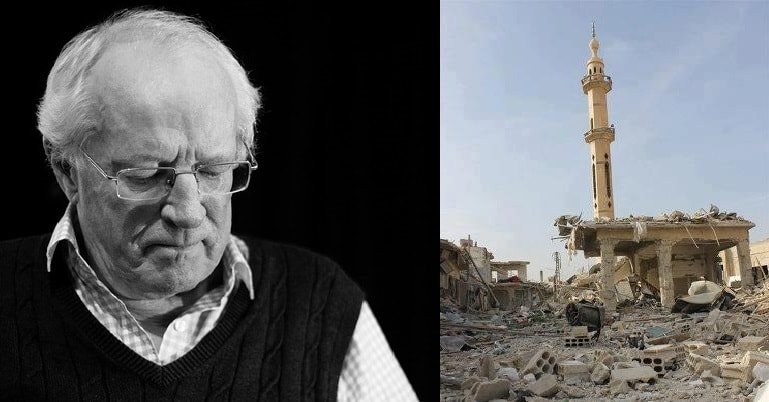 Robert Fisk, winner of several national and international journalism awards, has visited the city of Douma in Syria, where Western governments say the chemical attack happened. By the look of things, he’s got some extraordinary findings.

“Suffering from hypoxia, not gas poisoning”

The correspondent for The Independent reported the testimony of a senior doctor. Dr Assim Rahaibani works at the Douma medical facility where the images and a video of people allegedly suffering from chemical violence originated. Recalling the scenes on the 7 April, the doctor said:

I was with my family in the basement of my home three hundred metres from here on the night but all the doctors know what happened. There was a lot of shelling [by government forces] and aircraft were always over Douma at night – but on this night, there was wind and huge dust clouds began to come into the basements and cellars where people lived. People began to arrive here suffering from hypoxia, oxygen loss. Then someone at the door, a “White Helmet”, shouted “Gas!”, and a panic began. People started throwing water over each other. Yes, the video was filmed here, it is genuine, but what you see are people suffering from hypoxia – not gas poisoning.

While Dr Rahaibani said that the images and film are real, he claims that patients were not treated for exposure to chemicals. Instead, the 58-year-old says the underground clinic treated people for oxygen starvation as a result of heavy shelling from Bashar al-Assad’s regime.

“11 people at least including 5 children had suffocated”

The doctor’s account is consistent with reports from the Syrian Observatory for Human Rights (SOHR) on 7 April. While the corporate media usually quotes the UK-based SOHR, mainstream journalists have not done so this time. Contrary to the dominant narrative, the SOHR has not reported on any chemical attack in Douma. Rather, the organisation wrote that “heavy and intense shelling” meant that “11 people at least including 5 children had suffocated”.

The SOHR has three reports from 7 April detailing injuries and fatalities from people starved of oxygen.

There are the many people I talked to amid the ruins of the town who said they had “never believed in” gas stories – which were usually put about, they claimed, by the armed Islamist groups.

But Western powers have already dropped bombs. Before a watchdog could look into whether a chemical attack happened, the US, UK, and French governments launched airstrikes against the Syrian regime on 14 April. Neither Theresa May nor Emmanuel Macron sought approval from their respective parliaments when they took military action against a foreign state. Donald Trump also ignored congress, attacking Syria using ‘executive power’.

How could it be that Douma refugees who had reached camps in Turkey were already describing a gas attack which no-one in Douma today seemed to recall?

The journalist, who has also won Amnesty International press awards three times, said many residents responded to his questions about gas with “what seemed genuine perplexity”. Living in a war zone may make it difficult to check the news, but this is the site where the news supposedly happened.

Fisk seems perplexed why victims of the attack did not hang around in Douma when the government took over the area. And doesn’t seriously deal with the fact that those who stayed behind might not be able to speak freely.

A different kind of bombshell

The chemical weapons watchdog has still not arrived on the scene. Since the US-led bombing, Western diplomats have accused Russia and Syria of preventing the Organisation for the Prohibition of Chemical Weapons from entering Douma. Denying this, Russian deputy foreign minister Sergei Ryabkov claimed that the US-led airstrikes caused the delay.

But Fisk did not appear to have trouble entering the site. The renowned journalist said he explored Douma “without soldier, policeman or minder”. On top of other accolades, he has won the Foreign Reporter of the Year award seven times and the Journalist of the Year award twice, and he speaks Arabic. From the ground in Douma, Fisk reports that locals say a chemical weapons attack did not happen. If true, that is a bombshell of a different kind.

– Write to Theresa May and your MP to demand an evidence-based foreign policy that complies with international law.