A thinktank has warned that any deal Theresa May does with the EU over Brexit will leave the UK worse off in the long run.

The thinktank Global Future has analysed each of the four possible deals the PM has tabled. These are leaving the EU but:

Global Future worked out how much each deal would reduce money available for public spending by. It found that [pdf, p2], by 2033/34, the models would cost us, per week (in 2018 prices):

It also put the figures into the context of current NHS spending, and found that the models would cut [pdf, p2] NHS spending by 9%, 31%, 44% and 22% respectively. In terms of broader public spending, Global Futures noted [pdf, p7] the 2018 weekly cost of various department versus the cost of each deal: 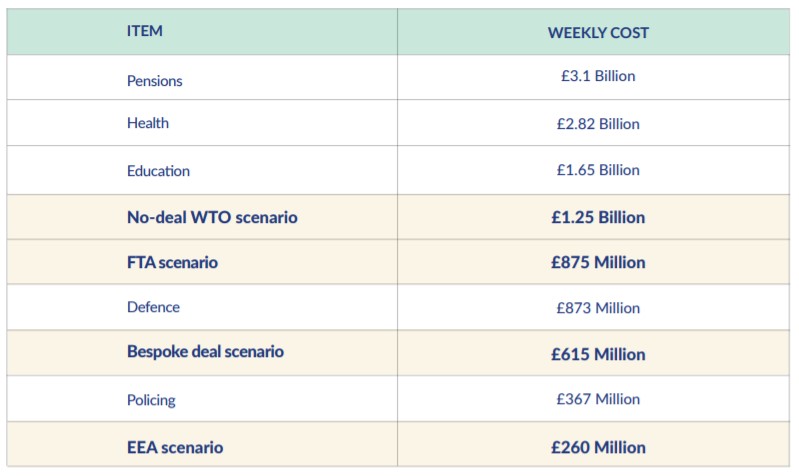 A price worth paying?

In conjunction with its report, Global Future also conducted public polling about its findings. It said:

Leavers and the public at large reject every Brexit deal modelled by government, and ministers’ own preferred scenario (EEA, FTA, WTO, a bespoke deal), as ‘Too High a Price’ to leave the EU by enormous majorities.

The vast majority of Leavers regard each deal as worse than they had hoped when voting to Leave the EU.

Finally, we asked voted [sic], if forced to choose which deal they would like to leave the EU both Leavers (narrowly), and the public at large (by a significant distance), chose the EEA model (the so-called Norway option) as their preferred deal of those on the table.

Jonathan Portes, the professor of economics and public policy at King’s College, London carried out the research. He told the Guardian:

If we are to decide what sort of Brexit we want, the least we need is a menu, with prices. The one we have prepared represents the government’s current best estimates. It’s up to us to decide which of these prices is worth paying.