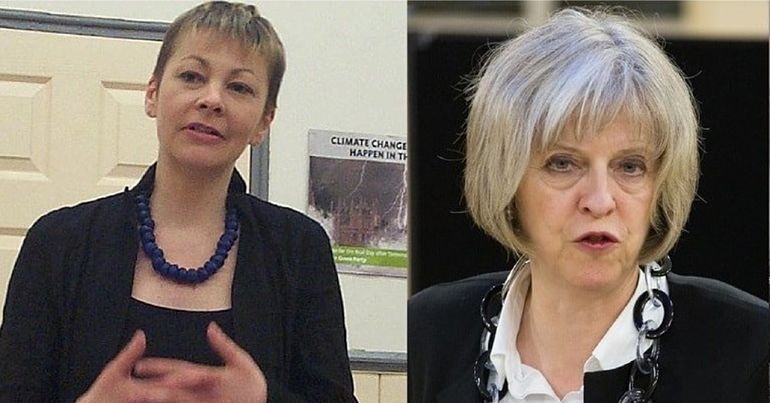 Caroline Lucas has spoken out over a glaring plot hole in Theresa May’s Syria story. Along with France, the Prime Minister joined a US-led bombing campaign against three Syrian government sites that they claim stored or researched chemical weapons.

But Green Party co-leader Lucas pointed out that “two sites bombed overnight on Friday were compliant with having no chemical weapons on site” as of five months ago.

Hold on, apparently these science centres are not actually involved in chemical weapons. The US-led coalition bombed one such site in Barzeh, Damascus. Workers at the Syrian research lab claimed the Organisation for the Prohibition of Chemical Weapons (OPCW) “has proven in two reports that this building and the centre as a whole are empty and do not produce any chemical weapons”. Rather, employees said the site produces pharmaceuticals such as cancer medicines.

In 2016, the OPCW reported that it had overseen the destruction of Syria’s declared chemical weapons. Many people have pointed out that the US, UK, and France have had the right to report any chemical weapons sites to the OPCW. They didn’t, instead now opting to bomb the sites they allege have chemical weapons.

PM fails to explain how – if the OPCW said 5 months ago the two sites bombed overnight on Friday were compliant with having no Chemical Weapons on site – the UK Govt since believes this had changed? When did they find out & did they ask OPCW to inspect? She doesn’t seem to know

Yet much of the media is still reporting May’s claim that the targeted sites had chemical weapons as fact. On 18 April, Sky News wrote:

Prime Minister Theresa May insisted it was morally and legally right to target three sites that stored or researched deadly chemical weapons.

Lucas’s point chimes with what the foreign secretary admitted on The Andrew Marr Show. Boris Johnson essentially said that the airstrikes would have little positive impact on the conflict beyond sending a “message”.

In short, it seems like there are two options. And neither are good for the NATO governments attacking Syria.

Either, the sites are not involved with chemical weapons, and the strikes were nothing more than theatrics. Or, Western powers have kept their knowledge of labs producing chemical weapons in Syria secret, rather than tackling the issue immediately. Lucas is right to raise the issue. Both possibilities are surely very dangerous.

– Demand no more attacks. Write to Theresa May and your MP.