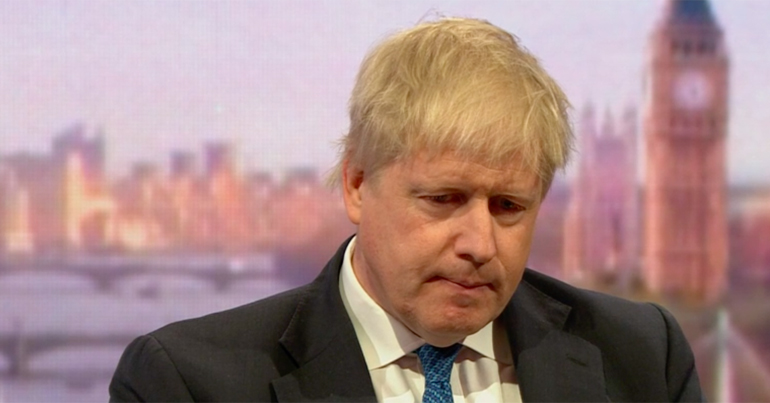 The fallout from the UK government’s decision to launch airstrikes in Syria took a bizarre turn on 15 April. During an interview on The Andrew Marr show, foreign secretary Boris Johnson essentially admitted that the Syrian airstrikes would have little positive effect on the country’s conflict.

Johnson appeared to make it clear that there was very little point to the strikes beyond sending a “message”:

This is not going to turn the tide of the conflict in Syria. One can hope that it encourages the Russians to get Assad to the negotiating table in Geneva, to get a political process properly going, but that is, as it were, an extra.

So Johnson effectively stated that a military intervention with massive possible ramifications was potentially pointless, outside of being a “message” that might serve as a deterrent.

So what was the point?

Marr also raised the question of whether the airstrikes had any significant effect on the Assad regime’s chemical weapon capabilities:

It’s also clear because we had to warn the Russians in advance of what we were doing, so we did not kill lots of Russians and start World War III, they will have told Assad, he has moved stuff out

Johnson said the strikes were successful on the sites they targeted. He continued:

The overwhelming purpose was to send a message that after years now in which we’ve seen a series of chemical weapons strikes… finally the world has said enough is enough.

Marr pressed Johnson further, echoing sentiments of journalist Rachel Shabi who appeared earlier on the show. He asked if Assad:

…can carry on killing people with barrel bombs and machine guns and bombs of all kinds as long as he doesn’t use chemical weapons?

I’m afraid that is the unhappy corollary of this, that if we say that we are limiting our action to chemical weapons… then, yes, of course it follows that the rest of the Syrian war must proceed as it were.

Johnson has now made it very clear that the airstrike was all about sending a message – a message which could potentially achieve nothing. And based on Johnson’s statements, it seems Assad is still free to continue killing Syrian people as long as he refrains from using chemical weapons.

So once again we ask, what was the point of all this?