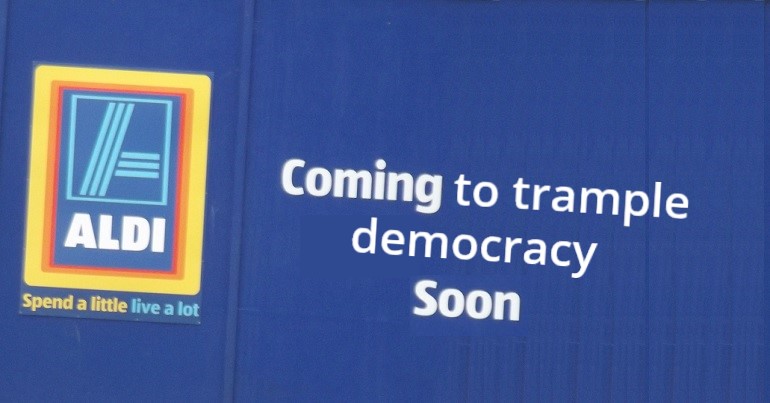 Aldi is embroiled in a row with a local council and residents over plans for a new store. But the supermarket giant seems unconcerned. Because it’s bypassed the local authority and gone straight to the government for permission to build.

The controversy surrounds Aldi’s plans for a new store on Old Horns Crescent in Great Barr, Birmingham. As BirminghamLive reported, the company originally submitted plans in 2016 for the supermarket which is on a ‘designated site of importance for nature conservation’. The area also contains trees which have protected status and is on the edge of the Queslett nature reserve:

Consequential adverse impacts in the provision of open space, lead to the loss of an important ecological asset, have an adverse visual impact and adverse impact on the environment as well as road safety and also heighten potential flood risk.

As the Express and Star noted, Gul was particularly critical of Aldi’s proposals to limit the impact on the nature reserve. It reported:

However Mr Gul said: ‘No costing of the off-site compensation offered has been provided and the measures proposed will not achieve the necessary ecological benefits for the adjoining nature reserve’.

So, Aldi shelved that set of plans before the council had a chance to reject them. But not to be beaten, it made a new set of plans and a second planning application to the council. The council promptly rejected that one as well. Local councillors called the site a “green lung for the city dealing with pollution” – noting that the existing trees “are much better at absorbing nitrogen dioxide”.

But Aldi is like a dog with a bone. It has now appealed to the Department for Communities and Local Government (DCLG) over Birmingham City Council’s decision. It will be heard on 1 and 2 May, where a DCLG-appointed inspector will decide Aldi’s, and the woodland’s, fate. But councillors and local people are not happy.

I feel sad that Aldi could not make a compromise regarding their planning application for Old Horns Crescent. Clearly the destruction of so many protected trees is a major factor for Birmingham City Council’s objections.

The protection of these trees will also help safeguard the wildlife on the neighbouring nature reserve and, even should money be made available to help the reserve, it would not make up for the damage done.

Aldi, I understand, have a reputation for caring for the environment however, in this case, has clearly gone out of the window.

The Canary asked Aldi for a statement. But a spokesperson said the company did not wish to comment on the situation.

Locals, though, are furious. Community group the Friends of Queslett Nature Reserve, which formed 11 years ago, has launched a petition to try and stop Aldi’s plans. It said it is:

Completely opposed to Aldi… building a store on land that is directly adjacent to the Queslett Nature Reserve. With concerns that the building and placement of this store will have adverse effects on… [it] and the surrounding area with [an] increase in traffic… pollution, noise and there will be an increase in litter and dumped trolleys on the reserve…

The area is already at saturation level with food stores. With the existing Asda in Old Horns Crescent. Aldi already have a store half a mile down to road from the planned site. And there are two more Aldi supermarkets in a 2 mile distance as well as small independent shops. Co-op and a Tesco at New Oscott.

Sadly, Aldi has form for trampling over local democracy. Because it’s done exactly the same thing in Gloucestershire, Surrey, and Dorset. The local council and campaigners will be hoping on this occasion the government sees sense. But they’re probably not holding their breath.

– Support Friends of Queslett Nature Reserve on Twitter, join in with the social media Thunderclap and sign the petition against Aldi’s development.